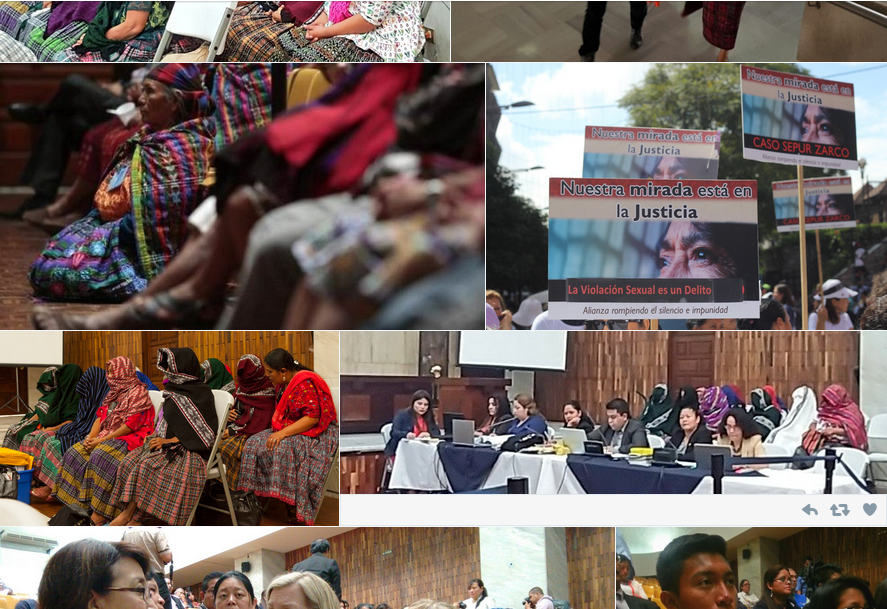 Screenshot of images shared via Twitter after the Sepur Zarco verdict was announced.

A Guatemalan court handed down a landmark ruling Friday in a case against two retired military officials. In the 1980s, they presided over a base where systematic sexual violence was used as a weapon during the country’s brutal civil war. Shannon Young reports.

Before handing down a combined sentence of 360 years to two retired Guatemalan military officials, Judge Yassmin Barrios spent more than an hour summarizing the facts established in weeks of gut-wrenching testimony. Survivors of a brutal military campaign against the indigenous civilian population of Sepur Zarco described how soldiers systematically disappeared the community’s men and then subjected their female relatives to repeated gang rapes and enslavement.

“The investigation into the cultural implications determined that the systematic rapes of the women of Sepur Zarco resulted in fractures in the culture of the community,” she read. “This means that the rapes and the subordination into forced servitude damaged the victims themselves, their family units – which were destroyed, but it also affected the entire community. This kept them from recovering their culture and returning to normal life.”

The military set up camp near Sepur Zarco in 1982, after the community began to organize for legal titles to their lands, located in an area dominated by politically connected large landholders. Soldiers accused local men of providing material support to guerrilla forces and violently detained them in their homes or while in transit. Many were never seen again.

Some of the women who testified at the trial said the gang rapes began when they went to the base to search for their detained husbands. The women – who described hearing the screams of tortured detainees and seeing a mass grave site on the base – were also forced to perform domestic chores at the facility, like cooking and laundry.

When she delivered the sentence, Judge Barrios said that the military strategy wasn’t one of total extermination of the population, but rather of subordination through terror: “There was a strategic design to pulverize the community fabric and destroy its productive capacity. A routine of regular disciplinary acts was put into practice. It wasn’t just about fulfilling the sexual appetites of the troops. Rapes were a part of the war.”

The Sepur Zarco case is the first in which a domestic court has tried military figures for the use of sexual violence as part of a strategy of war. The judges also awarded survivors monetary damages from the government because of the counterinsurgency campaign was a part of official policy at the time. A hearing to determine the amount is scheduled for Wednesday, March 2nd.