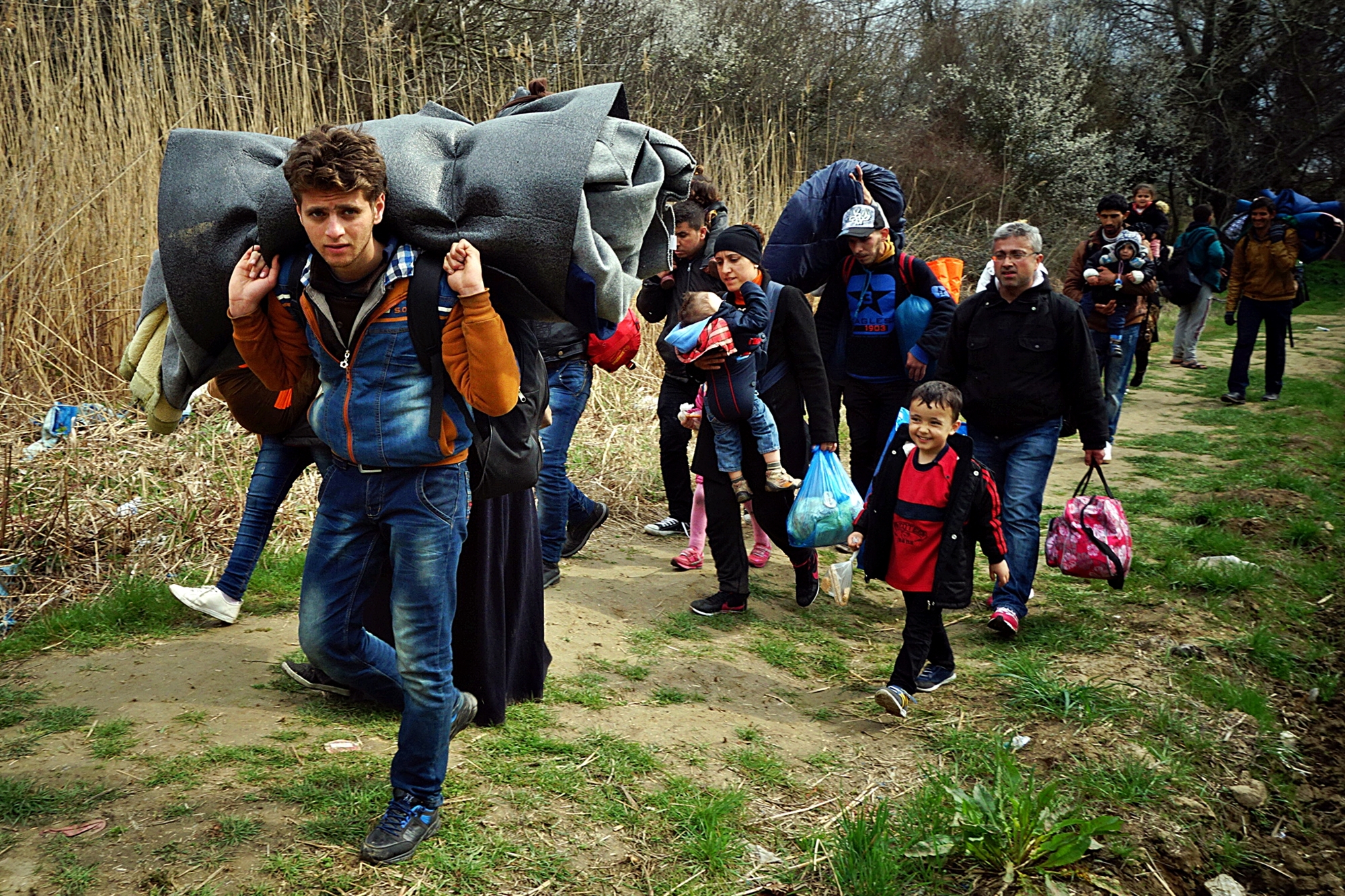 No matter day or night, the flow of refugees towards the camp is constant across Greek fields. (Photo credit: Filip Warwick)

The pace of migrants trying to travel through the Balkans to northern Europe continues unabated. The most recent crisis point is at the border between Greece and Macedonia. More than ten thousand people are now stuck in a quickly expanding and deteriorating encampment there, after five countries further along the route recently joined in strict limits on the number of people they would admit, with each only admitting as many as the next country north receives. The result was a domino effect falling toward Greece – the major point of entry to the continent.

Macedonia says it will allow just 580 migrants per day, and only Syrians and Iraqis. But with more than a thousand people arriving every day from countries like Eritrea, Iran, Pakistan and Afghanistan, the human bottleneck is growing on the Greek border. FSRN’s Filip Warwick is at the encampment, and files this report.

Just a stone’s throw from the Greek-Macedonian border lies the bucolic village of Idomeni. Nestled between rolling hills, the local population stands at just about 150 people. But walk a half-a-mile east, and you’ll find 11,000 refugees living in what is quickly becoming a massive and squalid makeshift refugee camp.

Greek taxi driver Dimitris Christopoulos stops his cab on the outskirts of Idomeni. He’s just arrived from Greece’s second largest city, Thessaloniki, dropping off a refugee family of 3 adults and 4 children. The influx is particularly acute in Greece, and Dimitri says he’s not sure if other EU countries are doing enough to help alleviate the pressure.

“I don’t know if [they] help, but help here, it’s not coming to the Greek people. It’s not coming, the help. We don’t feel the help,” Christopoulos says. “I feel alone, to my country, you know? I feel a stranger to my country. What can I do?”

The refugees and migrants stuck here come from the Middle East and North Africa, hoping to find sanctuary in countries of the European Union, like Germany and Austria.

The camp is expanding almost exponentially after countries farther along the Balkan migration route clamped down on border crossings, causing a bottleneck at Greece’s border with Macedonia.

During the past several days, hundreds arrive on foot every few hours. The camp was designed to hold 1,500 people. Five days ago there were 5,000 here; three days ago 7,000. And this morning the number tipped the 10,000 mark.

Ibrahim Bilko, is a 20-year-old economics student from Aleppo. He’s been here for 10 days now, yet even amid the deteriorating conditions at the camp, he remains hopeful.

“We bring the children here because we need for those children a future,” Bilko says. “They have to study, they have to work, they make the new future of the Syrian people, because we lost our future already in Syria from the war, so we have to make a new future for Syria. And I hope so someday we come back to Syria and see the future again.”

As the bottleneck grows, the camp is overwhelmed. Kaniuor Ali, a Kurd from Damascus, has been here for two weeks as conditions have grown increasingly squalid. The 29-year-old building decorator says humanitarian aid from the UN is largely absent.

WASH refers to the most basic of aid: water, sanitation and hygiene. For about two months, Vicky Markolefa has been part of the MSF team in Idomeni, providing both medical care and basic necessities. She says they are trying to assess the growing needs here at the border.

“Actually, we are looking mostly about the medical needs of the people who are increasing. We are seeing that they are very, very tired from this very dangerous journey. Some people have survived shipwrecks, their psychological state is quite critical sometimes,” Markolefa points out. “We have people who have disabilities, we have babies and mothers who represent almost 40 percent of the people here. So our priority is to provide medical and psychological help and of course non-food items and tents and blankets, to protect them from the cold.”

With only a trickle of people allowed to cross the border over the last few days, tensions here have escalated. Recently, the Greek immigration minister said Greece risked becoming a “new Lebanon for Europe, a warehouse of souls.”

On Monday, refugees clashed with Macedonian border police who responded with tear gas and stun guns to repel a crowd of about 500 migrants. Prior to the flashpoint, Macedonian border officials had allowed about 50 refugees to cross in the morning, just 10 the night before.

Twenty-six-year-old Kurd Sami was caught in the violence and was shaken: “And I ask the world from here, if there is UN, if they hear my voice, there is no human rights in this area. We are asking the government in Europe to come and to take all the refugees to Europe. We  Iraqi people, Syrian people, we run away from the war.”

Now that Macedonia has so severely limited entry, some are now considering an alternate path through Albania and onto Italy. But migrants continuously arrive, and thousands languish in tents in the Greek countryside transformed by recent rains into fields of mud. Conditions continue to deteriorate into what many say is a recipe for more misery.