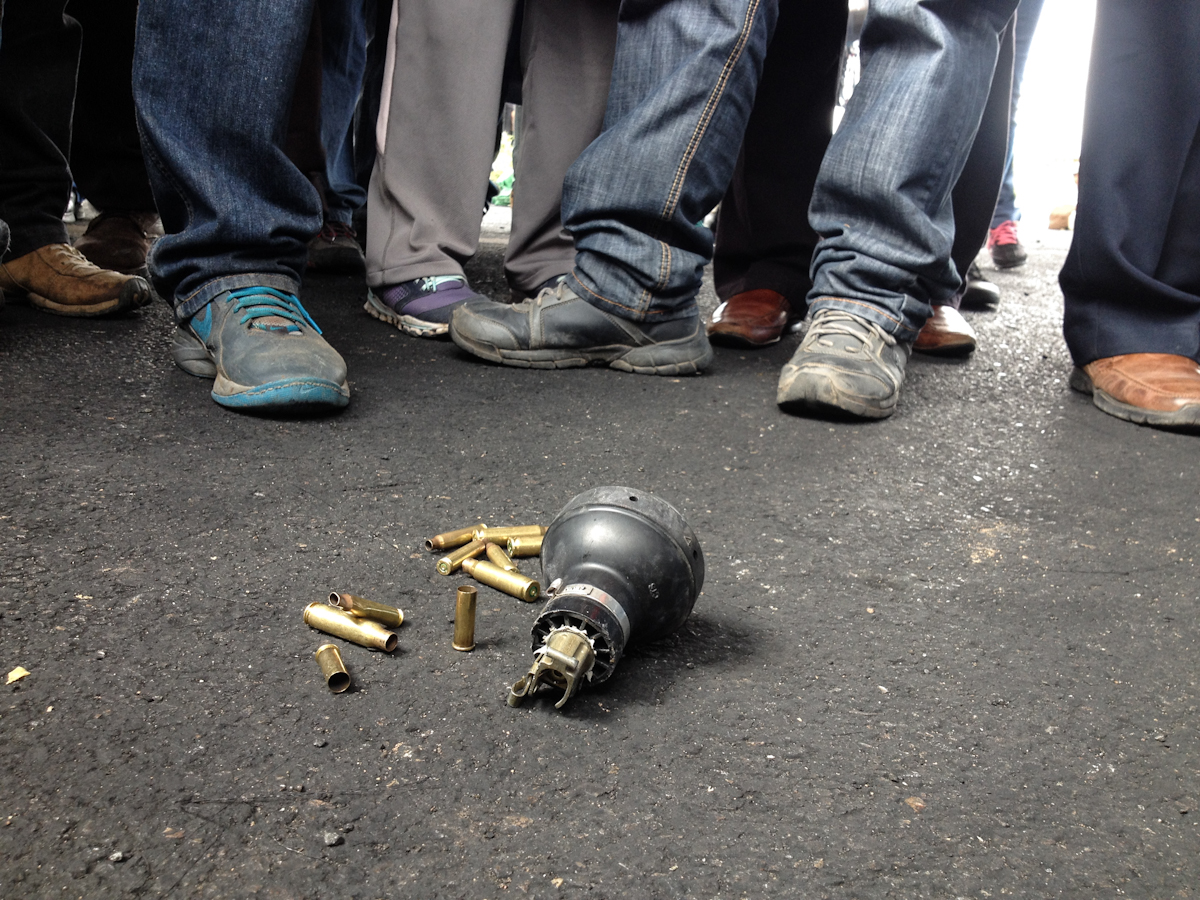 Teachers and parents gathered at barricade in Nochixtlan show evidence of police force and firearms used against them. (Photo credit: Andalusia Knoll)

A teachers’ union protest in southern Mexico has grown and intensified after federal police used deadly force to clear highway blockades in the state of Oaxaca last Sunday. At least nine people were killed – all of them civilians, all by gunfire – making the police action one of the deadliest directed against Mexican protesters in decades. Shannon Young reports from Oaxaca City.

When some 800 federal and state police moved in to clear a week-old partial blockade along a highway in the town of Nochixtlán, something went terribly wrong. Just what depends on who you believe.

Teachers and supporters at the blockade – as well as unaffiliated townspeople – say the police opened fire without warning.

Federal and state police initially denied bringing firearms – or even riot control batons – to the scene. When photographs and video emerged showing police not only armed, but aiming their guns in shoot-to-kill positions, the National Security Commission issued a written statement denying the authenticity of the images.

After journalists from national and international agencies claimed authorship and even shared metadata from the images, the official story changed again.

Mexico’s Federal Police chief Enrique Galindo told the media Monday that agents had come under fire when trying to disperse the protest and were forced to respond with their work-issued weapons.

All of the at least nine dead are civilians. State authorities say one person died as a result of mishandling bottle rocket fireworks. But multiple sources, including medical personnel, say the individual died of a gunshot wound.

Early breaking news reports suggested there was at least one police fatality and a state government press release indicated eight police were wounded by gunfire. The Associated Press later retracted its anonymously sourced claim of a police fatality and state officials have since been silent about police injuries.

“The only thing they’re seeking is to confuse sane judgment and public opinion in order to justify – or rather, to continue to justify – the deployment of armed forces in Oaxacan territory,” explains Torres.

If Sunday’s police operation was aimed to weaken and isolate the protesting teachers, it backfired in a major way.

Thousands of people quickly took to the streets in Oaxaca City Monday, condemning the violent crackdown.

By Wednesday, public sector healthcare workers were also supporting the teachers in their own nationwide protests. Healthcare workers are also opposing a recent set of reforms, saying public health is jeopardized, but, until now, had kept their protests separate from those of the teachers.

This week also brought the largest march in recent memory of indigenous Mixes through a string of rural towns in their ancestral territory.

At the state university, sympathetic students took over the college radio station Sunday. They’re still broadcasting a steady stream of phone calls coming in from across its large broadcast footprint and even from Oaxacans listening online in the United States.

Ruth Orozco is a cultural promoter and participated in an improvised street festival one day after the events in Nochixtlán.

“When the teachers union had its hand extended, asking for dialogue, the government responded with riot batons, tear gas and death,” says Orozco. “As a cultural guild, we should also organize ourselves in a way to confront this situation.”

Wednesday, the negotiations that teachers have been demanding since mid-May finally began and follow-up talks are set to resume Monday. But the blockades authorities intended to clear in the crackdown have only grown in size.