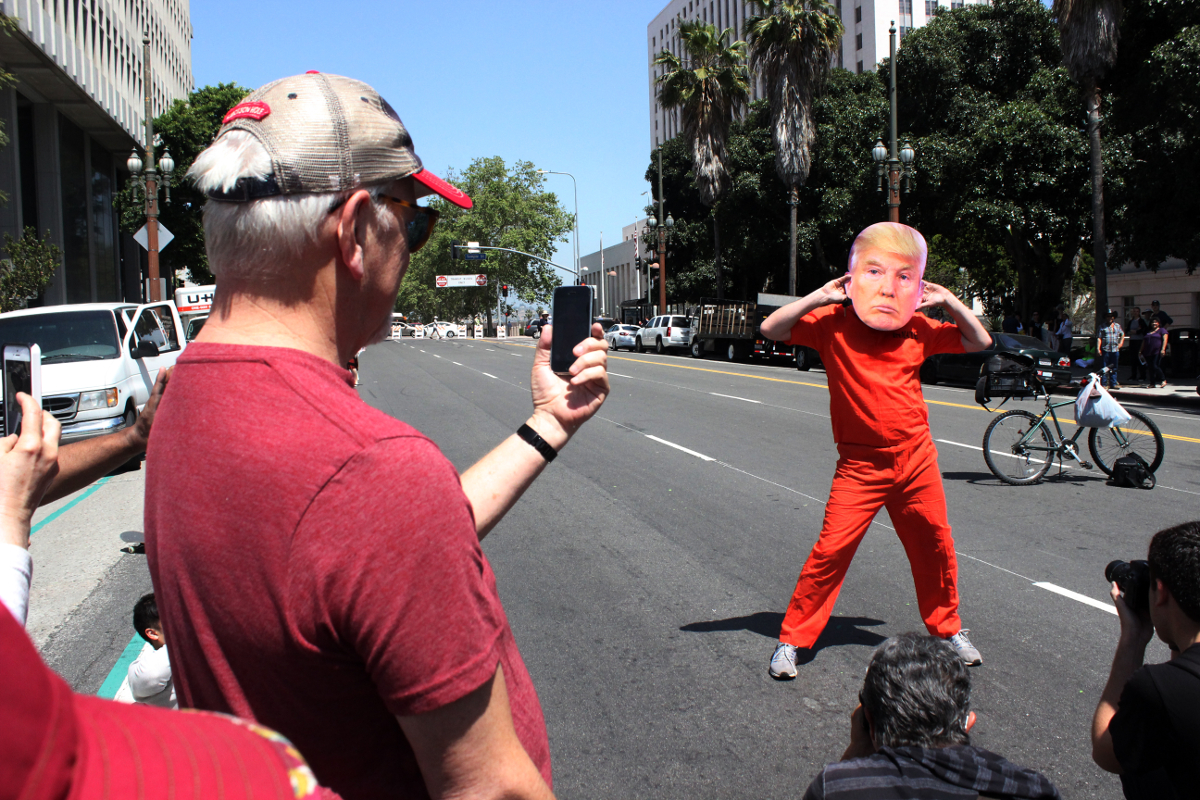 A demonstrator in a Trump mask and prison jumpsuit dances in the street at a Tax Day protest in Los Angeles. (Photo credit: Lena Nozizwe)

The deadline is looming for tax returns and this year’s tax day has renewed calls for President Donald Trump to make good on his campaign trail promise to release his returns to the public. Trump now says only the media is interested in seeing them, a claim he makes despite public opinion polls that show more than 60 percent of Americans want to see his tax report.

FSRN’s Lena Nozizwe reports that among them are undocumented immigrants who pay billions of dollars every year in taxes – money that may in part likely go to funding a deportation force to throw them out of the country.

A man dances in the street wearing a Donald Trump mask and a bright orange jumpsuit. A giant chicken whose face and hair are molded in the image of Trump sits on a flatbed truck. And a familiar chant from the Trump campaign trail echoes throughout the crowd, but turned on its head.

Of the attendees at this weekend’s Tax Day protest in Los Angeles, Iván Ceja is tame by comparison. He wears a black t-shirt that reads “I am undocumented.” And if you miss that message the white protest sign he carries says “I am undocumented and I pay taxes. Trump, show me your tax returns.”

“I believe our president does need to be transparent with his tax returns and this is a perfect opportunity,” Ceja says.

The Los Angeles demonstration was one of about 200 around the country, organized to push Donald Trump to release his tax returns – a transparency gesture made by every president since Richard Nixon.

Democratic Congressman Ted Lieu, who may better known for his anti-Trump tweets than his service on the House Foreign Affairs and Judiciary Committees, took more than 140 characters to take Trump on regarding his taxes LA’s Tax March.

Multiple signs in the crowd referenced Trump and Russia, including one that read, “Did Put forget to send you your W2?”, to an illustration of Putin wearing an “I Voted” sticker complete with a hammer and sickle.

Also in the crowd was Henry Doyle, who in a river of pink pussy hats, came wearing a red Make America Great Again cap and a T-shirt featuring Donald Trump standing on a Trump-branded tank and holding an automatic rifle as a bald eagle flies alongside him firing another rifle.

Doyle, who was also literally wrapped in an American flag, said he came to the protest to learn. That’s where he got into a discussion about immigration policy with Iván Ceja, the young man wearing his immigration status on his shirt.

“Because he’s undocumented, you want him out?” FSRN asks Doyle.

“He came here when he was nine months [old] with his family,” FSRN tells Doyle.

“And he’s undocumented, so that’s wrong,” Doyle replies. “You got to come here legally. My whole family did it.”

Moments later, Ceja explained directly to Doyle that he’s part of DACA, or the Deferred Action for Childhood Arrivals, which grants temporary status to certain immigrants brought to the U.S. as children – and that he pays taxes. Doyle and his friend Aaron Hernandez were not familiar with DACA.

Another DACA recipient recently posted her 2016 return on Facebook and encouraged Trump to do the same. The post prompted responses from online trolls calling her everything from a criminal to a liar for saying that she paid taxes.

A Tax Day protest and counter protest in Berkeley became heated on both sides, but the in-person exchanges at this Tax March were more civil than what often transpires online.

“No, not really, not anything I didn’t know, no. I appreciate that we can have a calm dialogue,” responded one.

Doyle says he looks forward to going to another march and learning more – even if it’s anti-Trump.

“They’re not as a radical as some of the ones I’ve had to deal with that support Trump before,” Ceja says of his interaction with Doyle and Hernandez.right

And Ceja believes his thousands of followers will learn something too from the exchange, because he broadcast much of the back and forth with the Trump supporters live, via Facebook.

So while the protest did not get Trump to reveal anything about his taxes, it was at least a peaceful forum for opposing views.