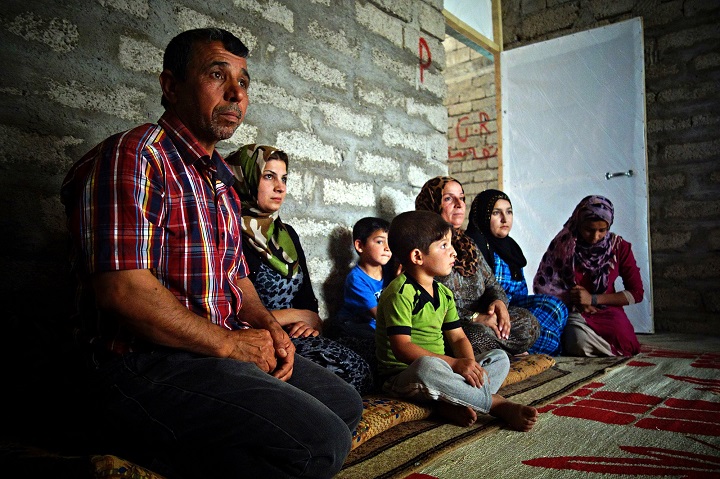 Alid, his wife and five kids hope to return home one day. But for now, they are internally displaced and live in basic rented accommodation. (Photo Credit: Filip Warwick)

Iraqi security forces are currently in the midst of a major offensive to retake the city of Fallujah from the self-described Islamic State. The action started May 22nd in areas surrounding Fallujah, but it was only yesterday that Iraqi forces reportedly entered the city itself. Lise Grande, the UN Humanitarian Coordinator for Iraq, says the world body’s relief agencies are scrambling to provide aid to those fleeing the area, but expressed concerns about tens of thousands of civilians trapped within the siege area.

Meanwhile, dozens of people died in Baghdad Thursday as two more attacks rocked the city. A car bomb in a crowded business district killed at least 19 people, and a suicide attack at a nearby military checkpoint killed a dozen more.

The newest wave of conflict in Iraq has displaced more than 3 million Iraqis from their homes. The country is also hosting hundreds of thousands of Syrian refugees. More than one million vulnerable people still reside in Iraqi areas controlled by ISIS. While Iraq has permitted more operational freedom than Syria has to aid agencies and NGOs, the crisis in Iraq has not garnered the same level of international attention. Filip Warwick reports from Erbil.

“Sometimes I work as a casual laborer, for a day or two, it depends on how much work I can get, and then I try to fill the gap, other than that, it’s very difficult to continue,” says Khalid Jibrail Alid.

He hails from Bartella, a town 13 miles east of Mosul. The 49-year-old construction worker built his dream house there for about $44,000. But he only lived in it for eight months before ISIS captured the town.

Alid, his wife and five kids hope to return home one day. But for now, they are internally displaced and live hand to mouth in rented accommodation approximately 40 miles north of the Kurdish city of Erbil.

The United Nations’ World Food Program (WFP) estimates about 3.2 million people are internally displaced in Iraq, and another 250,000 Syrian refugees have crossed the border into the country to escape fighting from various armed groups, including the Islamic State (IS).

Each month, Alid and his family get about $10 each in cash assistance from an EU-funded WFP program. He says the money is enough for about 10 days.

The large numbers of IDPs and refugees in the Kurdish region of Northern Iraq come from a range of different ethnic and religious backgrounds and include Sunni Muslims, Christians and Yazidis.

Falah Mustafa Bakir, Minister of Foreign Relations in the Kurdistan Regional government, says the Kurds are aware of the external forces behind the current crisis.

“We are trying to manage this crisis that we are facing and our people do not see the source in the refugees and IDPs,” Bakir explains. “They see them as victims, because they didn’t create these problems. It’s ISIS, it’s the wrong policies of former prime minister Maliki, it’s other things.”

The massive influx of people has upset the status quo here, and low oil prices, as well as a dispute with the central government over oil revenue payment’s have put the squeeze on the semi-autonomous region’s economy.

Baghdad’s tendency to divvy up government ministries along ethnic or sectarian lines has further complicated the development of a coordinated response plan.

“One of the big issues about working in Baghdad is that nobody talks to anyone else. If you come up here to the Kurds, they’re all united, all the ministries are united, they [are] all speaking with one voice and they all work together. The same thing in Baghdad, nobody turns up,” WFP Iraq country director Jane Pearce says. “The government plan for the IDP response in January was empty of ministerial inputs, because in Baghdad they don’t talk, they’re changing all the time. Please remember there has been no government for a long time.”

Food production has also dropped dramatically in the region, due to fighting and armed occupation in areas of Northern Iraq. WFP Vulnerability Analysis and Mapping (VAM) officer, Riccardo Suppo, looks at the availability of food in the country.

“The ISIS wave into these area happened exactly at the moment that the farmers delivered their production to the silos and they were supposed to receive the payment but they never received the payment,” recalls Suppo. “Not only their production but even their capacity to go back and produce again, to invest again and produce, and now that they are going back there’s no capacity to the investment, to restart their activity.”

Taha Abhdula Ibrahim is an Iraqi IDP who fled Mosul when ISIS took control of the city. He used to own a coffee shop and business was good. Now the Muslim husband and father of four says he sees a religious divide in who receives assistance.

Ibrahim adds that getting his kids to school is also a challenge.

But Britton Buckner, who comes from Alabama and is the head of programming at the U.S. based Catholic Relief Services, says the NGO assists on the basis of need regardless of race, religion or ethnicity.

“You know a lot of my colleagues tell me, they kind of look at the world and say, ‘What’s happened? When I was growing up in Iraq it didn’t matter if you were Yazidi or Christian, we were engineers, we were teachers, we were doctors.’” says Buckner. “And I think everyone is kind of hoping and waiting that we return to that situation.”

But with the host Kurdish communities, Iraqi IDPs and Syrian refugees all in the same job market, no sign of the Baghdad government stepping in to help, and the world average stay in a refugee camp at about 17 years, there’s little sign of the current conditions in Kurdistan abating anytime soon.