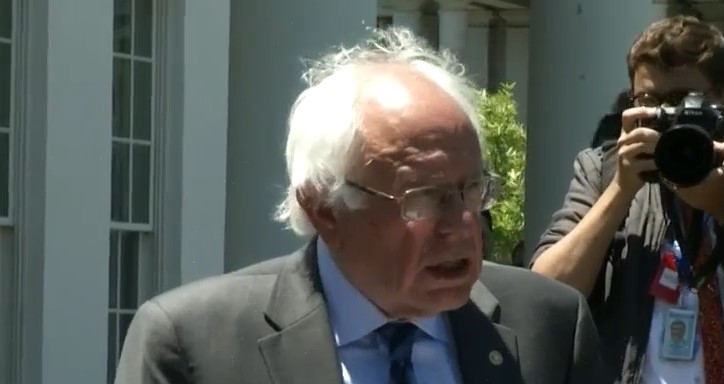 Presidential contender and Vermont Senator Bernie Sanders met with President Obama at the White House today, causing widespread speculation that he would announce the end of his campaign. Not so. Yet shortly after the meeting – the Clinton campaign released a video containing President Obama’s public endorsement his former Secretary of State. FSRN’s Nell Abram has more.

“I will, of course, be competing in the D.C. primary which will be held next Tuesday,” said Senator Bernie Sanders, as he emerged from the White House and briefly addressed the media after meeting privately with President Barack Obama. The Vermont Senator called for the meeting after Tuesday’s six-state primaries in which Sanders won Montana and North Dakota, while Hillary Clinton took South Dakota, New Jersey, New Mexico and California.

Senator Sanders continued to hammer the themes of his candidacy, not letting up an inch on income inequality and what he called “the drift toward an oligarchic form of society” in the country.

Sanders did say that he looked forward to meeting with Hillary Clinton in the near future, striking a cooperative tone in defeating the presumptive Republican nominee – Donald Trump, who Sanders said would be a “disaster” as president.

He also thanked President Barack Obama and Vice President Joe Biden for not “tipping the scales” by remaining publicly impartial during the primary season.

But within a matter of hours, the Clinton campaign released pre-recorded video message from Obama, endorsing the former Secretary of State.

“For more than a year now, across thousands of miles and all 50 states, tens of millions of Americans have made their voices heard,” Obama says in the video. “Today, I just want to add mine. I want to congratulate Hillary Clinton on making history as the presumptive Democratic nominee for president of the United States.”

In the message recorded Tuesday, the president made it clear that he’s ready to hit the campaign trail. And he hit conciliatory notes aimed at drawing in Sanders’ supporters – many of whom are still set to rally for the Vermont Senator tonight in D.C. at RFK stadium.