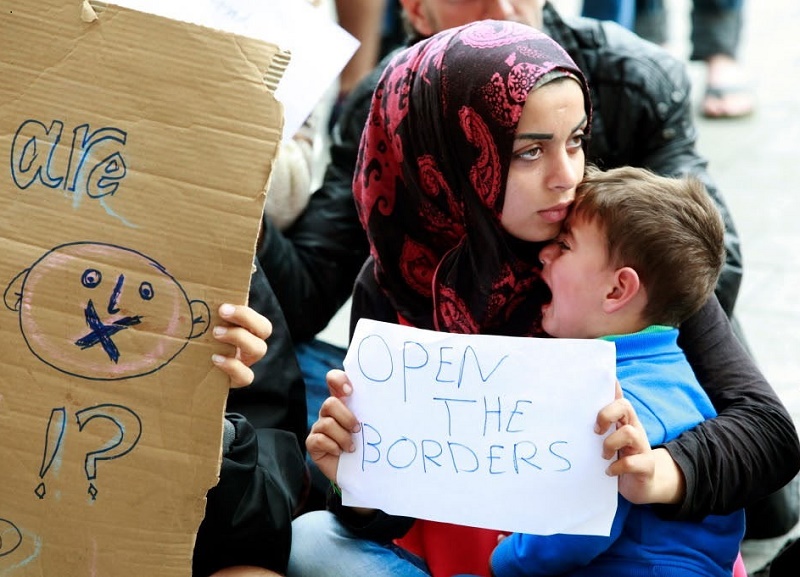 The humanitarian crisis unfolding across Europe deepens as record numbers of refugees continue to arrive by land and sea, fleeing violence and poverty in the war-torn Middle East, North Africa and humanitarian crises elsewhere. The depth of desperation is increasingly evident in images and videos revealing horrific scenes playing out from beaches in Turkey to train tracks in Hungary. European leaders are struggling to craft a unified response over the crisis that is threatening the 28-nation bloc’s open borders policy.
FSRN’s Jacob Resneck reports from Brussels.

Three- year-old Aylan Kurdi’s lifeless body washed ashore on a beach in Turkey Wednesday. Images of the toddler’s body in the surf circled the globe, underscoring the urgency of the mounting refugee crisis pouring out of the Middle East into Europe. The child drowned along with his five-year-old brother and their mother while trying to cross the Mediterranean to reach relative safety in Greece.

Thursday, video captured another scene of anguish in Hungary where desperate refugees have been trying to make their way through the country to Germany. Hungarian officials stopped trains jam-packed with refugees shortly after they departed a railway station in Budapest. One couple pleaded with police, and finally -– holding a baby in diapers — threw themselves on the tracks.

The images painfully reveal the plight of refugees as they migrate to southern and eastern Europe on their way to more prosperous countries like Germany, France and Sweden that offer the prospect of paid work and education opportunities.

Hungary complains of being overwhelmed by the crisis and is constructing a controversial fence along its southern border with Serbia in a vain effort to keep migrants from crossing on their way into the European Union. More than 140,000 migrants have entered from Serbia this year. Speaking in Brussels on Wednesday, Hungarian Prime Minister Viktor Orban leveled the blame on Germany for its de facto open-door policy towards war refugees which he blames for encouraging thousands to illegally transit his country and break European laws.

But it’s true that refugees don’t want to stay in eastern Europe which makes Hungary’s crackdown on transiting refugees all the more puzzling. Take for example Shaban, a Syrian refugee who had paid for a boat crossing from Turkey to Greece. Earlier this week he skirting the border fence and walked into Hungary. He told a waiting camera crew from the German state broadcaster Deutsche Welle that he seeks a new life in Germany for himself and his family.

“This is my chance,” explained Shaban. “In Syria, my house and my factory is destroyed. This is a war, just a war. I can’t talk anymore – it’s enough.”

Hungary’s attempt to prevent people from crossing has been roundly criticized by other European leaders. French Foreign Minister Laurent Fabius says each country in the 28-nation bloc has a commitment to accept war refugees seeking asylum.

“With regard to all those people who are politically chased out of their country and who are in war-torn countries, we have to be able to welcome them,” says Fabius. “It’s called the plea for asylum and every country has to respond to that. France, Germany and others have, but when I see certain European countries that do not accept these groups, I find that scandalous.”

Despite Hungarian police pulling refugees off of trains, many hundreds have begun reaching Germany. In the southern city of Rosenheim near the Austrian border, German officials say there is not enough space to feed and house the hundreds of people as they arrive.

Federal Police spokesman Rainer Scharf says German police have stopped checking trains and are, for the most part, allowing refugees to pass through the district on their way to larger cities in the country.

“We are reaching our limits here at the police station and I would go as far as saying that we are beyond our limit,” describes Scharf. “We are trying to do what is possible within our capabilities.”

Challenges remain in separating asylum cases from those who can be safely sent back to their countries of origin. And of course there are divergent ideas on how many refugees each country within the EU should accept. Germany projects receiving 800,000 migrants this year but warns such a figure is not sustainable in the long-term.

There are also fears of a racist backlash following clashes between police and far-right demonstrators opposed to refugee centers and a spate of attacks directed at refugee housing, mostly in poorer parts of eastern Germany.

German Chancellor Angela Merkel said there would be no accommodating far-right activists opposed to refugees: “What bothers me is that we are seeing this hatred, this atmosphere in our country and my response to it is emphatic: a clear line must be drawn — there can be no excuses. Of course we will put forward our arguments, but we cannot show a trace of sympathy.”

There has been a human toll to all of this. The International Organization for Migration said Tuesday that more than 350,000 migrants have risked their lives crossing the Mediterranean Sea this year. Of those at least 2,600 have died trying to make it to Europe. Most of those deaths are due to drownings in the Mediterranean, but those crossing by land also take risks.

That was illustrated last week with the gruesome discovery in Austria of 71 dead bodies – believed to be Syrian refugees – found in the back of an abandoned poultry truck parked by the side of the road. Police have arrested at least five suspected traffickers in that case.
And so as divisions between European countries about how to respond to the mounting crisis remain, European interior ministers are set to meet later this month in an emergency meeting. But so far, there remains little accord on appropriate and humane measures to address what many describe as Europe’s largest refugee crisis since World War II.