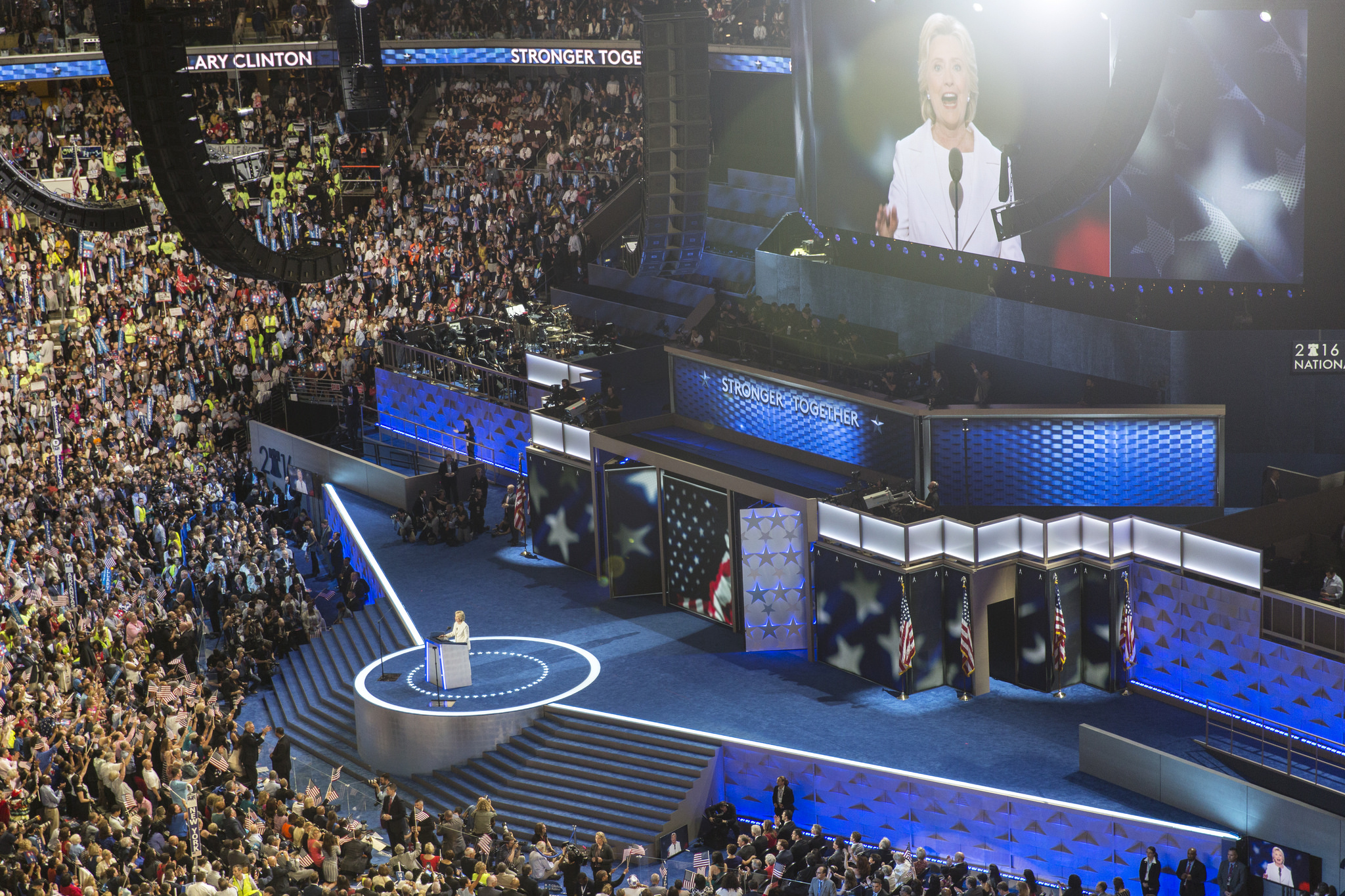 Hillary Clinton accepts the Democratic Party's nomination for US president at the convention July 28, 2016 in Philadelphia. (Photo credit: Lorie Shaull via Flickr)

The Democratic Party went to great lengths to project an image of patriotism and inclusiveness at its nomination convention. Also making history, Sarah McBride, a spokeswoman for the pro-LGBTQ rights group the Human Rights Campaign became the first transgender speaker to address a major party’s convention.

“LGTB-Q people are still targeted by hate that lives both in laws and in hearts,” she said in her speech. “Many still struggle just to get by. But I believe that tomorrow can be different, tomorrow we can be respected and protected, especially if Hillary Clinton is our president. And that’s why I am proud to say that ‘I’m With Her!’ Thank you very much!”

That set the tone for the evening which also included a Pakistani-American whose 28-year-old son had enlisted in the U.S. Army and was killed in Iraq in 2004. Khizr Khan challenged Republican nominee Donald Trump directly saying Trump’s anti-immigrant and anti-Muslim rhetoric would bar people like his late son from the United States.

“He vows to build walls and ban us from this country,” Khan said as the crowd jeered the Republican nominee.

In her acceptance speech, Hillary Clinton also expressed appreciation for Sen. Bernie Sanders, whose campaign energized tens of thousands of new voters in the primary and whose support she’ll need in the general election.

“Bernie, your campaign inspired millions of Americans, particularly the young people who threw their hearts and souls into our primary,” Clinton said, speaking of her former political rival. “You’ve put economic and social justice issues front and center, where they belong. And to all of your supporters here and around the country: I want you to know, I’ve heard you. Your cause is our cause.”

But whether the Democratic Party has been truly united remains an open question. That was the impression of ThinkProgress political reporter Alice Ollstein who covered both conventions from the floor.

But Ollstein cautions that doesn’t mean all is rosy for the Democrats. There remains a wide gulf between expectations among the liberal wing of the party energized by Bernie Sanders and the Democratic leadership which is tacking to the right to court disaffected Republicans.

“We see a party that is trying to have such a big tent and include so many different groups that it’s stretching to the breaking point,” she said, “and they’re trying to be everything to everyone and that’s causing some tension and some anger and people are saying look you can’t be the party of Elizabeth Warren railing against the big banks and be the party of Michael Bloomberg and yet we saw both of those people on the stage this week.”

The question remains whether Hillary Clinton can truly bring progressive Democrats and left-leaning independent voters with her. That’s something she’s so far had a hard time to reconcile and will be a major challenge if she wants to ensure a healthy turnout in November.

“I think we’re going to see this tension and anger going forward and I think that certain groups including some of the former Bernie Sanders supporters are wondering if the party is for them and if the party is a place where they feel they can identify,” Ollstein said.

Now that the conventions are over the nation’s attention can turn to the matchup between Clinton and running mate, Sen. Tim Kaine of Virginia on one side and Trump and Indiana Gov. Mike Pence. But the first one-on-one televised debate isn’t scheduled until September 26.