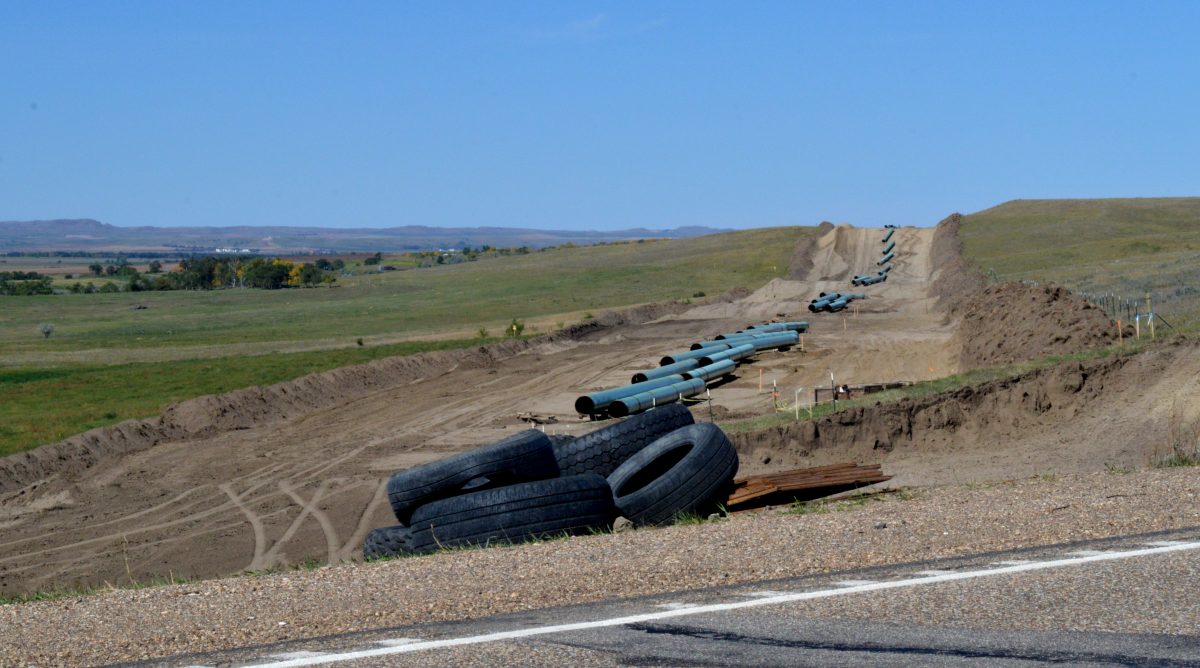 If it’s finished, the Dakota Access pipeline will run roughly 1,100 miles across farmlands, forests and rivers in four states to a terminus in southern Illinois. (Photo credit: Chris Geovanis)

Drilling under a reservoir of the Missouri River to complete the contested Dakota Access Pipeline could begin by tomorrow, after Army officials gave notice of intent to grant an easement for the remaining stretch of pipeline construction – and waived a standard 14-day waiting period. FSRN’s Shannon Young has more.

The Army Corps of Engineers has reversed course on its stance towards the Dakota Access Pipeline, and now says it is granting Energy Transfer Partners access to the land it needs to horizontally drill under Lake Oahe, upstream from the Standing Rock Sioux reservation.

The crossing is the final stretch of construction for the pipeline that has galvanized the country’s largest indigenous-led mobilization in generations. Standing Rock Sioux leaders say the project endangers their sole supply of drinking water and runs roughshod over tribal sovereignty rights.

Lakota attorney Chase Iron Eyes spoke with author Naomi Klein as news broke of the intent to grant the easement.

“What this means legally is that drilling can start as soon as practicable because President Trump included in his memo the notion that the 14-day waiting period which is customary for the Army Corps of Engineers when it sends notice of approval, that waiting period has been waived,” Iron Eyes explained. “So drilling could effectively begin within 24, 48, 72 [hours] or a week, we just don’t know how long.”

In a statement, the Standing Rock Sioux leadership says the tribe will mount a legal challenge on the basis that the Environmental Impact Statement was wrongfully terminated.

The pipeline project became a major issue in nation-to-nation relations between the U.S. government and the Lakota in the final months of the Barack Obama administration. When Obama left office, the Army Corp had denied the easement, committed to conducting an Environmental Impact Statement and considering alternate routes.

As one of his first acts of government, Donald Trump gave the green light to both the Dakota Access and Keystone XL pipelines in a presidential memo.

Financial disclosure documents from the 2016 presidential campaign show that as recently as last May, Trump held investments in the companies behind the Dakota and Keystone XL pipelines. Whether he remains invested is unknown, as the president has refused to release more recent disclosure documents and has resisted calls to divest from potential conflicts of interest.

When prospects for federal intervention in favor of the tribe faded last fall, pipeline opponents expanded their tactics to call for divestment from the project’s financial backers.

The tactic paid off Tuesday evening when the Seattle City Council voted unanimously to pull $3 billion dollars out of Wells Fargo due to the bank’s role in financing the pipeline project.

Energy Transfer Partners, the company behind Dakota Access is also developing two other projects that are meeting local opposition; the Bayou Bridge pipeline to cut across watersheds in southern Louisiana and the Trans-Pecos pipeline set to cross under the Rio Grande into Mexico near the Big Bend National Park in West Texas.

A report released this week based on accident data from the federal government’s National Response Center shows that in a two-year span, at least 69 spills have occurred from pipelines operated by ETP and its subsidiaries, including accidents resulting in drinking water contamination.