Pentagon opens probe of U.S.-led airstrikes in Syria that killed at least 74 civilians 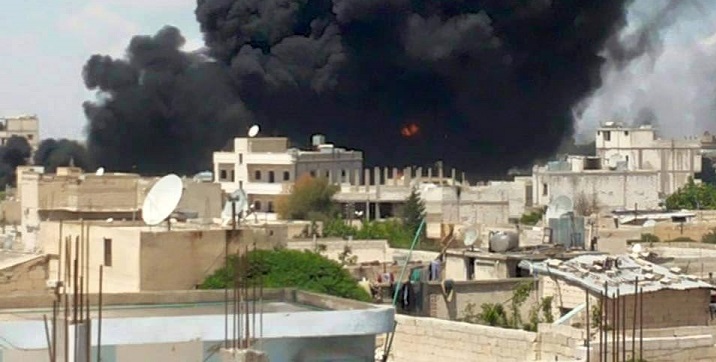 The Pentagon says it’s investigating what could be its deadliest strike on civilians in Syria since its anti-ISIS campaign began two years ago. Syrian opposition groups and monitors said a strike on July 19 likely killed more than 100 people including entire families near the city of Manbij in Syria’s Aleppo province. FSRN’s Nell Abram reports

“That credibility assessment is complete and the result was that the information available was credible enough to warrant formal investigation which we have initiated,” Garver said.

The Syrian Observatory for Human Rights reported heavy civilian casualties during several days of airstrikes last week around the village of Tokhar near the city of Manbij on several days last week. The Pentagon says so far it’s only probing strikes from a single day.

The city of Manbij is currently besieged by Kurdish and Arab opposition fighters trying to dislodge militants loyal to the self-styled Islamic State.

Chris Woods is an investigative journalist who leads Airwars, a group of researchers and reporters based in the middle east and Europe who focus on civilian casualties from international airstrikes in Iraq and Syria.

Woods says the group has cataloged the names of 74 civilians – including children – killed last week, identifying them through five separate sources as local residents. But how many more may have died in the U.S. and allied airstrikes remains unclear.

“Where it get a bit more confusing is how many others may have died in the event, who may have been internally displaced people that had been pushed out or may have left Manbij where the siege is going on at the moment. So unnamed civilians is one suggestion, may have also been included dead and some counts are placing those numbers in the 120s, 130s,” Woods explains, “It certainly looks to us from the reporting we’ve seen that this is the single greatest loss of civilian life in any coalition action in two years of war unfortunately.”

Woods is encouraged that the Pentagon has quickly acknowledged the reports of the deaths, but says it’s often six-months before a military probe is completed.

“Around Manbij right now we have a big problem. It’s not just the Tokhar event of last week, but we’ve actually logged more than 40 alleged civilian casualty events over the last couple of months, just in the small area, reportedly from the very intense coalition campaign to liberate that town from so-called Islamic State. We think there’s a big problem around Manbij, a lot of civilians reportedly being killed and we think any lessons to be learned from Tokhar need to be applied tactically right now. We can’t really wait six-months for CENTCOM to let us know what went wrong here.”

Immediately after the deadly strikes on civilians the opposition Syrian Coalition called for a moratorium on U.S.-led strikes in the region.  But in a statement released Wednesday, the U.S.-led anti-ISIS coalition claimed 360 ISIS targets in Syria and Iraq had been destroyed by both manned aircraft and drones between July 19 and 25 alone.