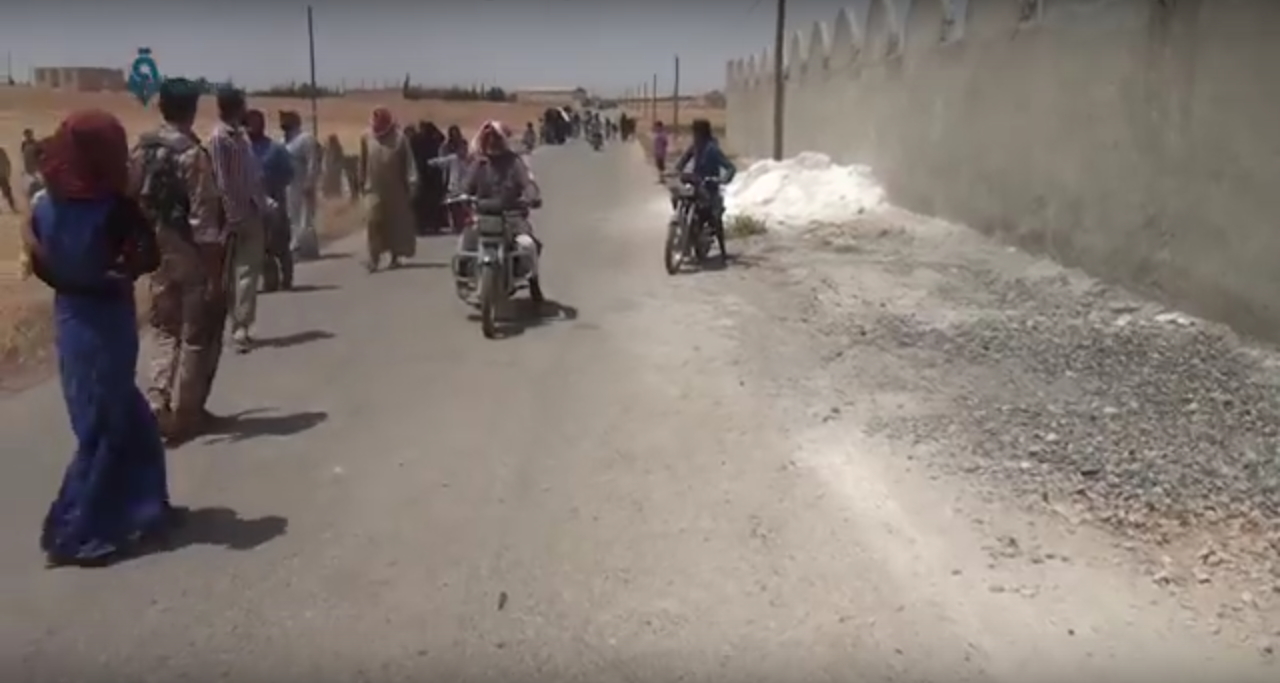 Manbij residents on the move, 20 June 2016, away from the battle zone in and around Manbij. (Photo credit: Qasion News Agency EN via Wikimedia / Creative Commons)

During the past two days, U.S.-led airstrikes targeting ISIS in Syria have reportedly killed more than 100 civilians trapped in and around the besieged city of Manbij. FSRN’s Nell Abram has more.

Entire families, including children, were reportedly killed by U.S. warplanes and armed drones as they fled fighting in the Manbij area of Aleppo province. The region, near the country’s northern border with Turkey, has been under the control of the self-styled Islamic State since 2014.

In one video uploaded to social media, a man wails as he pulls the lifeless bodies of small children from a pile of the dead.

It’s still unclear exactly how many civilians were killed this week by U.S.-led airstrikes. Reports from the ground also claim that a school serving as shelter for displaced civilians was also struck, and an unknown number of victims remain buried in the rubble.

Nagham Ghadri is with the Turkey-based Syrian Opposition Coalition. The group says the airstrikes violate the Geneva Conventions on the Protection of Civilians.  Ghadri called for an end to attacks on residential areas.

“The whole world should know that those civilians are victims when ISIS invaded their village and now they’re victims when the coalition airstrike killed their families,” Ghadri says by phone from Istanbul. “Most of the victims were children and women, old people. We ask the coalition to stop the these kinds of airstrikes. People are really shocked, until now they don’t know why they’ve been targeted like that.”

More than 70,000 people are thought to be trapped in the city of Manbij with had a pre-war population of about 100,000. There’s no electricity and little access to medicine.

The Syrian Coalition says it has lodged complaints with U.S. commanders and the United Nations over the strikes on Monday and Tuesday. And human rights group Amnesty International is calling for an independent investigation into the deaths.

The U.S.-led air campaign against ISIS opened an offensive to repel the militant group from Manbij area in May. The Syrian Observatory for Human rights says at least another 100 civilians have been killed since the campaign began.

A statement from U.S. Central Command confirms 21 airstrikes on Monday alone, including drone-fire – most near Manbij.

After a Wednesday meeting with defense ministers from nations engaged in the anti-ISIS military action in Iraq and Syria, U.S. Defense Secretary Ashton Carter said he was aware of reports about civilians killed in Manbij.

“We will investigate these reports and continue to do all we can to protect civilians from harm,” Carter told reporters. “Being scrupulously careful to avoid civilian casualties and being transparent about this issue is a reflection of the civilized nature of this coalition.”

U.S. officials also claim that Sunday, Syrian opposition fighters retook a hospital in Manbij that ISIS was using as a command and control center.

The western-backed Syrian Coalition regularly condemns civilian deaths by Russian and Syrian airstrikes. But allegations of non-combatants killed by U.S. and allied warplanes in the region are rare.