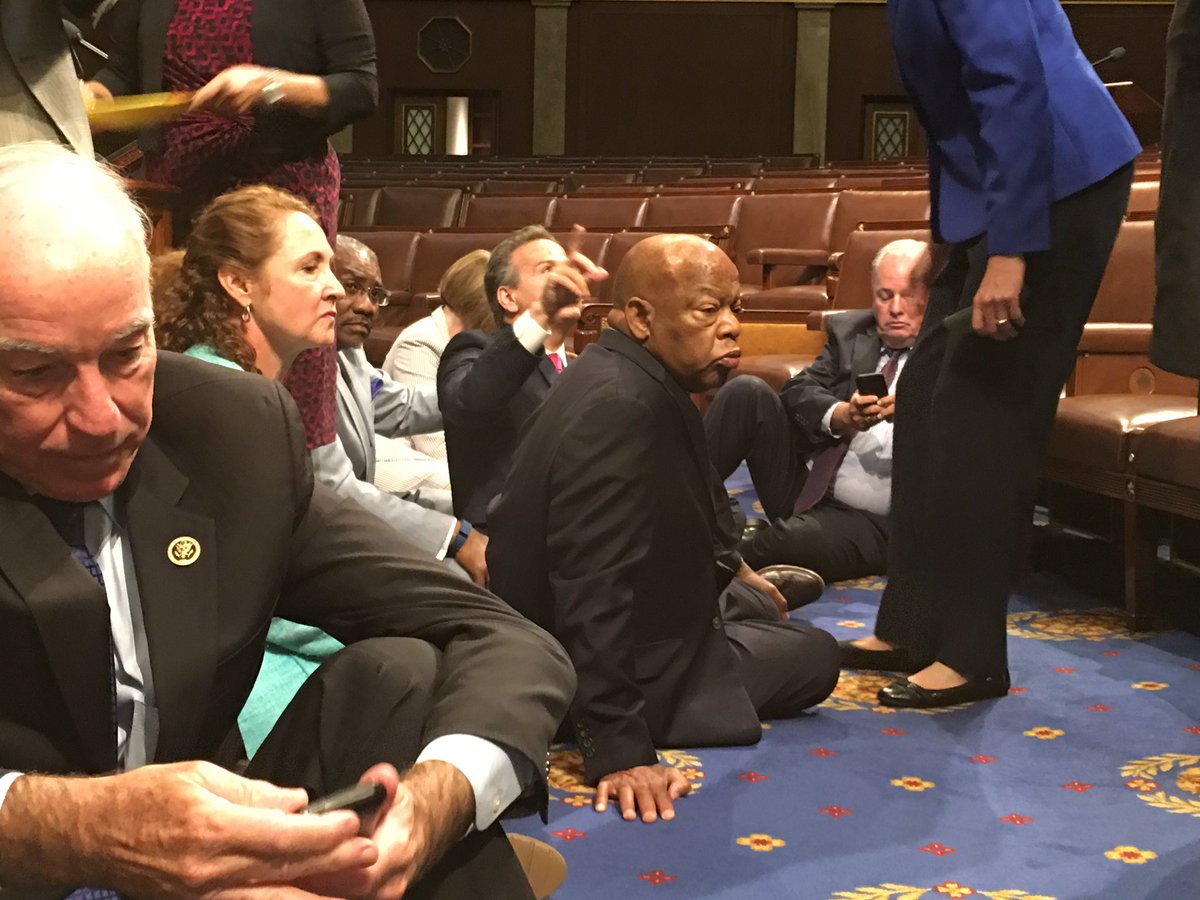 Photo of the sit-in on the House floor tweeted by Rep. John Yarmuth (via @repjohnyarmuth).

“Rise up Democrats. Rise up Americans. This cannot stand. We will occupy this floor. We will no longer be denied a right to vote. I yield to our majority Whip and leader. We sit down.”

With that, House Democratic Whip, Maryland Representative Steny Hoyer, officially started the sit-in, and immediately acting Speaker pro-tem Daniel Webster closed the session. Dozens of Democrats sat down at the front of the House chamber, saying they would stay there until House Republicans allow a vote on legislation to address gun violence.

The protest began after he delivered an impassioned speech: “We cannot continue to stick our heads in the sand and ignore the reality of mass gun violence in our nation. Deadly mass shootings are becoming more and more frequent. Mr. Speaker, this is a fight – it is not an opinion. We must remove the blinders. The time for silence and patience is long gone!” Lewis exclaimed. “We’re calling on the leadership of the House to bring common sense gun control legislation to the House floor. Give us a vote! Let us vote! We came here to do our job, we came here to work!”

C-SPAN cameras – which are toggled off and on when Congress goes in and out of session – stopped broadcasting as soon as Representative Webster closed the morning hour. They started again when House reconvened to resume its work at noon.

Protesting lawmakers were still gathered in the front of the chamber, chanting, “No bill, No break.” They quieted for the official prayer and Pledge of Allegiance, but as soon as the Speaker pro-tem tried to kick off business as usual, chanting resumed.

Once again, the Speaker recessed the House and C-SPAN cameras went dark. But California Congressman Scott Peters was on the floor and streaming live video on Periscope, which C-SPAN then rebroadcast.

The call to action in the House follows a 15-hour filibuster last week in the U.S. Senate. That action ended with GOP leadership in the Senate agreeing to schedule votes on gun control legislation. Those votes, held Monday, all failed. Senate leader Mitch McConnell has agreed to bring a compromise bill – The Terrorist Firearms Prevention Act of 2016 – to the floor for a vote as early as this week.