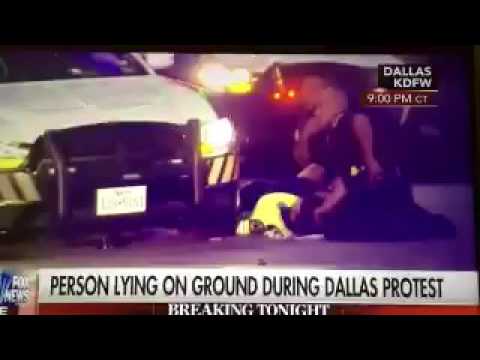 (Screenshot via KDFW-TV in Dallas, Texas)

Three suspects are in custody. According to Police Chief David Brown, after hours of unsuccessful negotiations and an exchange of gunfire, police deployed a remote-controlled robot carrying a bomb which when detonated killed the fourth suspect.

Dallas Mayor Mike Rawlings  said about 800 people attended the peaceful demonstration and were winding up the march when gunfire erupted from a nearby parking garage.

Chief Brown claimed that before police killed him, the shooter told negotiators he “was upset about” the Black Lives Matter movement, and wanted to kill white people, especially “especially white officers,”  but this remains unconfirmed.

President Barack Obama said the country is “horrified” by the shootings in Dallas.

“We also know that when people are armed with powerful weapons, unfortunately it makes attacks like these more deadly and more tragic and in the days ahead we’re going to consider those realities as well,” Obama said from Warsaw, Poland where he is attending a NATO summit. “In the meantime, today, our focus is on the victims and their families.”

Earlier Thursday, the president also condemned the Louisiana and Minnesota killings by police.

The Congressional Black Caucus on Capitol Hill says the Dallas shootings are yet another reason to move forward with gun safety measures that remain stalled in the House of Representatives.

“The Republicans in Congress are refusing to address gun violence in America that targets black men and black women, and Hispanic men and Hispanic women and yes even police officers,” Chairman of the Black Caucus Rep. G.K. Butterfield (D-N.C.) said. “The Congressional Black Caucus is frustrated. You want to say we’re mad? We’re mad. We’re determined to take our advocacy now to a higher level.”

Butterfield also said this week’s fatal police shootings of Philando Castile in Minnesota and Alton Sterling in Louisiana must be addressed by Congress and law enforcement or else the cycle of violence would continue.