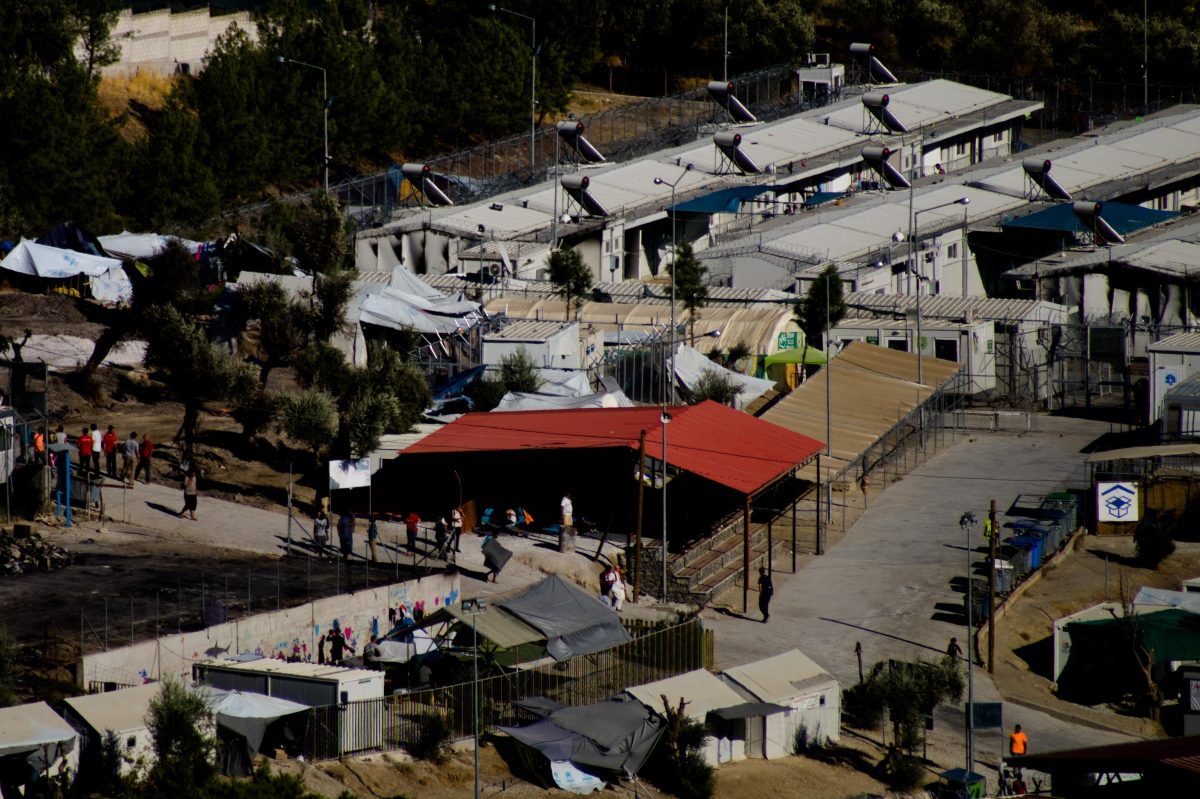 The Moria refugee camp on the Greek island of Lesbos. The edge of the burned portion of the detention center is visible at the bottom left. (Photo credit: Marianna Karakoulaki)

Thousands of asylum seekers are without even basic shelter in Greece after a fire swept through a large refugee camp in Monday night. By midday Tuesday much of the Moria camp on the island of Lesbos was destroyed. FSRN’s Nell Abram has more.

Nell Abram: Before Monday’s fire, the overcrowded camp housed more than 5,000 people fleeing war and dire poverty in their homelands and seeking refuge in the EU. Freelance journalist Marianna Karakoulaki joins us by phone from Lesbos. Thanks for joining us.

First, bring us up to date. The fire is reportedly now out, but what were the conditions in the camp and what was the climate ahead of yesterday’s unrest?

Marianna Karakoulaki: Actually, I cannot describe inside the camp, because journalists are not allowed inside. We’re being restricted access by the minister and police that are protecting the camp. It is a detention center; it is basically a prison right now. The conditions are pretty much horrible from what I’ve…I’ve spoken to several refugees who are inside and they told me that there was a hunger strike. At some point this hunger strike stopped, and this initiated an unrest among the refugees. So they were throwing stones and there were several people that were injured – serious injuries – some people with injuries on their head, for example this morning. And at some point, the police the police threw tear gas.

NA: How extensive was the damage?

MK: Sixty percent of the camp has been burned down, according to several reports from the authorities. This morning, it was pretty much clear, there were some isoboxes that they used as houses. You could see that they were seriously damaged. And there were several tents that were damaged and burned. All of these people are without tents and they have nowhere to sleep basically.

NA: Are there other camps or shelters on Lesbos that can house those people displaced by the fire?

MK: Not really. Generally, Lesbos and the islands have a problem with the capacity of the refugees they can house. Lesbos, for example, right now, according to the numbers released today, has more than 5,000 people who are on the island, and the capacity of the island is 3,000. It is plenty overcrowded and, from what happened yesterday, I assume that a lot of people are going to stay outside, either in the streets of Mytilini or the forests around Moria. Even the refugees do not know where they’re going to sleep. I met several that had no idea where they were going to sleep because they pretty much lost everything that they had.

NA: What about unaccompanied minors?

MK: Unaccompanied minors were taken to the PIKPA center, which opened. It’s a voluntarily run housing space for children, mainly in vulnerable cases. What little whom I have spoken to, they have told me they’re actually worried about women and children, because the situation yesterday was very dangerous for women and children who were unprotected. The police did not intervene, they didn’t protect anyone from what the refugees told me. And there was no medical help inside the camp for several hours.

NA: The International Organization for Migration says that more than 165,000 people have arrived in Greece already this year. While that number is down compared to the year before, there are still substantial numbers of refugees arriving on Greek shores. Marianna Karakoulaki, is the EU-Turkey deal aimed to stop migrants in Turkey having any real effect on the influx on Lesbos?

MK: The thing with the EU-Turkey deal is that it was set on the 20th of March in order to stop the refugee flow, to stop the thousands of people who were crossing the Aegean. This actually worked, because everyone that came to the island, which were initially hotspots…the island became a detention center, so the flow was stopped.

NATO was in the Aegean, Frontex was in the Aegean, the Turkish military and the Coast Guard were actually, in a way, protecting the Aegean from the refugees and they were stopping them from crossing in Turkey. The thing with that is that after the coup in Turkey, we have noticed that the numbers are actually rising. It’s not thousands of people that are crossing, but they are higher than they were in the beginning of March or in April, for example.

NA: And those people in Moria, where are they along the migration pathway? Are they awaiting deportation back to Turkey or processing for resettlement in the EU?

MK: In theory, they are being interviewed by the EU asylum service and the asylum services in Greece. If they are from Syria, they are eligible for reunification if they have family in Europe or for relocation. This will take a lot of time, but at the moment, they will be able, in theory, to fly from the islands into Europe. There are several applications that are not processed or they’re being rejected by the asylum services, and this includes Syrians, and they are being taken back to Turkey. Turkey is considered the safe country for these nationalities.

NA: Finally, world leaders at the United Nations this week approved what they call the New York Declaration on Migrants and Refugees. UN Secretary General Ban Ki Moon called it a “breakthrough,” but human rights advocates criticize its lack of commitments and legal teeth. Do you think anything will emerge from this summit that will have an actual effect on the ongoing crisis?

MK: Personally, no, I would not see anything positive emerging because…it’s good when they speak and give emphasis to the whole issue, but if they’ll not provide safe passage to the refugees who’ve tried to cross and they do not actually have a viable plan, nothing is going to change. There will be some really interesting and really great statements, I’m sure about that, but in reality nothing is going to change unless they finally decide to see the refugee crisis as a humanitarian crisis, not as a security crisis.

Marianna Karakoulaki is a freelance journalist. She joined FSRN by phone from the Greek island of Lesbos.