The Nagasaki cloud, as seen from one of the B-29 Superfortresses used in the attack. [Photo Credit: Charles Levy via Wikimedia Commons Public domain)

Wednesday marks 71 years since the U.S. dropped atomic bombs on Hiroshima and Nagasaki. By the end of 1945 widely accepted estimates say about 214,000 people – mostly civilians – had died; an unknown number perished from longer-term effects in the years to follow. FSRN’s Linda Perry Barr attended a recent event in New York marking the anniversary. 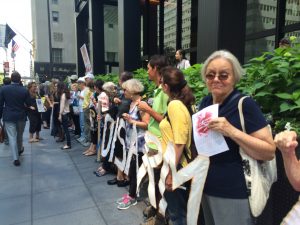 Protesters on Park Avenue in NYC in front of the Japanese Consulate on the 71st Anniversary of the bombing of Hiroshima on August 6, 1945. (Photo credit: Linda Perry Barr)

Peace activists gathered in front of the Japanese Consulate on New York City’s Park Avenue. They delivered a letter of apology to the Japanese people.

“Every year this time of the year, my mind is getting so heavy. I cannot breathe, you know,” Miyako Taguchi, who has lived in the U.S. for two decades, told FSRN. “I feel like the heat of Nagasaki, because I grow up there and I know how hot it was, and then it’s very humid and hot, plus the atom bomb was dropped the heat was there too, so it’s like you’re living inside of the fire.”

Taguchi says there’s an urgency to complete an international agreement on nuclear nonproliferation and disarmament. She fears that once all the remaining survivors are gone, there will be less pressure to get rid of the weapons and history will repeat itself. Taguchi says on the anniversary she feels the pain of her homeland.

“And so, I have an image in my head I can’t get rid of,” Taguchi said. “The people, like my mother and father, experienced it. It’s not like you want to remember the memories.”

There are currently 16,000 nuclear weapons globally, nearly all held by the U.S. and Russia – though at least six other countries are known or believed to be atomically armed.

At a commemoration ceremony this week in Nagasaki, the city’s mayor called for Japanese lawmakers to codify non-nuclear policies in the country.

However, Republican presidential hopeful Donald Trump, thinks Japan should arm itself with atomic weapons. In fact, he has said that the world needs more – not fewer – nuclear weapons. And speaking to MSNBC, the GOP presidential candidate said he would push the nuclear button in the war against the self-proclaimed Islamic State.

“One hundred and twenty-seven countries are working to get a treaty to say nuclear weapons are prohibited, they are illegal. They are banned. We’ve never done that,” Slater said. “We did that for chemical and biological and Japan is undercutting the U.S. is undercutting – they don’t want to make it illegal. But this is coming, they are meeting now in Vienna and there’s going to be, in September at the UN, they are going to address it.

Meanwhile, President Barack Obama continues a push to “modernize” the U.S. atomic arsenal, with a cost of $1 trillion over the next 30 years. This despite his acceptance of the 2009 Nobel Peace Prize, predicated in part on promoting nuclear nonproliferation.