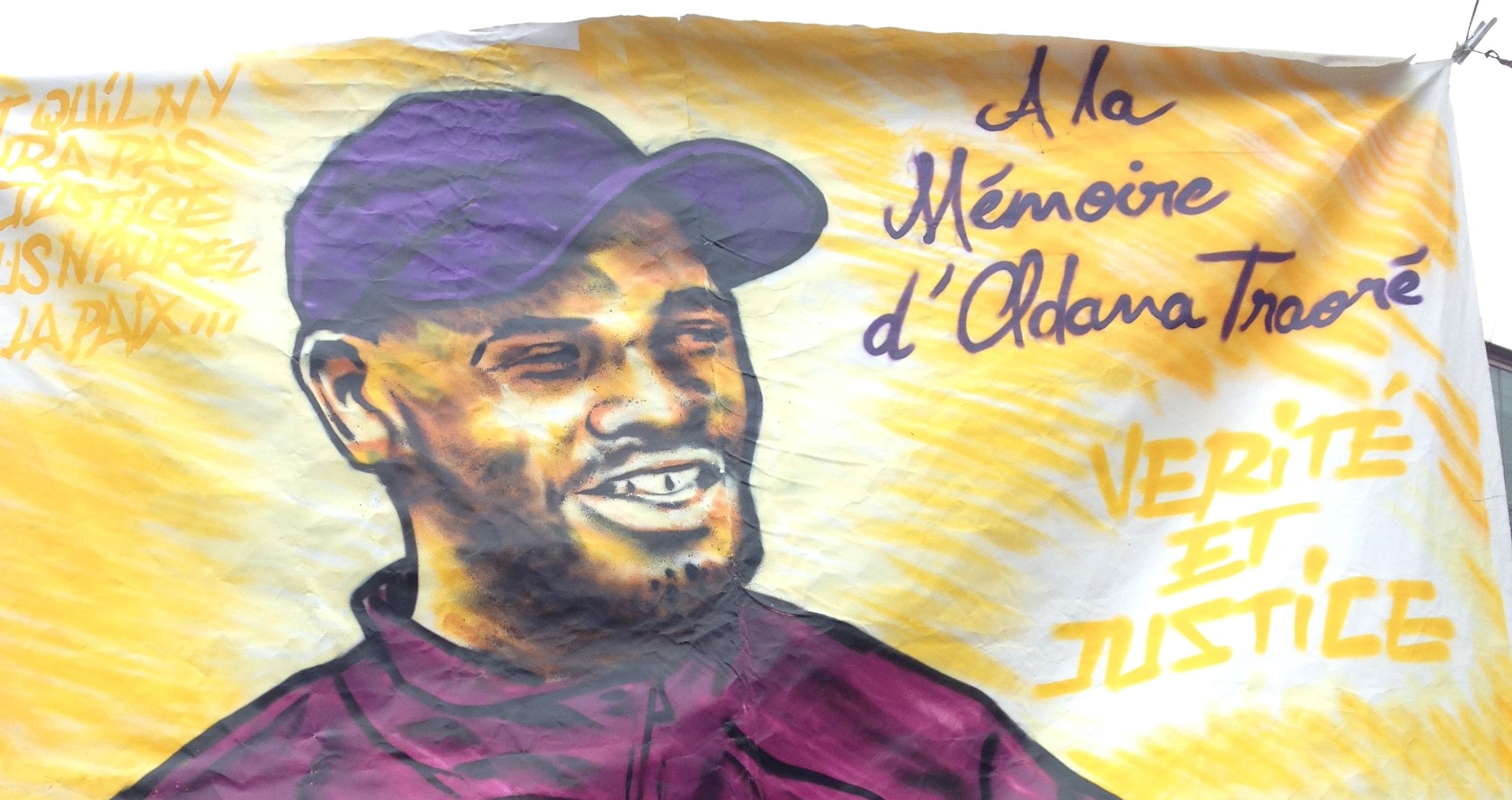 Angry protests in the Parisian suburbs followed last month’s death of a 24-year-old black man who apparently was suffocated in the back of a police van. As FSRN’s Khaled Sid Mohand reports, that’s not the only parallel with the Baltimore Freddie Gray case and the Black Lives Matter movement in general.

Thirty-one-year-old Assa Traoré is grieving. Last month her brother, Adama Traoré, died on his 24th birthday – in police custody here in the Parisian suburb where he lived.

The young man from the suburb of Beaumont Sur Oise had been arrested after confronting police over their arrest of his brother. The brother was released without charge, but his older brother was never again seen alive. Adama Traoré was a French citizen born in France. But his sister says the family decided to send his body to their father’s village in Mali.

“If he was buried in France, it would have been easier for us to visit him in a nearby cemetery,” Traoré explains. “But after a certain amount of soul searching, we decided that, as he was killed on French soil by French police, burying him in France would be like a gift to this country. So he won’t be buried here.”

The circumstances of the July 19 death still aren’t clear. The first autopsy declared he had succumbed to a serious infection. But the local prosecutor wrote that it had been heart failure.

These contradictory accounts have angered the family and fueled suspicions of a clumsy cover-up. The police report states that three policemen had trundled him into a van and were sitting on him to restrain him. And there are conflicting reports by the police officers and prosecution over whether he resisted arrest.

The family’s lawyer says the 24-year-old could have suffocated under the weight of three grown men and says there’s evidence that first death certificate was doctored.

The family commissioned a second autopsy which revealed he’d indeed asphyxiated from a lack of oxygen.

There are parallels between Adama Traoré’s death and that of Freddie Gray, who died in the back of a police van in Baltimore last year. The release of the second autopsy report has galvanized people in the suburb of Beaumont-sur-Oise.

Pierre Motin is with ACAT, a French rights group that campaigns against the death penalty and police violence in general. He says there’s little accountability especially here.

“In the French suburbs, where police brutalities seems to be more frequent, people don’t press charges, and when they try to press charges, these charges are not recorded,” Motin says. “That’s why we need transparency about the use of force by the French police.”

There are also common themes here, as with the Black Lives Matter movement in the United States. Motin says poor race relations are a factor.

Family members, friends and other sympathizers tried to hold a peaceful rally against police brutality last weekend but authorities denied them a permit to march.

France has been under a State of Emergency since last November’s deadly attacks and police have expanded powers to arbitrarily forbid public demonstrations.

“What we know is, that the Muslim community in France has been especially targeted by these measures,” explains Nicholas Krameyer of Amnesty International’s France chapter. He says counter-terrorism police have raided about 3,500 houses in these suburbs – all without warrants – and all without producing enough evidence for an indictment on terror-related charges.

“Our report on what has been done during the first three months shows clear discriminatory and arbitrary measures taken against the Muslim community,” Krameyer says. “And nine months of state of emergency in France, there has been no judicial inquiry against them.”

Rights activists say statistics show that, on average, 15 people are killed by the law enforcement every year. But citing cases like Assa Traoré, who officially died of an infection, they say the real number is much higher.

“We lived here in the suburbs, which are now under the state of emergency, since more than 30 years. The police now are well-trained and the military weapons they’re currently using have been tested in our neighborhoods,” says Amal Bentounsi, a 40 year old activist. She founded an anti-police brutality organization after her 28-year-old brother was shot dead by police in 2012. Her brother’s killing was ruled justified out of self-defense. She says that’s normal and largely to blame for the high violent crime in the area.

“Impunity can create monsters. I, myself, thought once to become such a monster,” Bentounsi recalls. “When you know you won’t get justice, then you start thinking about crazy things. Can you picture me, a mother of four kids, who once thought about revenge?”

The second autopsy for Adama Traoré won’t be certified until later this month. Only then will family be able to file a complaint of manslaughter against police.

They aren’t optimistic. Over the past 20 years 300 people have been killed. Yet only two officers have been convicted and jailed for murder. But those odds won’t stop Assa Traoré from trying.

What I want is truth and justice for my brother,” Traoré says. “My brother went into custody alive and came out dead.”

Tensions remain high in the Parisian suburbs where unemployment and distrust of the police remain higher than the rest of the country. Deadly riots erupted here little more than a decade ago and there are fears that without real answers, widespread unrest could be on the horizon.