France to live under state of emergency for three months 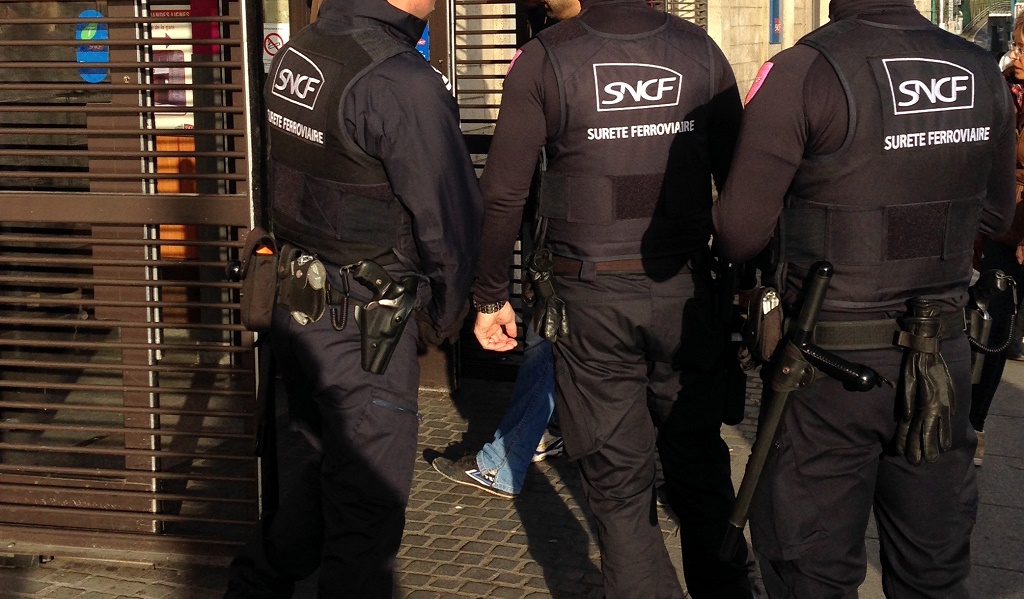 Police patrol the streets as France is in a state of emergency. (Photo credit: Khaled Sid Mohand)

One week after a series of terrorist attacks in Paris, officials in France have extended a state of emergency in the country for three months. The death toll rose to 130 when one the hundreds of people injured in the attacks died; that number does not include perpetrators. Authorities continue to conduct raids in both France and Belgium, and early Friday officials revealed that a third person died in the Wednesday police action that reportedly killed the mastermind of last Friday’s attacks.

An anti-terror rally planned for Friday outside the Grand Mosque in Paris was canceled, and officials have banned all public demonstrations through the weekend. Despite the ban, progressive groups are planning to rally Sunday, calling for more refuge for Syrian asylum seekers and less French military involvement in the war and violence they are fleeing. Khaled Sid Mohand reports from Paris.

The French Parliament has approved a three month extension of the state of emergency declared by President François Hollande in the wake of the November 13th Paris attacks. The emergency measures grant security services and police expanded powers to act without judicial oversight.

“I don’t think it’s a good decision,” says Alain Gresh, former director of the political magazine Le Monde Diplomatique. “I’m not happy with this because we had this discussion about special law since years and we have adopted, year after year, new laws against terror and meaning against a part of our liberties and of our democracy,” Gresh explains. “I don’t think it’s a good thing. We have now more than 100 people put under house arrest and they have nothing to do with what happened.”

Members of the judicial branch have also sounded the alarm. In a statement released this week, the magistrate union said “the state of emergency dangerously modifies the nature and extent of police and administrative powers.”

Police can now search homes and enforce house arrests without establishing probable cause or needing a warrant. It’s all in the name of cracking down on terror suspects.

On Wednesday morning, Parisians got their first glimpse of those powers when police conducted a seven-hour-long raid in a northern suburb where Abdelhamid Abaaoud, the alleged mastermind of the November 13 attacks, was hiding.

Sounds of grenades and the rattle of automatic weapons echoed all over the neighborhood as the suspects traded fire with a SWAT team. More than 5,000 bullets were fired.

According to the French prosecutor’s office, Abaaoud was killed during the raid.

Thirty-nine-year-old Yassar, an Egyptian immigrant who works as a building painter, was sleeping in the neighboring building when he heard the first explosion.

“I woke up around 4 o’clock. I heard a big boom and I opened the door to figure out what was going on, then I heard other detonations and I heard the police telling us not to go out, don’t open the windows. Less than 10 minutes later a helicopter was flying over our heads and pointed its spotlight on our building,” Yassar recalls. “So we were stuck inside our apartments until 5:30. After what happened last Friday, we understood that there was a situation. I got scared. My children’s neighbors were awake and I could see in their eyes how terrified they were.”

The police evacuated Yassar’s building at 5:30, but he couldn’t leave the area because buses, the metro and trams were all shut down for safety reasons.

France’s Muslim community is on edge in the wake of the attacks and many of its members, particularly women who wear traditional headscarves, have been keeping a low profile this week.

“Since the day after the attacks, I noticed a significant drop in the female clientèle, and when they do come, they usually come with their husbands or brothers or in a group,” points out Abdelkader Bezerara, a 46-year-old Muslim who works in an Islamic bookshop a few streets away from the epicenter of last week’s attacks. “We can feel a real fear in the Muslim community as much as in the French population in general. Less people in the streets, less people in the public transportation or they use them very early or try as much as possible to get back earlier, it’s a fact.”

Bezerara fears the same backlash the Muslim community faced in the wake of the Charlie Hebdo’s killing earlier this year, but Nacera Guenif, professor of Sociology at the University Paris 8, is more optimistic.

“This time, I think the victims have totally different kind of background,” Guenif told FSRN. “I mean these are ordinary people, young people, and I was quite interested in noticing that the people that were interviewed, that survived some of the attacks, were very dignified in the way that they spoke, they didn’t have any hatred speech, a will to go after the killers. They were much more remote in the way that they spoke, which coming from the young French people is very interesting, because this would mean that the tendency to unleash Islamophobia as a righteous expression of not just hatred but also bitterness or even mourning – I mean mourning through Islamophobia – is something that is less unlikely to happen this time.”

All the places targeted in the attacks have been transformed into memorials with flowers, candles and messages of love, peace and hope.

39-year-old Cédric Le Guern is a graphic designer. He visited one of the sites: Republic Square just in front of the statue of Marianne, symbol of the Republic.

When asked, “Do you feel anger?” by FSRN, le Guern replies, “Not really. Sadness, pain, despair, I guess, being here right now in front of this monument and the proof of that sharing or that togetherness, I think I feel love.”

“There might be a backlash against the Muslim community?” FSRN asks.

“Well, it might happen, that would be really sad,” says le Guern. “Because, actually, living in Paris there is a lot of Muslims. Most of my neighbors are Muslims, and they were touched as much as we did. I can tell that they feel more anger and pain than us.”

Immediately after the Paris attacks, President Hollande moved to close the French borders, but he has since publicly pledged to take in 30 thousand refugees over the next two years.

Despite the state of emergency prohibiting demonstrations, leftist organizations have called for a demonstration on Sunday. They plan to march against what they call “the shameful French refugee policy,” demanding to welcome more refugees, the lifting of the state of emergency, and opposition to the involvement of the French armed forces in Syria.