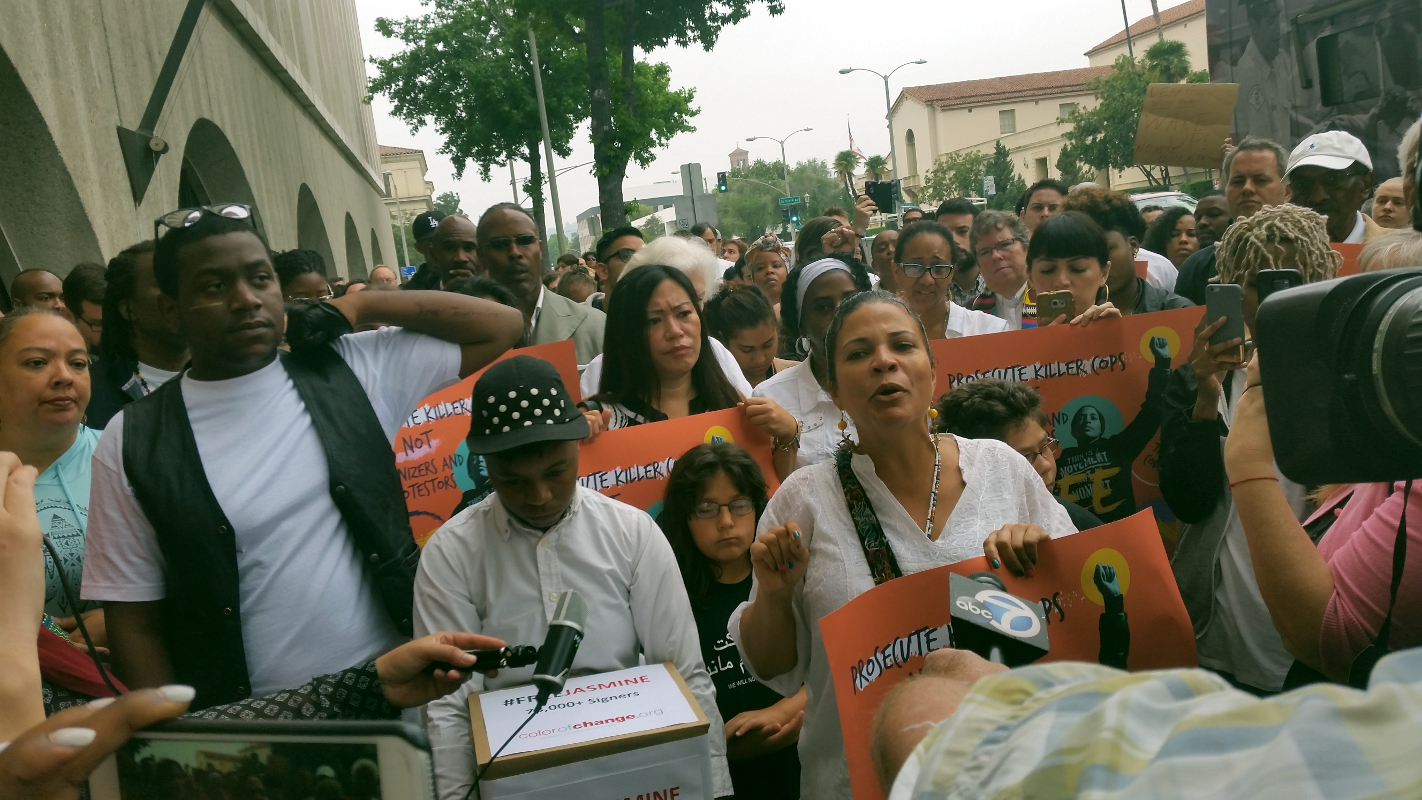 Supporters of Jasmine Abdullah rally outside of the Pasadena courthouse during her sentencing hearing, June 7, 2016. (Photo credit: Carla Green)

The irony was not lost on crowds who gathered outside the Pasadena courthouse and say the charges were punishment for political activism in favor of greater police accountability in communities of color. From Pasadena, Carla Green has more.

On an otherwise quiet Tuesday morning in Pasadena, California, well over 200 people gathered outside the town’s courthouse to support Jasmine Richards, a local Black Lives Matter organizer who goes by the name Jasmine Abdullah.

Abdullah was at the courthouse for sentencing. On June 1, she was convicted on charges related to her arrest in a park shortly after the end of a protest in August of last year.

Police say they arrested Abdullah after she and other activists rushed officers and a patrol car. Prosecutors argued Abdullah and her friends were trying to free someone from police custody, a felony offense under a law that was initially conceived to protect Black arrestees from seizure by lynch mobs.

But Black Lives Matter national communications director Shanelle Matthews says Abdullah wasn’t arrested for what she’d done in the park that day, but rather for her activism. Abdullah is the latest in a string of California-based activists who have been arrested under the same criminal statute.

“We know that Jasmine was targeted. We know that the Pasadena police harassed Jasmine, they followed her around the neighborhood,” Matthews says. “What we’re seeing is a very thoughtful and nuanced attack from lawmakers on Black Lives Matter organizers.”

“That is what it conveys, both for the relationship with the Black community, but actually generally in the community,” Matthews explains. “Black dissent becomes a bell weather, a canary in the mineshaft for the rest of society.”

The crime Abdullah was convicted of was called “attempted lynching” until about a year ago, when California governor Jerry Brown signed a bill amending the name to remove any reference to lynching. He approved the change after Black Lives Matter Sacramento activist Maile Hampton was charged with the crime, amidst similar accusations of political profiling. The felony charge against Hampton was later dropped, which means although Abdullah is not the first Black woman to be accused of the crime, she is likely the first Black woman to be convicted of it.

Matthews says the entire episode is an example of the vicious cycle of mistrust, police impunity and imprisonment that Black Lives Matter activists have been talking about since the movement’s inception. What it means to try to stop the police from arresting someone – the crime Abdullah was convicted of – changes radically when a community feels it can’t trust the police, she says.

“We know that police cannot always be held accountable to return detainees safe and unharmed and alive,” Matthews points out. “So we know the implications of this or that when we’re living in a time in this political climate where we can’t trust the police to be accountable to the people, to protect and serve for our collective safety, then removing a person from police custody can be a matter of life and death.”

That the hearing fell on the day of the California presidential primary vote was not lost on protesters, many of whom sported small, oval “I voted” stickers on their lapels.

“Especially on today, the day that people are voting, the day that we are supposed to realize the ideals and the promise of democracy, we demand justice for Jasmine, because if anything, Black Lives Matter represents the best democratic ideals of this country,” says Asian Americans Advancing Justice’s Los Angeles policy director Betty Hung. “We know that this country is not equal, it is not fully just, that Black lives have not been treated with the dignity and respect that Black communities deserve.”

The crowd outside the courthouse continued to grow throughout the morning as protesters waited to hear what Abdullah’s sentence would be, chanting “Free Jasmine” and calling for the activist to be sent home without serving any further jail time.

Two hours after demonstrators had begun to gather, the news came: Abdullah had been sentenced to 90 days detention and three years probation, with credit for 18 days detention already served. But felony convictions carry implications beyond associated jail time,  and Abdullah’s will likely mean she faces increased scrutiny when seeking future employment.

Correction: The original version of this segment incorrectly indicated that in California, individuals convicted of felonies cannot vote until the end of probation.  Find information about voting with a criminal record in California here.