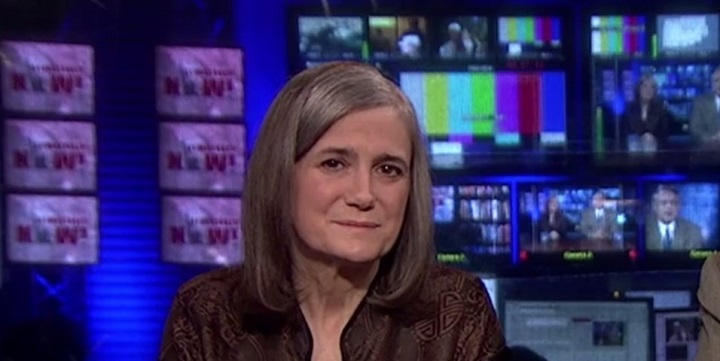 Amy Goodman, as featured in an FSRN fundraising video.

A North Dakota judge rejected charges against Democracy Now!’s Amy Goodman Monday. Goodman returned to the state to continue coverage of the Dakota Access resistance camps and to face legal action against her. FSRN’s Nell Abram has more.

Crowds gathered outside the Mandan, North Dakota courthouse Monday afternoon as prominent journalist Amy Goodman appeared before a judge. A phalanx of police, clad in riot gear and carrying batons, stood poised along the sidewalk; at least one person was arrested.

Goodman returned to the state to face charges related to the Democracy Now! team’s coverage of the Standing Rock Sioux resistance to the Dakota Access pipeline. After the judge rejected the riot charges, she emerged from the courthouse and said she felt vindicated.

“Standing up for ‘Freedom of the Press’ goes beyond journalism. ‘Freedom of the Press’ is about the public’s right to know. That right to know is sacred; that’s what makes a democracy meaningful, when you are able to make informed decisions,” says Goodman. “We’ve got to open up the media to everyone’s voice; I see the media as a huge kitchen table that stretches across the globe, we all sit around and debate and discuss the critical issues of the day.”

Goodman continued, explaining why she thinks elevating the voices of those often ignored and unheard is vital: “When you hear someone speak for themselves – a Lakota grandmother; an Ojibwe grandchild – it breaks down barriers. It challenges the caricatures and stereotypes that fuel the hate groups. It is so important that we open up this dialogue. You don’t have to agree with what you hear, but you begin to understand where people are coming from. That’s the beginning of peace. I think the media can be the greatest force for peace on Earth, unfortunately, all too often it’s wielded as a weapon of war. Which is why we have to take the media back.”

In early September, a Democracy Now! crew traveled to the resistance camps and protests to document the growing movement against the pipeline. While there, they filmed a private security company unleashing attack dogs on water and land protectors.

“CBS Evening News, NBC, MSNBC, CNN, Canadian Broadcasting Corporation, BBC, NPR – and it went on from there. We call that trickle-up journalism,” Goodman says. “The state cannot stop the journalism, the state must not stop this journalism. Violating the First Amendment is not good for North Dakota, it’s not good for this country.”

If completed, the nearly $4 billion project would carry a half a million barrels of crude oil from the Bakken oil fields to a transfer station in Illinois. The D.C. Circuit Court has twice refused to grant the tribe an injunction halting work on the contested section of the pipeline. But almost immediately after each ruling, the federal government issued an unprecedented three-agency statement in which the Interior, Justice and Army Departments have asked the developer – Energy Transfer Partners – to voluntarily stop work.

Goodman is not the only journalist who has been arrested during actions opposing the Dakota Access pipeline. Multiple reporters with the independent media collective Unicorn Riot have been jailed in recent weeks, and award-winning documentary filmmaker Deia Schlosberg has been charged with three felonies and faces up to 45 years in prison.