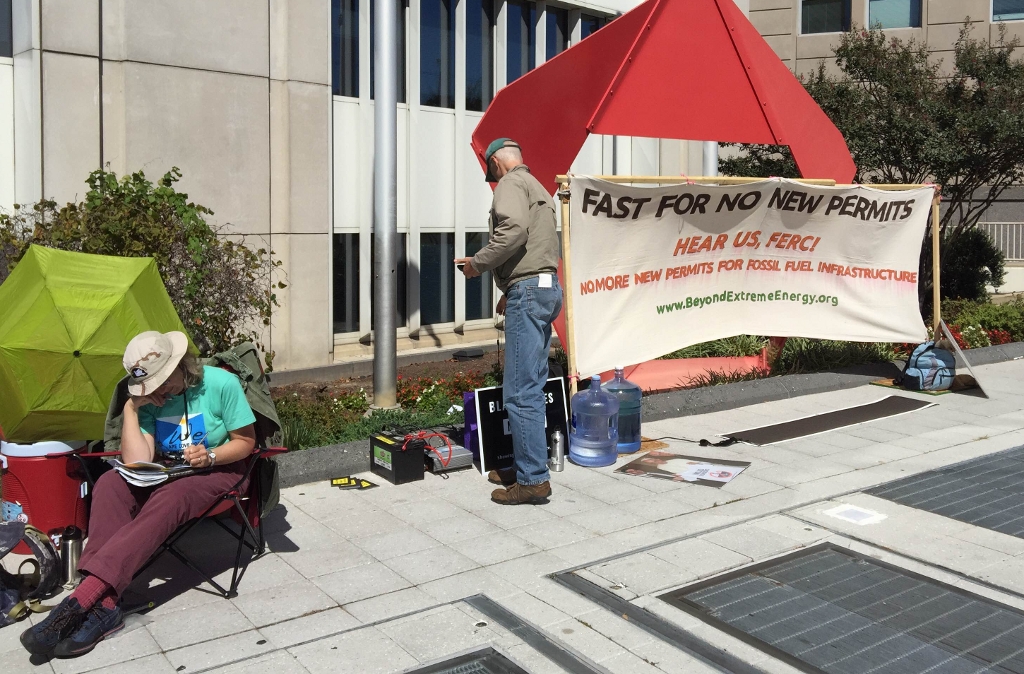 Members of "Beyond Extreme Energy" hold a vigil and fast outside of FERC headquarters. (Photo credit: Jani Actman)

A bill to reverse a long standing ban on the export of American crude oil is making its way through Congress. This, as fasters gather outside of the Federal Energy Regulatory Commission, asking for a freeze on permits and a more renewable approach to energy policy. Nell Abram has more.

HR 702, introduced by Texas Representative Joe Barton, seeks to overturn a 1975 ban on the export of U.S. oil to foreign markets. The ban initially took effect in response to the energy crisis and was intended to increase U.S. energy independence from producers like OPEC nations.

Proponents of lifting the ban argue advances in extraction techniques have allowed the U.S. to increase its production capacity and the export ban prevents companies from taking advantage of market opportunities.

Texas representative Bill Flores says that, “As the world’s number one producer of oil and gas, we now have the opportunity to counter hostile regimes in places like Iran, Russia and Venezuela and are more able to bring stability to global energy markets.”

Flores spoke during a Thursday mark-up of the bill in the House Energy and Commerce Committee. Members opposed to lifting the ban noted that the U.S. is still unable to meet its domestic energy needs and imports about one quarter of the oil it uses.

“This bill is an unconscionable giveaway to big oil at the expense of American consumers, America’s national security and our long-standing policy of energy independence,” says Florida representative Kathy Castor. She argues that selling U.S. oil to foreign markets will result in higher gas prices at the pump and ultimately benefit economic rivals in Asia.

“This bill will provide a strategic advantage to China,” claims Castor. “Well, that’s a fine gift as president Jinping arrives in the U.S. next week. You’ll pass this bill right in time for the Chinese president and I’m sure he will appreciate it. I’d ask my colleagues to side with American consumers. American jobs and our own national security and reject the bill.”

Others argued lifting the ban would trigger a rush to drill and produce, benefiting big oil companies at the expense of the U.S. environment, an argument brushed off by Representative Chris Collins of New York.

“If we can double production in ten years, that ought to be a noble goal. With regard to environment and climate change, that’s a matter not of productivity, that’s a matter of demand. But let’s use our supply to meet the demand in the global marketplace,” says Collins.

Beyond the issues of energy independence, economics and geopolitics, Representative Frank Pallone of New Jersey warned that hidden within the text of the bill is a serious threat to governmental authority to regulate oil exports.

“HR702 doesn’t just undermine current protective authorities related to crude oil,” says Pallone. “The legislation also prohibits any federal official from taking any action at any time if it might restrict or enforce a restriction on the export of oil. The term ‘restriction’ is undefined in this bill and therefore of an unknown and dangerous scope.”

The bill passed out of the committee and is now on its way to the House floor.

As House lawmakers debated the crude oil export ban, 12 hunger strikers continued their sit-in outside the Federal Energy Regulatory Commission in Washington, D.C. The activists with Beyond Extreme Energy began their fast last week, calling for the commission to stop issuing permits for fracked gas infrastructure projects. The protesters accuse FERC of acting as a “rubber stamp” by issuing energy development permits with little to no oversight or refusal of requests.

Charles Chandler is one of the hunger strikers. He says that fracked gas is just one dirty energy sector they are concerned about. “We want fossil fuels turned off, and turned off soon – so there’s a chance that humans will survive. To be pushing for a new batch of fossil fuels, and much more emissions, at this time is insane. We should be pushing for clean renewable energy sources.”

The protesters are calling for the agency to prioritize alternative energy sources before fossil fuels. They plan to end their fast on September 25th, the day after Pope Francis is expected to speak to Congress about climate change and how it impacts the poor.

Jani Actman provided some sound for this report from Washington DC.