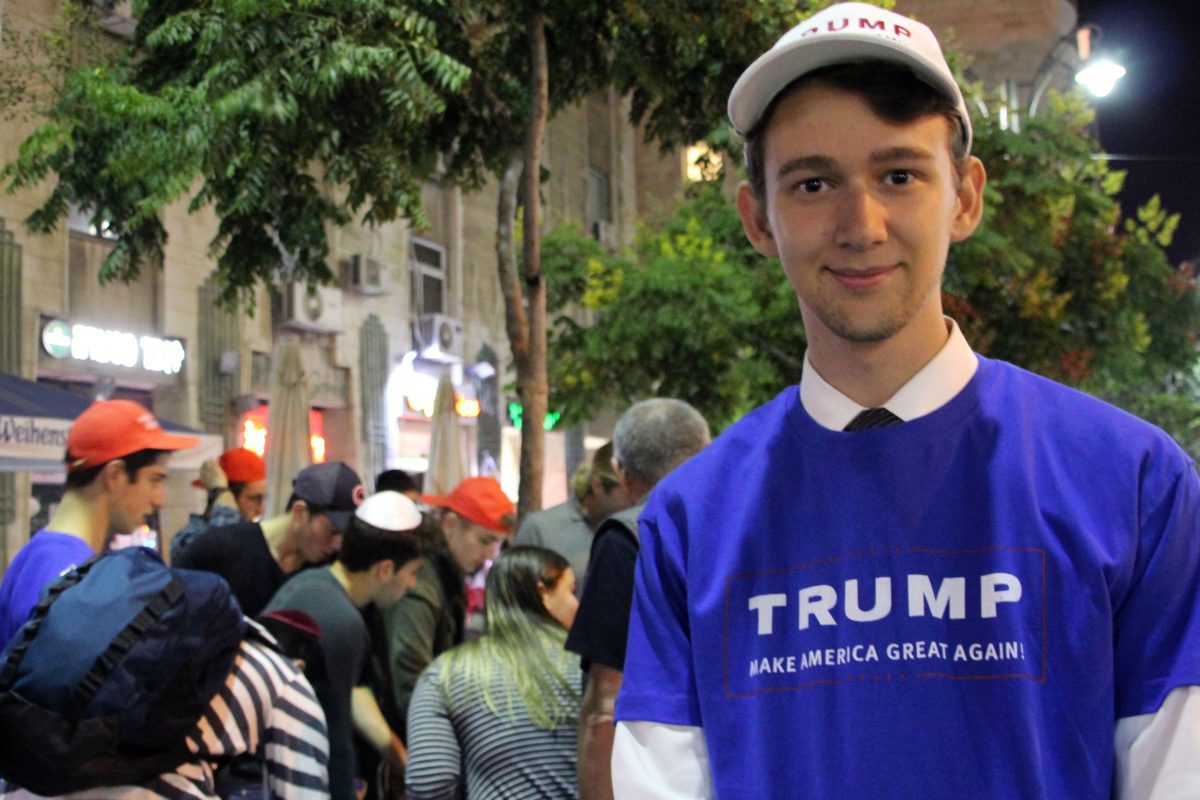 The U.S. presidential election is entering its final weeks and party activists are working non-stop to get voters to cast their ballots – including those who live abroad. An estimated 2.6 million eligible American voters live outside of the U.S., about 130,000 in Israel. Though that may seem like a small number,  GOP candidate Donald Trump’s supporters in Israel are certain  their votes are crucial. Lena Odgaard files this report.

Elizer Roseman stands behind a small plastic table with T-shirts, posters and caps all bearing the slogan: Make America Great Again. The scene is not in America, though, but on a main pedestrian street in West Jerusalem in Israel.

Roseman and a handful of fellow Donald Trump supporters are seeking out Americans in the street and offering Trump merchandise to those who fill out voter registration forms.

People flock to the table within minutes. Most of them are American Jewish youth who are spending a gap-year studying in Israeli Yeshivas. The same goes for 18-year-old Roseman from Texas.

“I’m taking a year abroad in Israel studying in a Yeshiva, and I figured that I wanted to give back to my country,” says Roseman.

It’s the first time Roseman will cast his ballot and to him Trump’s stance on Israel is decisive.

“His Israeli policy is probably one of the best we have seen in history,” Roseman says. “It is essential for this country and for America.”

A recent report published by the Federal Voting Assistance Program estimates Israel has around 130,000 eligible U.S. voters. This year, Republican campaigners in Israel seem determined to get these voters to back Trump.

At the Israel Arts and Science Academy, a private high school in Jerusalem, students head to the school’s auditorium for a debate between Chairman of Republicans Overseas Israel, Mark Zell and Sheldon Schorer of Democrats Abroad in Israel.

Zell believes that the Israeli-American vote can be crucial.

“We have had some experience in the past. The 2000 election, President George W. Bush became president by virtue of 537 votes in Southern Florida, in that same election there were 1,500 votes for George W. Bush from Israel,” Zell points out. “If they hadn’t voted he hadn’t been President of the United States, so the Israeli vote is important from that standpoint.”

For this year’s election, the pro-Trump campaign has set up campaign offices throughout the country as well as in Israeli settlements in the Palestinian West Bank. While many of these are makeshift offices in private living rooms, they have an important practical and symbolic role, says Zell.

During Donald Trump’s campaign he has said that Israel should continue to build in the settlements in the occupied Palestinian West Bank, despite the fact that the settlement are considered illegal by most of the international community. He has also vowed to recognize Jerusalem as the capital of Israel.

Such statements go against 50 years of American policy across party lines.

“I don’t think that it’s going to make that much of a difference though, and the reason is because most American Jews who do come to Israel, at least in my experience, most come from New York and California,” Schorer says.

He points out that the majority of Jewish voters in America traditionally support Democratic candidates. But in Israel, American Jews seem more right-leaning.

“Many of the early ones were the socialist, idealist, kibbutz-going and that sort of thing, and they tended to be more Democratic. Many Americans who have come recently are ideologically motivated, some of them are more religious and some like to live in the administered territories,” Schorer explains. “Certainly those type of people would be more inclined towards the Republicans and against Obama, which I said was basically against settlements simply because he believes it’s something that hinders the fight for peace.”

An opinion poll from the election in 2012 showed that 85 percent of the votes coming from Israel had Obama’s opponent, Mitt Romney’s name on it.

“In nine out of ten times, these overseas absentee ballots are very marginal,” says journalist Allison Sommer, who has followed Israeli-American relations for almost 30 years.

She believes the Trump-campaign in Israel is about more than mobilizing voters: “I think that they are trying to send a message that Israelis support Trump. There is a core of Jewish Republican supporters who, on a regular basis, vote Republican, support Israel, believe strongly that the Republicans are much more committed to Israel than the Democrats. This year, they’ve got a problem. They see Donald Trump and they don’t feel comfortable with him. And therefore, by having a high-profile Pro-Trump movement in Israel, they are sending a message to American Jewish Republican voters in the United States that Trump is Kosher.”

This message seems to resonate among the American youth in Jerusalem. Eighteen-year-old Derek Orenschein from Los Angeles is busy filling out voter registration forms.

“I think that Trump is much more beneficial for Israel especially,” says Orenschein. “He is – not only America, he is gonna make Israel great again.”