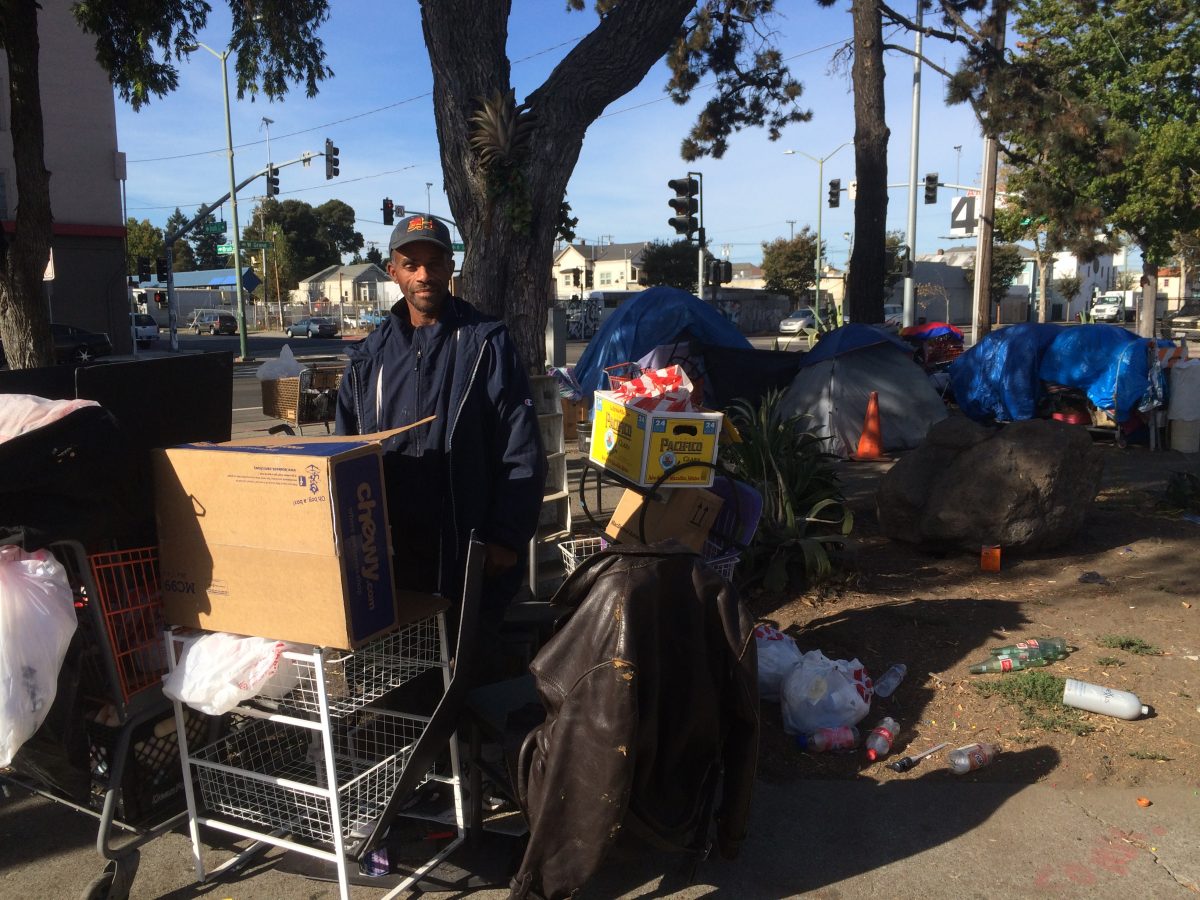 Floyd Smith stands in the island where he and fellow homeless people are living in tents. (Photo credit: Christina Aanestad)

Homelessness is on the rise in the U.S., now largely fueled by skyrocketing rents, gentrification, stagnant wages and an economy that has yet to fully recover from the 2008 recession. But, as FSRN’s Christina Aanestad reports, some communities are looking toward alternative policies to redress the homeless crisis. One is called Housing First.

It’s 9:00 a.m. and Floyd Smith is cleaning up this street he calls home while cars flood past.

“I don’t sleep here. I was, but then I seen the little rodents – rats had babies. I just cleaned up all that and set my tent up and all I know when the parents come out, I seen like 20 something little fuzzballs,” Smith recalls. “I threw my tent out in the street and got up out of here. So now, at night time I be right here or at the bus stop, just watching everything.”

This small intersection island between three streets near downtown Oakland, is just that – an island unto itself, with tents, a few trees, chairs and shopping carts next to a garbage can.

It’s a small village, says Floyd: “Jerry was the first one, the guy right there that yells at himself. Then I came in. Another brother and Leah, she came next, the first woman. Then it just started growing.”

It’s one of many tent cities cropping up in Oakland. Largely under freeway overpasses, people set up tent after tent after tent. Some bring couches, remnants of their latest eviction, or a table and chairs. With no sanitation facility, the sidewalk has become the de facto restroom.

Across the street from the Island, 70-year-old Calvin waits with a friend outside the St. Vincent De Paul mission where meals are served. He lost his place when his rent increased.

“I get $980 a month. And you can’t get a place for $980 a month, you’re tore up. I mean they want rent $1,500 dollars first and last – and that’s for a studio. You know what they’re doing, they’re trying to push the black people out, and the poor people out – not just the black, Mexicans, white. If you don’t have verifiable income, your ass gonna be on the street. You can go down the street there to the tents.”

“I think a lot of it has to do with the growing unaffordability of housing, and ongoing, other economic issues: lack of full or adequate employment; wages that have become stagnated that are not increasing with the cost of living,” Hustings explains.

According to the U.S. Department of Housing and Urban Development, or HUD, in 2015 the homeless population grew by 10 percent. More than half a million people are sleeping on the U.S. streets annually. But Hustings says those estimates are conservative – that upwards of 3.5 million people may be sleeping without shelter each year.

This year the city of Los Angeles declared a state of emergency due to the homelessness, and called on Governor Jerry Brown to help find solutions to the growing problem.

In Oakland, city officials have adopted a new Compassionate Communities program that places public toilets near tent cities and is slowing down the raids on homeless encampments.

But some areas are taking a more progressive approach, like Sonoma County, an hour north of Oakland, which has adopted a policy called Housing First. It prioritizes housing over providing other social services or criminalizing homelessness.

Rex Bishop is a Vietnam veteran who became homeless after his partner of 41 years died and he could no longer afford rent in Forestville, California. He now lives at the Palms Inn in nearby Santa Rosa.

“I was on death’s door before I got here. I was very sick from living in my car, being cold and wet and not eating. It was something I never thought would happen to me, because of my background,” Bishop explains. “I didn’t even understand the concept. A lot of people just look at them like they’re ghosts and I was one of those people.”

Because Sonoma county adopted a Housing First policy, Bishop was able to land in an efficiency studio earlier this year at the Palms Inn. This one time hotel has been transformed into a housing facility for the homeless.

The county had a pool of money for homeless housing, but no viable locations or built facilities. Akash Kaila, the hotel’s owner, then entered into an agreement with the county and HUD.

“I ran the hotel as a hotel for four years and I built it up to be sustainable. Yet I was running it working 10 to 12 hours a day, every single day, and I decided that I didn’t want to do that the rest of my life,” Kaila says. “And so I wanted to find another sustainable model that also provides a social good.”

Kaila says he gets about $1,000 dollars a month per studio. Catholic Charities runs the facility and its programs.

Supervisor Shirlee Zane says the project, and the Housing First policy, actually save the county money – up to $11,000 a year, per person served.

“It costs more to provide emergency services. If somebody spends one night in the hospital they’re gonna spend $4,000. Same thing with the ER, too,” Zane points out. “It’s much more expensive for people to stay on the street than it is to provide, let’s say, an efficiency or one bedroom apartment with some supportive services such as a case manager.”

The state of Utah also adopted a Housing First policy, in 2005, and in less than ten years has reduced its chronic homeless population by 72 percent, according to the state’s 2014 comprehensive report on homelessness. The state’s goal is to end chronic homelessness by the end of this year.

Back in Santa Rosa, Kalia says he’s now turning his experience into a model for other private businesses and municipalities to replicate – one that is both profitable and propagates good in the community.

And the Palms Inn is just the beginning of Sonoma County’s Housing First policy. Supervisor Zane says they’re starting a tiny house village for homeless veterans that should be open by 2017.