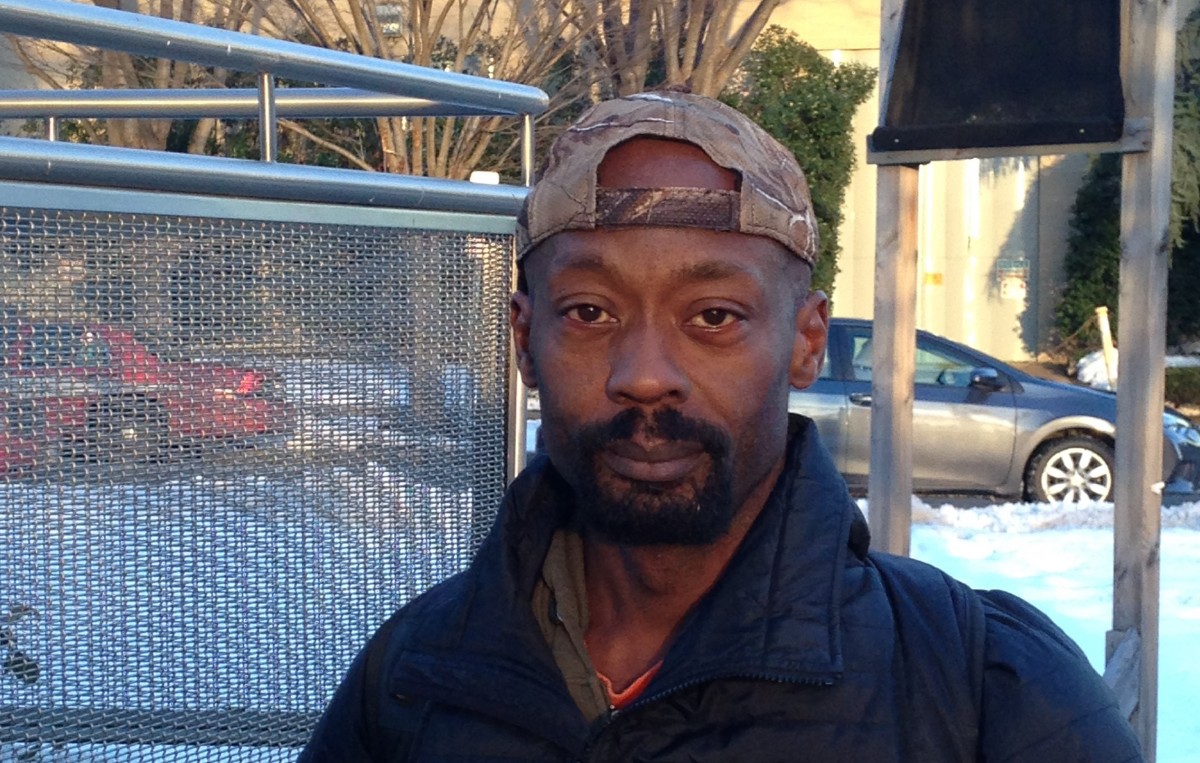 Fresh questions are surfacing about the fate of one of the largest homeless shelters in the United States, thanks to government documents unearthed by one of its own residents. His name is Eric Sheptock, and he’s been called the “homeless homeless advocate.” Living in the facility for the homeless within walking distance of the U.S. Capitol, the 46-year-old is one of the most recognized experts on homelessness in Washington. Jim McElhatton reports.

For 10 years, Eric Sheptock has been one of the most influential voices on homelessness in Washington, D.C. He’s filed open records requests, lobbied government officials and even sued a mayor. But when hears the construction vehicles and jackhammers all around the downtown homeless shelter where he lives, he figures its days are numbered.

“They’re putting a platform over the top of I-395, which is a below ground, open top freeway, and they’re going to put five buildings on top of it,” Sheptock explains. “And I’m pretty sure that when those buildings are completed, they’re not going to want to have a homeless shelter across the road.”

Sheptock stays in the Community for Creative Non-Violence homeless shelter, known as the CCNV, a massive hulking run down building that houses up to 1,350 homeless people on any given night. It’s just behind the headquarters of the U.S. Department of Labor. It started in 1986 with the help of the late activist Mitch Snyder, whose well-publicized hunger strikes pressured the Reagan administration into ceding the property to the District of Columbia government. All these years later, frustrated about a lack of information on the shelter’s expiring lease deal, Sheptock filed Freedom of Information Act requests with federal and city agencies to find out more.

“When I filed the FOIA requests and I began the whole process, it was because I had a suspicion that the city already knew that the covenant was coming to a close and that they already had something up their sleeve. And so I basically asked them, ‘What plans do you already have in place?’” says Sheptock. “And what they generally said to me was, ‘Eric, we don’t have a plan yet, but now that you brought it up, we’re going to make a plan.’ And that kind of put me in a position where I was like, ‘Okay, well, I hope it goes well because if I began this process and it doesn’t end well, then I’m going to be to blame.’ It’s like when you get into a fight and you throw the first punch and you get knocked out. So I didn’t want to have that type of scenario play out.”

The land itself is worth tens of millions of dollars, city tax records show. According to statements from city officials, if and when the property is redeveloped money from a sale will be put back into homeless services, but those who shelter there also wonder where they will end up.

On a recent day, dozens of homeless people were standing around outside building, though few were willing to talk. Those who did mostly had more immediate concerns than the fate of the lease.

In response to his open records requests, Sheptock received a complicated paper trail of lease and deed records on multiple lots. More than a year ago, he alerted then city council member Jim Graham, who later held hearings and formed a task force to study the future of the shelter. Here’s Graham in an interview not long before he left office.

“CCNV is a very important facility for D.C. because it houses on some nights 1,350 people, single adults, no families though. And increasingly, fewer and fewer are young people, because we’re diverting them out of that shelter,” Graham points out. “And fewer and fewer are old people, because we’re diverting them out of the shelter. But it’s still a major facility. It’s obviously run down past its productive use in many, many ways.”

Adept at cajoling public officials, Sheptock is not new to the sort the strategy talk one might expect to hear from one of Washington’s K Street lobbyists. Ten years ago, he was living in Washington’s Franklin School 240-bed homeless shelter, when a retired Dominican nun and prominent activist named Mary Ann Luby came to warn its residents that city officials were poised to shut down the facility. She urged them to make their voices heard.

“About a dozen guys out of 240 decided to form a committee. We called it the committee to save Franklin Shelter. And the other guys there were a bunch of naysayers who said the folks at City Hall don’t want to hear us so we’re not going to speak and we don’t have time for it,” Sheptock recalls. “So the dozen of us, we all followed the lead of Mary Ann Luby and Mary Ann brought us down to City Hall and showed us who’s who in the D.C. government.”

In the end, the city backed off plans to close the shelter, only to shutter it anyway under a new mayor in 2008. With some pro bono legal help, Sheptock sued, though unsuccessfully. Still, as his advocacy work grew so did his profile, and he began attracting a big social media following. Reporters chronicled his difficult childhood in Atlantic City, his recovery from drug addiction and his move to D.C. to protest the war in Iraq. In 2010, the Washington Post reported how he wouldn’t move out of the shelter or take a full time job if it compromised his advocacy work. Sheptock isn’t much interested in these sorts of stories. He wishes the media would concentrate more on his work. And these days, his work is focused squarely on the future of the CCNV.

“I think what the public should care about is, well, let me put it like this: What happens a lot of times with the police is when they tell a homeless person you can’t sleep here, you can’t sleep there, but you don’t think about where they’re going to go, so they go to the next park and get on a bench there,” explains Sheptock. “An hour or two later, the same cop is coming by, telling the person, you can’t sleep here, either. And it’s like, where do they go? At some point, you have to stop telling people to move on and ask yourself where are they going to go.”

Beyond the future of the shelter, Sheptock also advocates in other ways. During the blizzard that immobilized Washington in January, he contacted city officials to get help for homeless D.C. residents snowed in at Union Station. A few days after the January snow stopped, Sheptock saw a news crew filing a spot about the blizzard in front of a Starbucks, just one block from the CCNV shelter. Sheptock asked the reporter if the crew also planned to do a story on how the storm affected homeless people in the nation’s capitol. He said she replied, “We only do stories that affect taxpayers.”

Sheptock shook his head and walked off, knowing his work is far from finished.