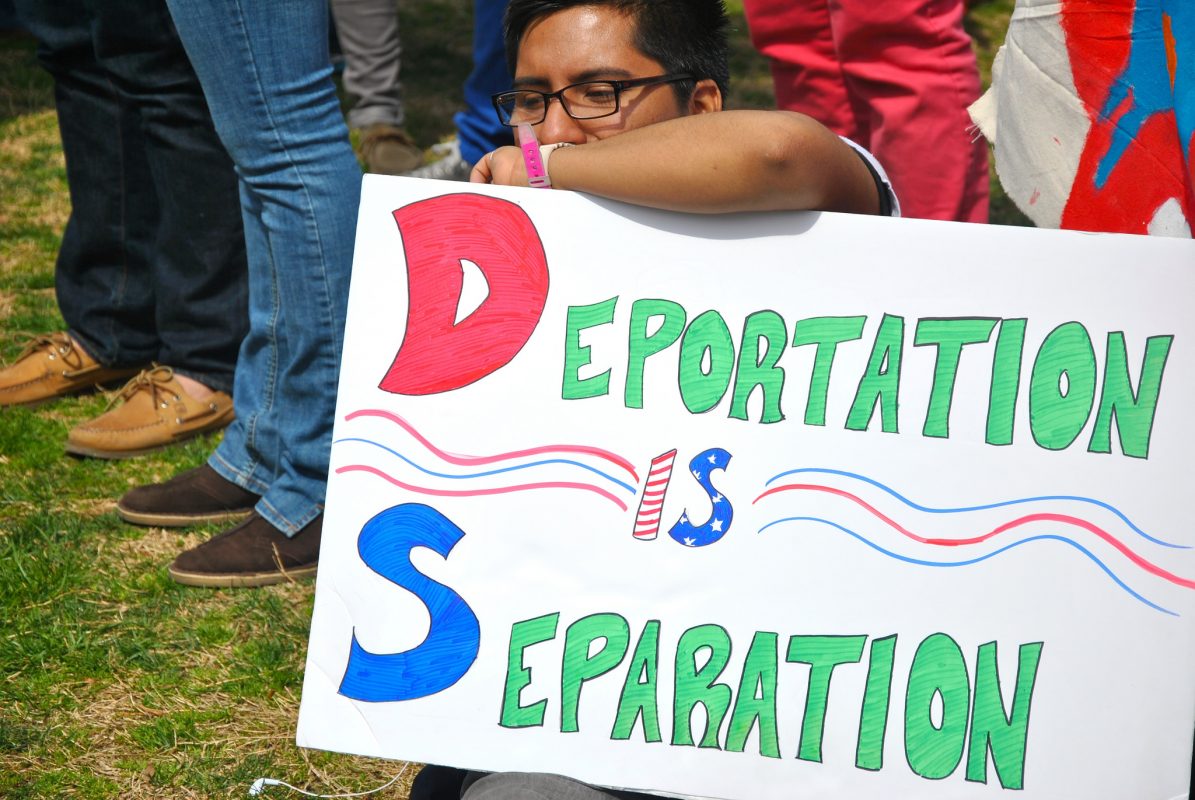 Donald Trump’s electoral college victory of has sent a wave of fear and trepidation through the millions-strong population of undocumented immigrants. During the campaign, Trump indicated he’ll move to reverse the Deferred Action for Childhood Arrivals policy, also known as DACA. The program grants temporary legal status to about 500,000 young people brought to the U.S. as children and is but one target of Trump’s 10-point immigration plan.  He’s also vowed to reinstate mass deportations and build a wall along the border with Mexico. Now that the reality of the new administration is settling in, immigrants rights advocates are preparing for the worst. FSRN’s Larry Buhl has more from Los Angeles.

A crackdown on undocumented immigrants was the centerpiece of the Trump campaign, and many are now bracing themselves before he can turn his words into actions.

Some mayors and city officials around the U.S. are pushing back. In Los Angeles, Police Chief Charlie Beck said that it was not the department’s job to enforce federal immigration laws. Mayors in Seattle, New York, Chicago, Minneapolis and other cities have promised to protect immigrants.

Last week, LA Mayor Eric Garcetti tried to reassure immigrants living there, documented and undocumented, saying, “We are a city that has never defined you, by the zip code you grow up in, by the country you or your parents are from. We don’t care how you worship God or where you worship god or whom you love. We care only what you want do in this city.”

But if campaign promises are to be believed, the federal government will care, and mass deportations are a possibility. Donald Trump has even threatened to withhold federal funds from so-called sanctuary cities.

Niels Frenzen is a clinical professor at the University of Southern California Gould School of Law. He says that while it’s a complicated matter, states and cities that don’t cooperate with a new immigration crackdown could be made to suffer: “The federal government has almost exclusive – not complete, but almost exclusive – authority over matters of immigration, both the admission of noncitizens to the United States as well as the deportation of noncitizens to the United States. We have existing laws on the book that make it illegal for state and local officials to refuse to share information about immigration status of noncitizens with the federal government.”

Under the Obama administration, undocumented people come under the radar of ICE when they’re arrested and booked for any infraction. That puts them in a shared law enforcement database. But that’s a relatively small number of people, far short of the millions of undocumented that the president-elect threatened to deport.

Rounding up and deporting millions of undocumented persons would require expanding the reach of immigration enforcement agents. Frenzen says it could happen, because it’s happened before.

“Back in the late 80s, early 90s, we had on average one major immigration raid of a factory or workplace or park per week. There was not a focus on immigrants having contact with the criminal justice system, there was a focus on workplace enforcement. That is something that could be replicated today,” Frenzen explains.

“There have been some calls from folks who are feeling very confused, some folks have fear in them,” points out Polo Morales, political director with CHIRLA, the Coalition for Humane Immigrants Rights in Los Angeles. He says that the threat to withhold federal funds would put cities like LA a bind. “If we go ahead and allow these deportations to take place, our local economies suffer because our immigrant communities are intertwined within our community. They shop, they eat, they go to the movies, they go to Disneyland, just like everybody else. There’s a lot of money at stake, in terms of the buying power they have, in terms of the jobs they create, and if you make a big hole and dent in that community then your local economy is going to suffer.”

“I definitely fear deportation,” says Melody Klingenfuss, a master’s student at the University of Southern California, studying nonprofit leadership and management. She’s originally from Guatemala. She supports herself and pays for tuition with a full time job. And she’s a DACA recipient, which temporarily shields her from deportation. She says if DACA is ended, it will leave her as a second class citizen, if she isn’t deported.

“I’m afraid that all the education that I’ve worked for so many years for will be worth nothing because I wouldn’t be able to get a job anywhere in the U.S. I also fear the backlash from people just finding out that I was documented and, if the program dies, and I can no longer say that, they will only see me as an illegal person, in their terms, which also makes me afraid for my safety, in essence, because we will be, and I will be, looked at as subhuman.”

Klingenfuss says she she’ll try to renew her DACA status before the administration changes hands. For those without DACA status, advocates say wait, because it may not serve them to give their information to the federal government right now.

Advocates for the undocumented say they should have money set aside for legal representation. And they suggest that others join in solidarity, and be prepared to petition their representatives to stop the most draconian plans of the upcoming administration.