Another pipeline protest heats up in the U.S. – this time in Florida 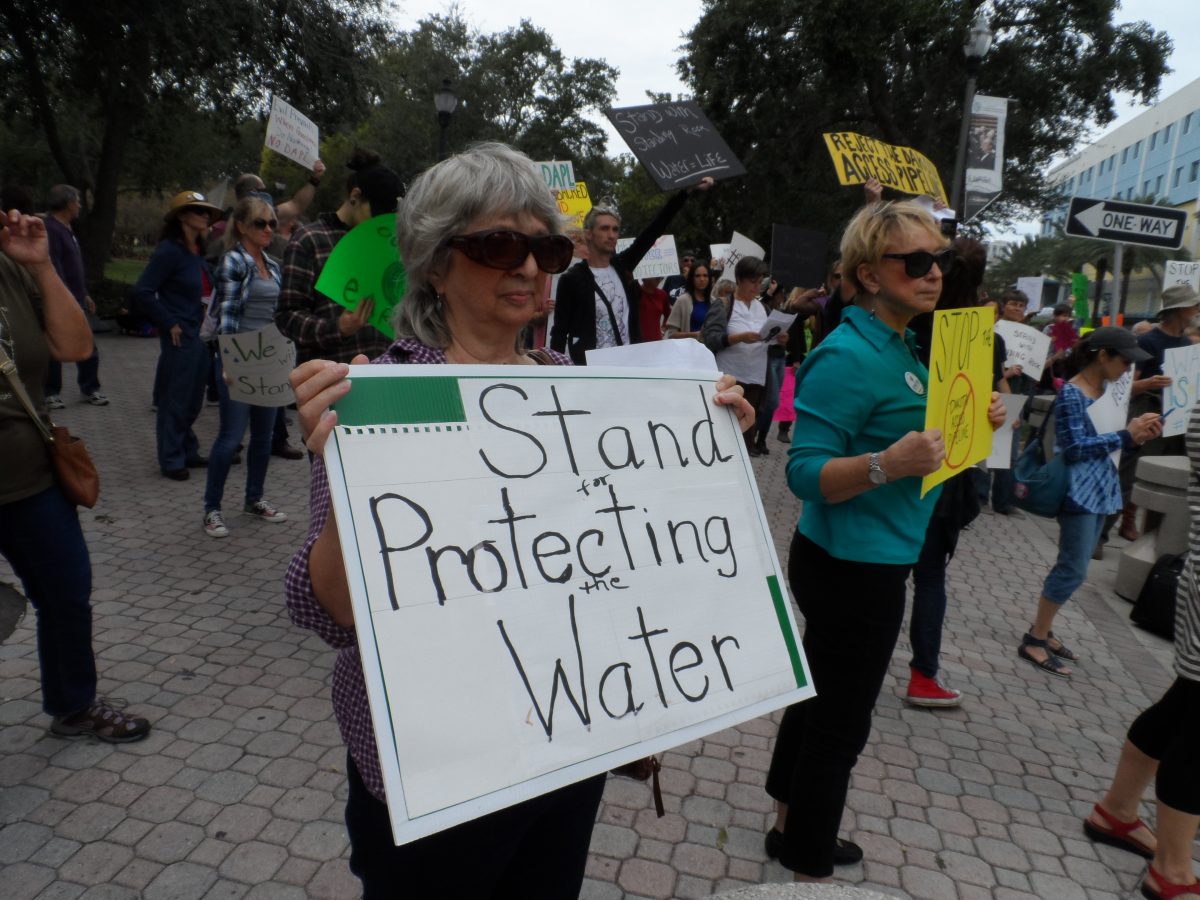 Demonstrators are a protest in Florida against the Sabal Trail pipeline. (Photo credit: Seán Kinane)

Around the world this week, activists rallied in opposition to the Dakota Access pipeline. But there’s another natural gas pipeline under construction in the southeastern U.S. that’s prompting environmentalists to protest and even risk arrest. FSRN’s Seán Kinane reports, work on the Sabal Trail pipeline has already led to contamination of a river in Georgia.

If completed, the $3 billion Sabal Trail pipeline would carry natural gas from Alabama, through Georgia and across much of northern Florida before finally connecting to existing pipelines near Orlando. Along the way, workers are drilling underneath rivers, and digging through wetlands and on top of Florida’s fragile limestone geology.

Environmentalists, like Johanna de Graffenreid, a coastal campaign organizer with the Gulf Restoration Network, say the risk of explosions is high and construction could harm water resources, including the state’s picturesque springs.

“Some of our concerns include wetland impacts, community health impacts and especially impacts to the Floridan aquifer, which is the main drinking water source for Florida, with 60 percent of the water that Florida relies on coming from that aquifer, which this pipeline is supposed to go over, under and literally through at some points,” de Graffenreid explains.

A lot of the national anti-pipeline focus is on North Dakota. But at a Dakota Access pipeline protest in St. Petersburg, Florida, environmentalists also warned about the Sabal Trail pipeline. On Tuesday, Liza Epstein marched and chanted with one hundred others along the main business district in downtown St. Pete.

“Well, I feel like, even more important for Florida is to focus on what’s happening on our ground, on our land. The Sabal pipeline, which is a 516-mile long pipeline that’s going through 60 percent of our water in our aquifer. So, it’s going to affect 60 percent of our drinking water,” Epstein points out. “This matters to me, because, I care about all of our population here. I care that we have clean water. The fact is, the pipeline is already leaking in Georgia, so this matters.”

That leak in Georgia occurred in October. According to the Florida Times-Union newspaper, the company building the pipeline notified the Environmental Protection Division in Georgia that “drilling mud” had spilled into the Withlacoochee River.

Environmentalists still found discolored water in the river last week. Water contamination like that is one thing that’s providing a sense of urgency to activists trying to stop construction along the pipeline route in Florida.

Another concern is the possibility that a new president might mean fewer environmental regulations. At the same protest, Ginny Nelson, says she’s not sure how the Trump administration could impact the construction of pipelines.

“I really couldn’t say. I don’t know what he’s going to do or not do,” Nelson opines. “I do know that more citizens should take it upon themselves get involved and stand for whatever issues they think are important.”

Peaceful protests against the Sabal Trail pipeline have sprung up near the Santa Fe River in North Florida during recent weeks. And last weekend, an activist even managed to lock himself to a truck involved in construction, which led to arrests. Mike Roth lives along the Santa Fe River. He was at the protest and not arrested, but his wife was.

The protesters have all bonded out of jail and are hoping their charges will be dropped.

The Gulf Restoration Network’s Johanna de Graffenreid insists that stopping the Sabal Trail pipeline is important for water and wildlife in Florida today, but especially for the future: “First of all, you should be concerned about it in all parts of Florida, because it might impact your drinking water source. And number two, because this is a major artery that’s going to cut through the woodland and wetland and farm areas of your state. Now, it’s going to do that in order build out fossil fuel infrastructure for possibly the next 20 to 50 years. If Florida is serious about moving to renewables, it should not commit itself to a new fracked gas pipeline to build out further fossil fuel infrastructure.”

In addition to the environmental concerns, many people are upset by the use of eminent domain, forcing people to sell their properties in the path of the pipeline.

“We have over 160 eminent domain lawsuits throughout the pipeline project,” de Graffenreid says. “Over 25 of those are here in Florida, mostly in Osceola County, so just a few counties over from us here in St. Petersburg.”

The pipeline is partly owned by the two largest electric utilities in the state. Duke Energy and Florida Power & Light insist the pipeline will be safe for Floridians and for the environment.