The fatal police shooting of 18-year-old Michael Brown in Ferguson – and a militarized police response to local protests – prompted nationwide vigils in dozens of cities across the United States on Thursday.

The hundreds of protesters who gathered at Leimert Plaza Park in South Los Angeles also memorialized Ezell Ford. The 26-year-old was killed after a violent confrontation with Los Angeles police officers on August 11, 2014; two days after the death of Michael Brown. Ford was also unarmed.

This week’s shootings once again call into question who communities can hold police accountable for fatal shootings of unarmed civilians. The response to protests in Ferguson – a suburb of St. Louis – have also prompted discussions about the militarization of domestic police forces.

All photos copyrighted by Lena Nozizwe. 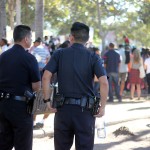 In sharp contrast to the military-like police presence in Ferguson, the uniformed presence of the Los Angeles Police Department at the rally was low-key. 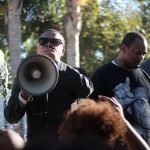 Veteran Los Angeles activist Najee Ali (R)listened as fellow activists and protesters shared their views on the police shootings of unarmed men in Los Angeles and in Ferguson, MO. 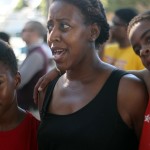 Flanked by her sons, a protester and mother gives a video interview explaining the importance of bringing her sons with her to the rally. 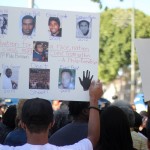 A protester raises a sign that memorialized everyone from Emmett Till to Ezell Ford. 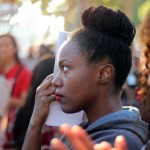 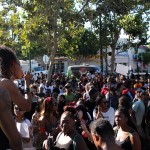 The hundreds of protesters gathered at Leimert Park Plaza all had the opportunity to speak out about the community and the shootings.