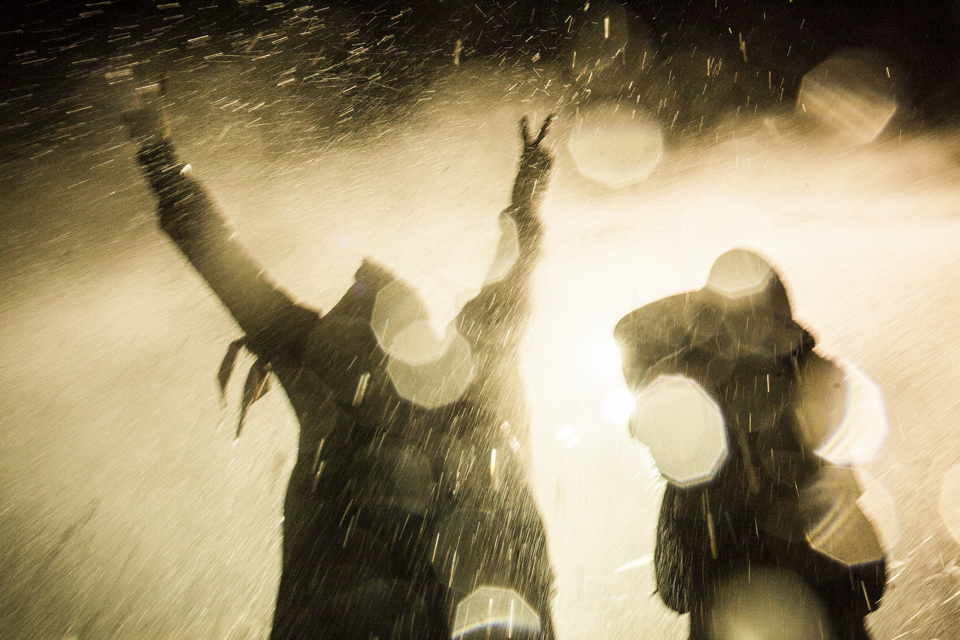 The protesters, who call themselves water protectors, were attempting to remove barricades on a bridge on Highway 1806. They say the obstacles prevent emergency vehicles from accessing the Standing Rock Sioux reservation.

The Morton County Sheriff’s Department called the action a ‘ongoing riot’ and said water was used to put out fires. Video from a live stream at the scene shows a high pressure jet of water hitting protesters directly in temperatures below 30 degrees Fahrenheit. Medics from the Sacred Stone camp estimate more than 160 water protectors were injured.

“They deployed 20 mace canisters in a small area in less than five minutes to the point where people have lost bowel function,” Angela Bibens of the Water Protector Legal Collective told Dallas Goldtooth of the Indigenous Environmental Network in a phone conversation recorded Sunday night. “At least one seizure has been witnessed at the front lines by our legal observation team. There have been people vomiting from the exposure to the mace. The water cannon has been mixed with the mace, and so even our legal observers have been exposed and are trying to deal with that while they’re doing up their notes. And canisters were shot at the medic area at the front line. There is at least one woman who has a broken kneecap. At least one elder went into cardiac arrest and was revived through CPR at the front line by medics.”

The Standing Rock Sioux Nation opened up a local gymnasium to serve as a shelter for those at risk of hypothermia due to exposure to water jets in subfreezing weather.

The Dakota Access pipeline has sparked unified opposition from Native Americans who say the project violates tribal sovereignty and endangers the drinking water supply for millions of people who depend upon the Missouri River. The pipeline construction near the Standing Rock Sioux reservation is nearing completion after multiple delays. Water protectors have used both the courts and protest encampments to attempt to prevent the completion of the pipeline that is slated to carry fracked oil from the Bakken formation in North Dakota to a distribution hub in Illinois.

Water protectors are calling on President Barack Obama to intervene to halt the pipeline’s construction before leaving office. According to a report by The Guardian, President-elect Donald Trump is an investor in the company building the pipeline.