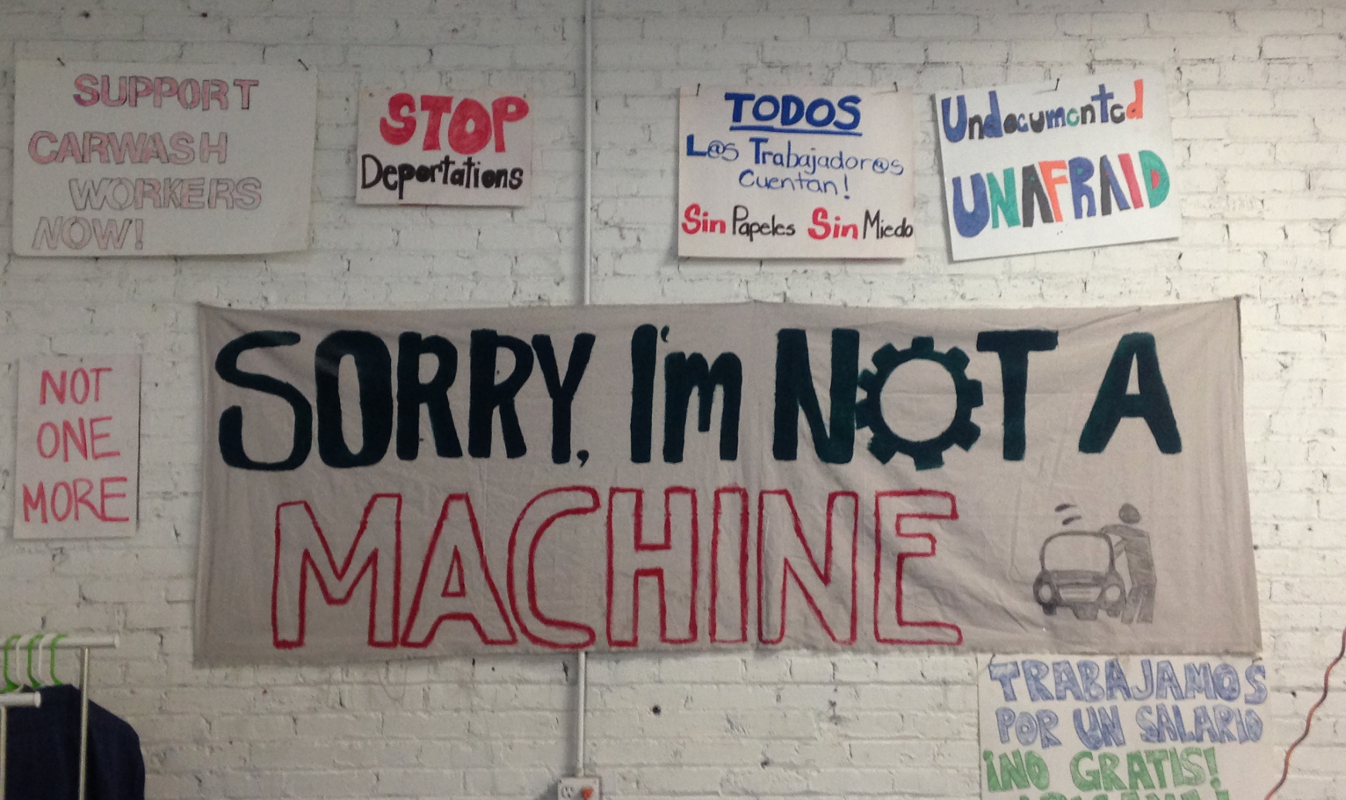 The U.S. Conference of Catholic Bishops has put its support behind legislation that would provide a legal option for recipients of DACA (Deferred Action for Childhood Arrivals) to remain in the country. Senators Lindsay Graham and Richard Durbin plan to re-introduce the so-called BRIDGE Act in the next session of Congress. If passed, the bill would act much like DACA, but would be harder to reverse with the stroke of a pen. DACA came into force with an executive action from outgoing President Barack Obama. President-elect Trump has suggested that he may reverse DACA upon taking office. In Los Angeles, the fear that took hold in the wake of the election has turned to action and activism. Paulina Velasco reports on how the city’s immigrant community is preparing for the Trump administration.

On a chilly December morning in South Central Los Angeles, people file into a warehouse which doubles as the offices of the CLEAN Carwash Campaign, an organizing network for carwash workers in the city. Today, it’s a space for a free legal clinic for undocumented immigrants.

Emi MacLean is one of the eight lawyers meeting with people one-on-one to see what they can do to get their papers in order. She works with the National Day Laborers Organizing Network.

So what legal advice is she giving people for whom so much is uncertain?

“We’re certainly advising people to get any assistance that they can as quickly as possible to regularize their status, if there’s any way to do that,” explains MacLean. “And to know their rights, to be informed, to be able to push back if there’s efforts to try to deport them or their family members.”

Marcela is an organizer with California-based Immigrant Youth Coalition. She talks to the dozen or so people gathered around a projector showing Know Your Rights diagrams – what to do in interactions with police, how to invoke the right to remain silent.

For over an hour, organizers explain the different circumstances that can lead to deportation. They also discuss options for obtaining legal residency. They’ve been doing this for years and have been especially busy during the current administration. More than two million people have been deported during President Barack Obama’s term – a record for any U.S. president.

Parents, children, and young adults listen attentively while waiting to meet with a lawyer.

Patricia’s been here before. She came to the U.S. from Mexico in the 80s, got her residency papers and is studying to become a citizen. Now she’s fighting to keep her son in the country. He was detained one day by immigration enforcement as he was leaving jail, where he had done time to pay for a traffic fine.

“He roundly refused to be deported. He told the immigration official that he wasn’t leaving because he had rights – the right to fight back,” Patricia says. “Even though he was not born here – he felt like he was part of this city.”

Patricia’s struggle for her son continues, but she is not deterred by the challenges they face, or will face, when Trump becomes president.

“We’re not afraid because I have faith that our voices will be heard,” she says. “And if we give up, well that’s what the system wants, to see us give up and not do anything. I’m looking for all the ways I can save my son.”

Those feeling especially vulnerable on the eve of Trump’s inauguration are the youth who were brought to this country as children, and are currently protected by DACA – or Deferred Action for Childhood Arrivals.

Jose Alvarenga came from Honduras ten years ago. He fears for himself and the 700,000 other DACA recipients who gave the Obama administration their personal details when they applied for the program.

“They have all our information,” Alvarenga explains. “We’re the easiest people to go after. We might not be the priority as things stand right now under Obama, but I think once Trump comes in, everything is going to change.”

DACA recipients must meet a list of requirements including enrollment in school or the military and clean criminal records. While qualifying for DACA has granted a temporary protective status to recipients, many now fear their government files may soon expose them and their families to risk.

But Alvarenga says Obama can do something before leaving office: “He can issue a pardon, he can give amnesty, he can get rid of that list. There’s a whole set of things that he can do before he leaves office, and the worst thing that he can do is do nothing, and be complicit in Trump’s massive deportations. Blood will be on his hands because all he will be doing once January comes in is rolling down the carpet for Trump to come in, and handing down the addresses and personal information of almost a million young undocumented people.”

Over a hundred U.S. Congress members have also called on Obama to protect DACA recipients. In the meantime, Alvarenga is organizing school walkouts and marches with BAMN (By Any Means Necessary), an immigrant-rights coalition, and he hopes the movement will gather momentum.

“This is something that everybody should be taking a stand right now,” Alvarenga says. “Like, this is not the time to be paralyzed in fear.”

Activists are calling on their state and local governments to take concrete steps to protect immigrants before Donald Trump takes office.

For Emi MacLean, Los Angeles can take the lead: “Los Angeles, if it’s going to represent its entire population – including its immigrant population – should fight back and make a clear dividing line between local law enforcement and federal immigration enforcement and should make sure that there are resources that are used to defend every individual who is facing deportation and currently detained.”

And some politicians are heeding the call to action. Los Angeles city and county officials have announced plans for a legal defense fund for immigrants at risk of deportation. San Francisco Mayor Ed Lee has expressed support for a similar measure.

The Board of Education in the neighboring Southern California city of Pasadena is voting to designate its schools as safe zones for immigrants.

And at the statewide level, Senate President Kevin de Leon introduced the California Values Act this month that would make safe zones of hospitals and schools across California.