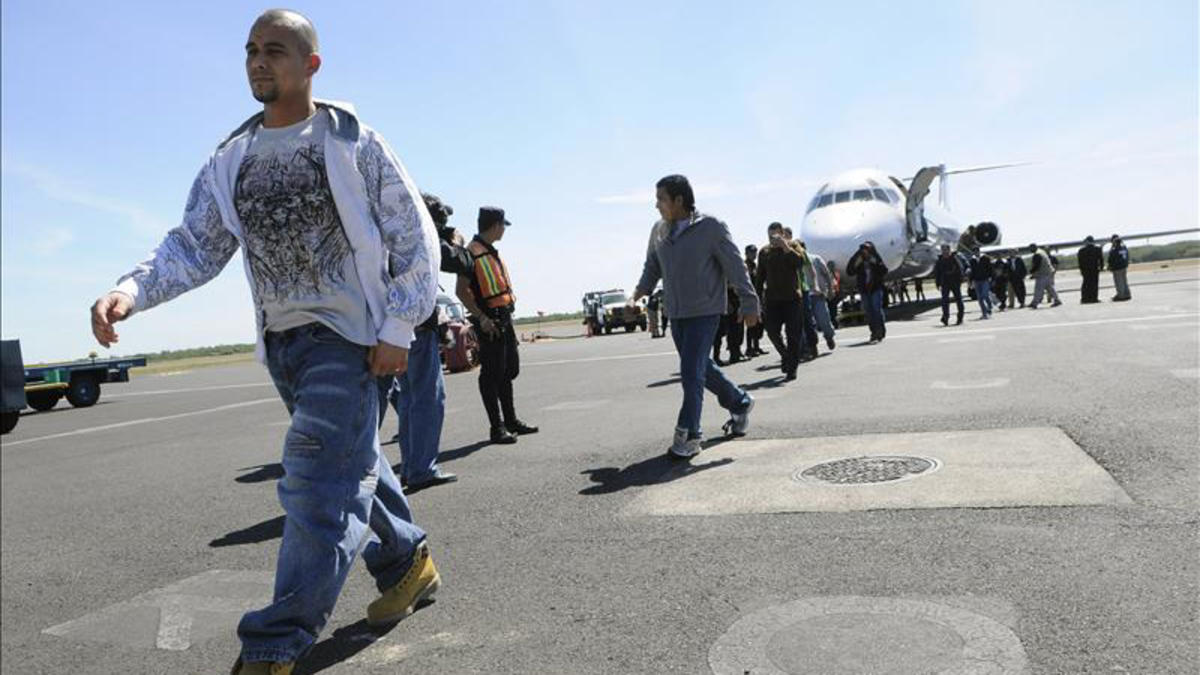 Salvadorans deported by the U.S. government warn of a looming humanitarian crisis in Central American countries as the Trump administration plows ahead with hardline policies towards immigrants. The Salvadoran Congress has approved a special contingency fund to cope with the needs of deportees, but just how much it can help is in doubt given the economy’s dependence on remittances. FSRN’S Ricardo Martínez has more.

Airplanes filled with deportees are a common sight at San Salvador’s international airport and they will likely become much more frequent.

According to the Ministry of Security and Justice of El Salvador, during January and February of this year more than 3,200 Salvadorans were deported from the United States. That’s a 6.6 percent increase over last year’s levels for the same time period. And if President Donald Trump’s rhetoric is any indication, the rate will continue to rise.

Ana Bermudes is a young mother who was arrested last month after leaving work in San Antonio, Texas. Her daughters remained behind in the custody of her undocumented sister. She believes that ramped-up deportations will turn an economic crisis into a humanitarian one.

“How are our families going to get by if they are practically living on the remittances that stabilize the country’s economy?” Bermudes asks. “For example, in my case, I cannot contribute economically to my family anymore and here the families are big and there are no job opportunities. I don’t know what I am going to do. All the people that are being deported have been contributing economically and now what’s that going to cause in the country? A humanitarian crisis! We are already in an economic crisis and then a humanitarian crisis will come, the quality of people’s lives will definitely change.”

An estimated one in four Salvadorans live in the United States. Many have temporary or permanent residence, but most live and work without authorization, which puts them in the crosshairs of Trump’s deportation policy.

For three years, Rafael Hidalgo worked in California’s construction industry to support his family. He was arrested by immigration authorities and immediately deported in late February.

Hidalgo says the deportations cause more than just economic damage: “The separation of parents from their children has a high social cost. Not having parents around at an early age is harmful to a child. It’s also doubly damaging to our economy. The deportees will swell the ranks of the unemployed people in this country. And since there are no job opportunities here, as deportations increase, so will the unemployment rate.”

In addition to high unemployment, El Salvador is dealing with levels of violence unseen since its civil war years. Gangs control poor neighborhoods and forced recruitment has sent thousands of mothers to flee northward with their children. As the Trump administration cracks down on undocumented immigrants already in the U.S., the prospects for obtaining asylum have also diminished.

During the Obama Administration, recent border crossers were prioritized for deportation. Salvadoran immigration agent Francisco Díaz says Trump’s policy is just an expansion of what was already in place.

“What is happening today is a worsening of deportation policies. President Obama was kicking out Salvadoran people one after another. He was deporting 400 to 500 people every month, but what President Trump wants is to send back 400 or 500 people every week or every day. How do we deal with this problem? It’s not easy,” Díaz points out. “This is a real aggravation that will worsen the already troubled economy. The national economy could break down and no emergency aid from the United States will solve the problem.”

El Salvador’s immigration authorities are putting together emergency plans and programs. The nation’s congress has also approved the creation of a special fund to provide legal aid to Salvadorans in the U.S. But many here fear the programs will fall far short of what is needed to cope with the profound effects of deportations in a country where more than a quarter of the population lives abroad.