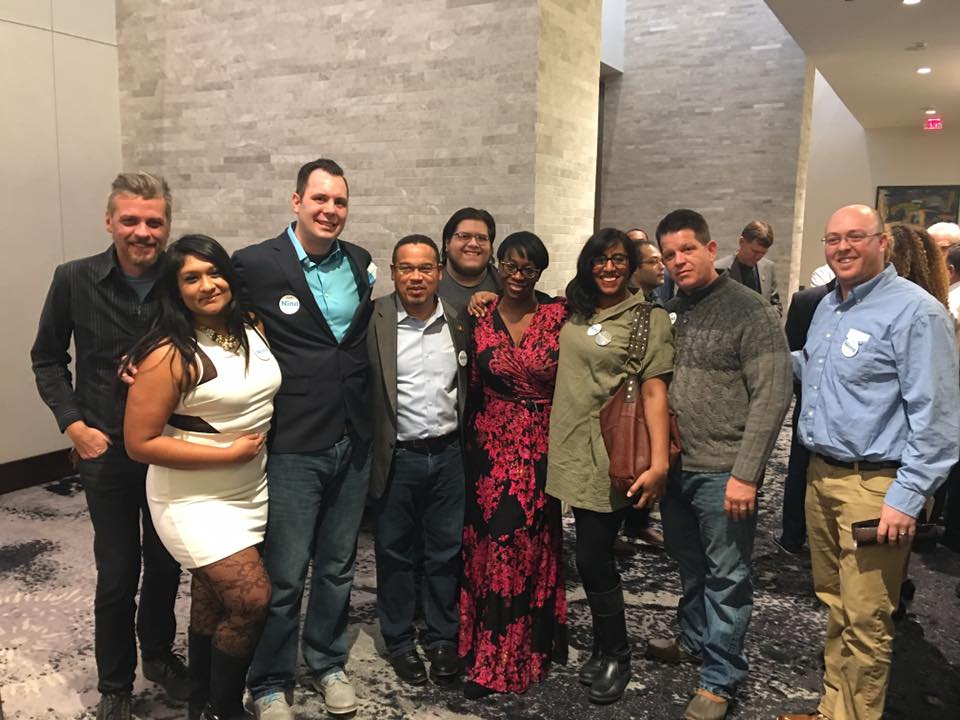 Puja Datta (second from left) is with Our Revolution, a political group which grew out of the Bernie Sanders campaign. (Photo Credit: Puja Datta via FB)

The Electoral College met today at statehouses across the country. The first faithless elector came from Minnesota. Refusing to cast a vote for Hillary Clinton, he was replaced by an alternate and all of the state’s 10 votes were ultimately cast for the Democrat.  Next was in Maine, where one elector cast a vote for Bernie Sanders, rather than Clinton. The vote was ruled out of order, and the elector relented in the second pass. Protesters disrupted the vote in Wisconsin, and were ushered from the room before the state’s electors cast their votes for Donald Trump. And in Texas, two electors didn’t show, two others were ruled ineligible. All four were replaced. And despite one faithless elector who voted for Ohio Governor John Kasich – Texas put Donald Trump over the top of the required 270 votes necessary to capture the presidency of the United States.

As the nation awaits the inauguration, analysts and some Democrats are pondering whether the Democratic Party can regain a competitive edge without significant changes in its leadership and strategy. Evan Davis spoke with activists in Central Ohio who are already working to reform the Democratic Party at the local level.

Ohio lost its status as a swing state in the last election when Donald Trump bested Hillary Clinton by 52 to 43 percent. The failure of the Clinton campaign to rally the Democratic Party base may reflect a feeling among some Democratic voters that their party leadership is simply out of touch with the concerns of its rank and file constituents.

Former Ohio Secretary of State Jennifer Brunner has observed this trend since 2010 when she sought her party’s nomination to run for the U.S. Senate against Republican Rob Portman. The party chose then-Lieutenant Governor Lee Fisher over Brunner, in spite of the fact that early polling suggested that Brunner had a better chance of winning in the general election.

“When I look at the Democratic Party, nationally, they’ve become very establishment in terms of being affected and swayed by big monied interests that typically supported Republicans. We can’t take for granted our base,” Brunner says. “I see some reticence on people’s part to step out – to step outside of what they perceive to be strictures of, sometimes overt and covert leaders of the party. And when they do that, when is the revolution ever going to happen?”

Speaking to the rank and file was the strong suit of the Bernie Sanders campaign, which emphasized making government more accountable to the electorate. After the Democratic primary, the campaign has continued in the form of a citizens lobby called “Our Revolution”.

Puja Datta is one of the spokespeople for the Ohio chapter: “I think the Democrats have this tendency of expecting certain blocks of voters to be their firewalls without really being there for them. I want to get beyond that.”

Datta’s group is forming chapters throughout the state where they plan to field progressive candidates for local offices.

“We are going to be working within the party – the way we are looking at it, the infrastructure is already built for the Democratic Party, and it’s going to take twice as long if we want to build an infrastructure outside of that, so it makes more sense to utilize what we do have,” Datta explains. “We are looking to run people for city councils, for school boards around town. It’s sort of the ‘Brand New Congress’ model, except that, instead of nationally, we’re doing it only in Ohio.”

Others are focusing on a different type of “reform from within” strategy. Will Petric is with a group called Yes We Can. It has a progressive platform and its sights set on gaining seats on the Ohio Democratic Party’s central committee, where Petric now serves as a ward captain.

“We thought what better place to start than at the local level, partly because these wards, in some cases there were less than 600 registered Democrats, some wards had up to 2,000, but it was at a scale where grassroots organizing works,” Petric says.

At a recent party forum in Columbus, all of the candidates spoke of the party’s need to do a better job of listening to constituencies that have been overlooked for several election cycles, as well as to adopt a more progressive stance on issues of concern to the economically disadvantaged.

But transforming those talking points into action will be necessary to recapture the support of people like Dorian Wingard, an urban African-American professional who voted in November, but who chose no candidate in the presidential race: “My ancestors did not fight, die and bleed for me to have the right to waste a vote. They did that so I could have the ability and right to vote. Voting for either one of those candidates would have been a wasted vote, in my opinion.”

Like Datta and Petric’s groups, Wingard plans to remain involved in local politics, but as for supporting Democratic candidates, he remains skeptical.

“I ask the same question about – we’re in Columbus, Ohio, so, we’ve had an African-American mayor for almost 18 years prior to the new-and-coming mayor, and there are parts of this city and community that look the exact same when he took office as they did when he left office, while other areas have bloomed and flourished and grown exponentially,” Wingard points out. “I say that to point to the Democratic Party’s approach; there’s been nothing – there’s been nothing. The approaches and policies, be they Democratic or Republican, yield the same end result, which is deficits in our communities, families that are hungry and not able to do what they need to do, chronic unemployment and underemployment, homelessness, poor quality of education, the list goes on and on and on. So, candidates have to do a little bit more than what they’ve been doing.”

Although some Ohio voters may have been deterred by recent limitations on voting rights, including voter ID requirements, shortened early voting hours, and purges of voter registrations, the undisputedly largest block of voters this past election were neither Democrats nor Republicans, but simply the ones who chose to stay home.