Pussyhat power: craftivists knit together a wearable message ahead of Women’s March 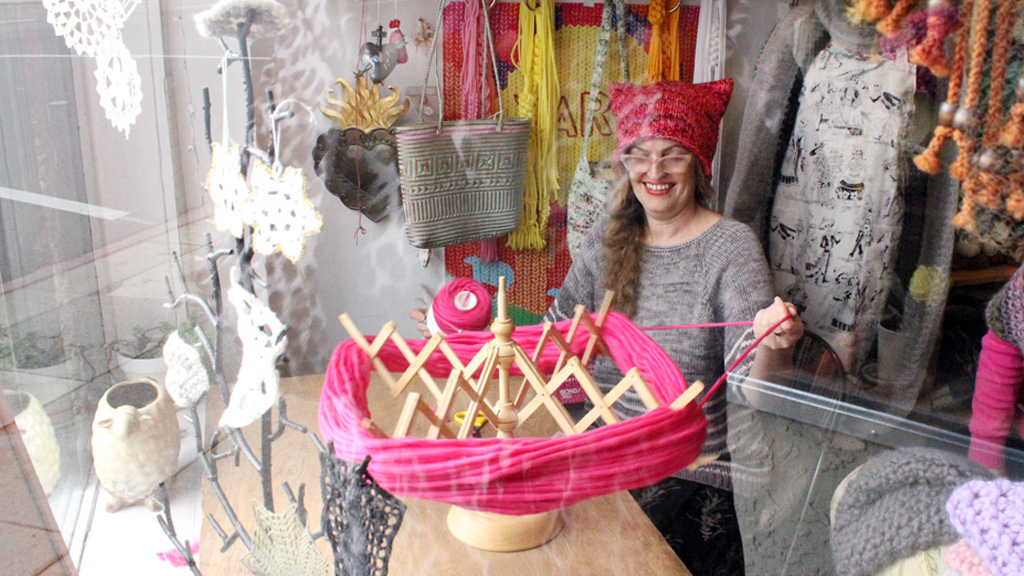 More than 600 protest marches are scheduled for the day after the presidential inauguration. The Women’s March on Washington is expected to be the biggest anti-Trump protest in the country – with 200,000 protesters or more expected to turn out.

Organizers say the events are designed to push back against the rhetoric of the presidential campaign and to show solidarity for the protection of the rights, safety and health for everyone, especially women, immigrants, Muslims, people of color, the LGBTQIA+ community, those with disabilities and more.

Tens of thousands of distinctive pink hats are expected to be on the heads of marchers. FSRN’s Lena Nozizwe reports from the local yarn shop where it all began in Los Angeles.

Pink yarn is everywhere at the Little Knittery, a yarn shop in the trendy Los Angeles neighborhood of Atwater Village. It’s strewn all over a table that slashes down the middle of the store, resting on white shelves, and assembled in boxes on the floor.

Strands of pink yarn dance across the needles of experienced knitters – and move more tentatively in the hands of beginners.

A pink hat in the front display window is a symbol of the fate of much of that yarn. The Little Knittery, an LYS which stands for local yarn shop in knitterspeak, has become Pussyhat Central. It’s also the birthplace of the movement.

“We wanted something really, really simple so that if you were a new knitter, or you decided you wanted to learn how knit, that it would not be too complex,” explains Kat Coyle, the store’s owner and designer of the hat. “I’ve made hats like this for years. It’s a basic pattern where you just have a rectangle, you fold it in half and sew up the sides and then you get little ears. I thought that’s a good idea for this project.”

That project was originally a personal one: to knit a hat to stay warm while witnessing Hillary Clinton’s inauguration. Then came election night.

“After the results of the presidential election, my friend Krista and I were a little shell shocked,” says Jayna Zweiman, who started the project along with Krista Suh. “I called her November 10 and was like, ‘Hey do you want to go the The Little Knittery because this is a wonderful, warm, often very female heavy space and really good conversation and very supportive.’ And it felt like after the election, we were processing the surprise of it. It seemed like a really good idea. So we were talking about it and thought this would be fantastic, this idea of the Pussyhat Project.”

“Normally, typically you would call it a ‘kitty hat’ or a ‘cat hat,’ but considering the circumstances and how the word ‘pussy’ was thrown around, I said let’s call it the ‘Pussy Power Hat,’” Coyle recalls.

Pussyhat Project co-creator Krista Suh says beyond needling Trump for his comments about being able to grab women by their genitals, the feline-eared hats will be a woolly and enduring symbol beyond the Women’s March on Washington.

“I see the hat becoming this enduring symbol of the revolutionary. That you could wear it through all four years of the Trump presidency and beyond, just to the supermarket to show people that you care about women’s rights,” Suh says. “I think it’s going to be a really edgy, powerful thing to wear and that you can give to your grandchild one day it’s like, ‘This is a Pussyhat, it is from 2017 Women’s March.”

So the three women conceived the idea of putting tens of thousands of Pussyhats on the head of every woman taking part in the Women’s March on Washington.

They posted their idea online just before this past Thanksgiving and it took off among the community of so-called ‘craftivists,’ who weave politics into their handiwork.

In addition to a run on pink yarn around the country, celebrities – from Amy Schumer to Patti Smith – have been rocking the rosé chapeau. Social media has kept the thread going from the beginning, documenting everything from works in progress to a photograph of a United States Postal Service truck filled with packages of Pussyhats.

Many knitters, especially those unable to go to D.C. for the demonstration or the sister marches around the country, have crafted hats to donate to marchers. The Pussyhat Project has projected that 100,000 or more hats have been made in homes and knitting shops worldwide

Trish Gossett is a veteran and make up artist who came by The Little Knittery to pick up a donated hat to wear the Washington march. She believes that the knitting shop is the perfect nurturing place for social activism.

Gossett says she will be marching for everything from women’s to LGBT rights. And more than a distinctive memento from what organizers promise will be a historic march, Pussyhat Project participants hope to knit together an enduring revolution in the pink.