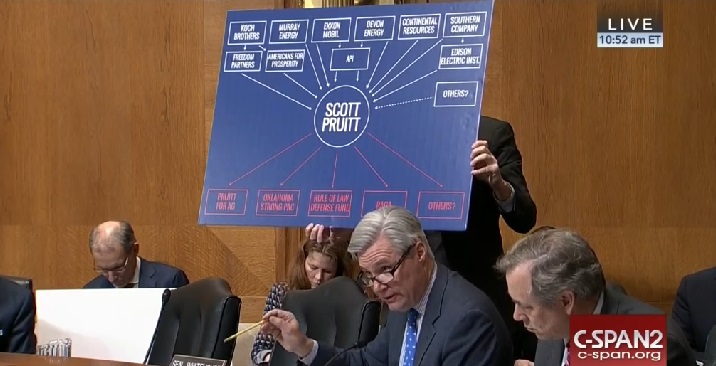 The Senate has scheduled a final vote  on the nomination of Oklahoma Attorney General Scott Pruitt to lead the Environmental Protection Agency…just as a two-year old open records request pertaining to his potential conflicts-of-interest goes to court. Democrats plan to hold an all-night debate session to hold the floor after Senate Republicans refused a request to delay the vote until after Thursday afternoon’s court ruling. FSRN’s Reaux Packard has more.

Flanked by a handful of colleagues, Democratic Senator Sheldon Whitehouse of Rhode Island told reporters that the Senate Republican leadership refused to delay the vote on the confirmation of Scott Pruitt to lead the EPA, calling it an “epic ram job.”

The Senate Democrats wanted to wait until after an Oklahoma judge ruled on an open records lawsuit over emails between the nominee and fossil fuel industry executives.

“And the idea that we are now going to hand the keys to our Environmental Protection Agency to a person so compromised, who has absolutely established himself as the tool and the minion of the fossil fuel industry, is a really disgraceful day for the United States of America,” Whitehouse said.

The open records requests for Pruitt’s emails with fossil fuel industry leaders date back more than two years when the Wisconsin-based Center for media and Democracy first began tracking Pruitt and his multiple lawsuits against in the agency he’s since been tapped to lead.

When the Center for Media and Democracy only received a partial response to their records requests, they filed a lawsuit in an effort to force disclosure ahead of the pending confirmation vote.

“We’re seeking release of emails and other documents from nine public records requests that we’ve filed,” explains CMD Director of Research, Nick Surgey. “But the one that has been getting the most attention is one that we filed 25 months ago which was seeking email communications between Scott Pruitt and a number of coal and gas companies, including Devon Energy, Peabody Energy and Koch Industries. We received just a small number of emails in response; it’s very clear to us that many emails, in fact thousands of emails, have been held back.”

If the judge does order the Oklahoma Attorney General’s office to immediately release the records, the race will be on. Senate Democrats are holding the floor, running down a 30-hour procedural clock ahead of the confirmation vote.

Delaware Senator Tom Carper says he personally asked Senate Majority Leader Mitch McConnell to delay the vote by ten days in order to give time to review the documents, but was told no.

“In my gut, I feel that these emails, the nature of these emails and the entities with whom they were sent and received, will help us understand the truth,” Carper told reporters at a Thursday press conference. “In honor of the truth, we won’t make a mistake, but that opportunity is going to be denied to us. Sometime, a week from now, maybe days from now, we’ll have some idea what the truth is. My fear is that a number of members, especially on the other side, would have been put in a very bad position and asked to vote for a nominee that they otherwise may not have supported, had they known the truth.”

The Senate floor vote on Pruitt is expected to occur at around 1pm Eastern Time Friday. Multiple media outlets are reporting that EPA staff have been told President Trump plans to sign executive orders affecting the agency if and when Pruitt is sworn in.