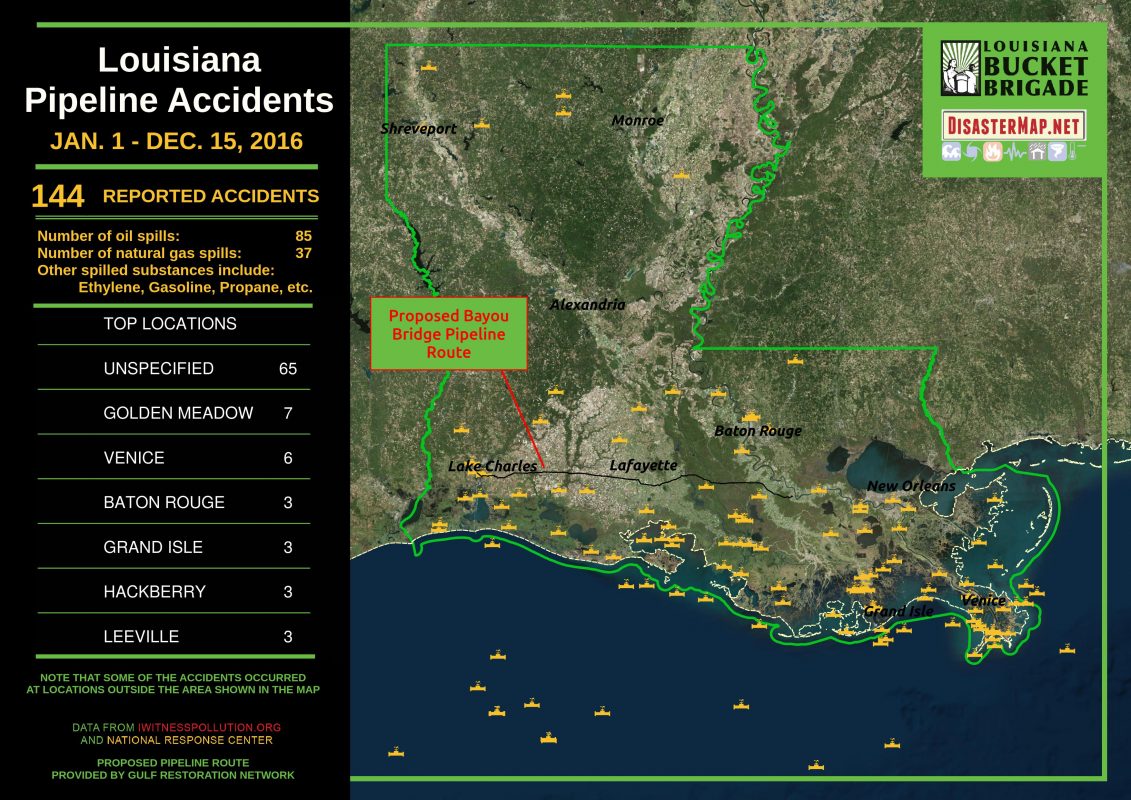 A new pipeline battle is shaping up in the United States – this time in Louisiana. Ahead of a Thursday public hearing on the proposed Bayou Bridge pipeline, environmentalists and corporate accountability activists have compiled a map of all reported pipeline accidents in Louisiana over the past year – more than 140 in all. Shannon Young has more.

Opponents of a pipeline slated to run across southern Louisiana say they can’t afford to bear the human and environmental costs of more fossil fuel infrastructure, citing the frequency of accidents in the state’s existing network of pipelines. They point to the 144 pipeline accidents reported to federal authorities in 2016. Anne Rolfes of the Louisiana Bucket Brigade says nearly half of those accidents are attributable to holes, corrosion and a general lack of maintenance of the infrastructure.

“Louisiana has a catastrophic pipeline infrastructure already. The regulatory agencies are not able to adequately regulate our current pipeline network,” Rolfes explains. “And so, there should be no permitting of new pipelines.”

The Louisiana Bucket Brigade, an NGO watchdog of the petrochemical industry in the state, has just released its latest so-called Disaster Map of pipeline accidents based on reports filed with the federal government’s National Response Center. Rolfes says she worries that this type of public information may become more difficult to obtain under the incoming Trump administration.

The fossil fuel industry is a significant player in Louisiana’s economy and many calls for increased regulation of it are met with arguments that stricter enforcement could be a job killer. But Renate Heurich of 350 Louisiana says the flood-prone state could create employment opportunities by investing in renewable alternatives.

“In Louisiana, in the Gulf, we have adequate wind to build wind farms, just like it was done in Rhode Island,” Heurich points out. “We have the work force that would be capable of building the platforms for those wind turbines. So we’re not even talking about cutting jobs. There are jobs out there that could be created.”

The release of the new report detailing last year’s more than 140 pipeline accidents in Louisiana comes just two days ahead of the public meeting on the proposed Bayou Bridge pipeline. LBB’s Rolfes says these meetings are usually procedural affairs, but that locals now are energized by the example of opposition to the Dakota Access pipeline.

“You know, in my experience, these public hearings are something done just to satisfy some angry people and they don’t consider the comments at all and just go ahead and do what they want,” says Rolfes. “In this case, they can ignore the comments if they want and permit this pipeline. I can promise you they will have a real fight on their hands. It’s pretty interesting the way that this part of the world has been awakened because of what’s happened in North Dakota and the fight over that pipeline.”