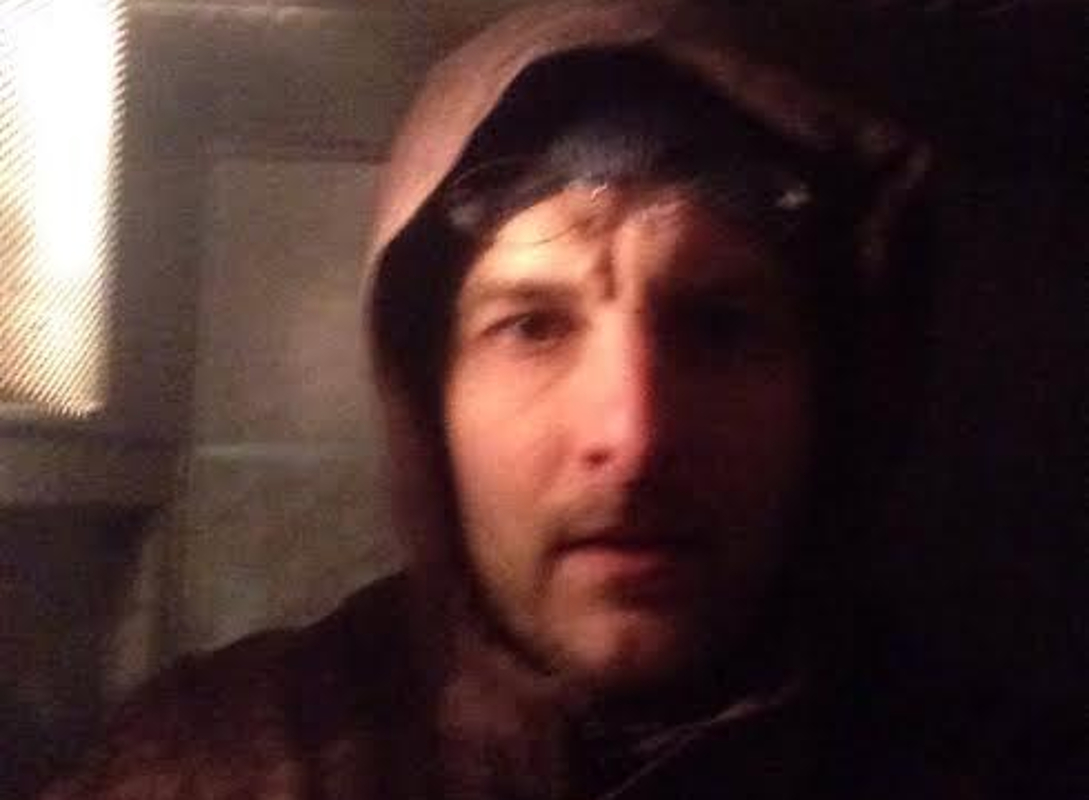 Filip Warwick took this photo of himself after police stuffed him inside of a metal cage within a police van.

FSRN reporter Filip Warwick had an unexpectedly close encounter with an authoritarian clampdown on civil society in Belarus over the weekend. He was in the capitol, Minsk, taking advantage of a recent easing of visa restrictions to finally see one of the few countries in Eastern Europe he had never visited. His trip coincided with a local protest of a so-called ‘social parasite’ tax, that would penalize citizens without full time jobs.

Riot police cracked down on protesters,  and swept up unaffiliated civilians. Warwick, who was not on assignment, was arrested, physically assaulted, denied contact with British Embassy officials and then fingerprinted and photographed before being let go. Shannon Young spoke with him about his experience.

Many vestiges of Soviet rule remain alive in Belarus, from architecture to café society to networks of informants propping up an authoritarian regime. That’s the feeling that stuck with FSRN contributor Filip Warwick after his first visit to Minsk.

Warwick was taking advantage of a new visa program that allows visitors flying in to Minsk to stay for five days without having to go through a bureaucratic visa application process. Until now, the country had remained behind its own post-Soviet iron curtain. Since 1994, President Alexander Lukashenko has been at the helm of the government that some refer to as Europe’s last dictatorship.

However, civil society does try to participate in the direction of the country. And that includes holding demonstrations when policies are particularly controversial, like the proposal dubbed the ‘social parasite’ tax on unemployment.

“Over the past week, there have been hundreds of Belarusians protesting and consequently arrested and charged and fined and jailed for participating in a protest – illegal protest, what the government is calling illegal protest, unsanctioned protest,” Warwick explains. “And these protests were against the introduction of a new tax that obliges Belarusians to pay the equivalent of $250 in tax if they had worked half a year. So, basically they’re asking for unemployed people to pay a tax of $250 for work that they had not done.”

Warwick says he knew of the protests in general and that he encountered one while walking around the city center near his hostel. It was a coincidence, he says, and he left the area when the riot police began to cordon it off.

“At one moment, the OMON, which are the infamous and notorious riot police, organized two cordons, so basically they blocked in the protesters. And I happened to find myself in the midst of that, so I tried to get away from the crowd on the side street, and there were three or four photographers standing next to me, observing the situation from the side. At one moment the OMON riot police opened up – the cordon opened up – and a number of photojournalists and journalists ran through and I ran behind them. That’s when I decided to leave the area and actually make my way back to my place of stay,” Warwick recounts. “But on the way, as I was walking away from the protest, I could hear, in the distance, people being – basically, I could hear screams. There’s a kind of scream when you hear people are in distress – uh, not in distress but they are trying to run for their lives or try to get out of a place from whatever means possible. But in the distance, in the far, far distance, I could see the riot police already engaged and grabbing – I cannot confirm that these were protesters or simply people who happened to be in the city center when the protests were taking place, but I could see the basically grabbing people, detaining people and throwing them into these large trucks for detainees.”

But the riot police fanned out from the protest area and began arresting people at random in the city center. That’s when Filip was thrown feet first into a police van.

“Over the six hours, I asked the staff 10 to 15 times to contact the UK embassy, but that request was denied. Halfway through my detention, I was then violently picked up, my arms were twisted, I was then flipped upside down, thrown onto the ground,” Warwick recalls. “One of the police officers – one of the men who had been physically manhandling me – he was in plain clothes, he was not in uniform – he pressed his knee against my back. That caused great pain onto my spine. As a result of him applying pressure onto my back, this caused great pressure onto my rib cage. I was unable to breathe for a couple of seconds and this, for some reason, brought about some considerable laughter from the police staff and from the men.”

He was one of around 400 people arrested in Minsk Saturday, March 25. At point, as police and a plainclothes authority manhandled him, a fellow detainee whispered a message to Filip in English: “When I was being kicked by a police officer – and there was also the kick that made me fall to the ground – he actually whispered in English to basically keep quiet and to follow their orders and, upon my release, to tell the world what is happening in Belarus and the situation with civil society and how human rights are abused.”

Filip was fingerprinted and photographed, but not charged with anything, before he was let go. Once back in Kiev, where he’s based, he went public with his story. He says he’s been moved by support from friends and colleagues, and by messages from people in Belarus.

“Of course, they know what the regime is capable is doing and the appalling actions – Belarusians have experienced them upon themselves and they were appalled to see that something like that could happen to a foreigner, to an EU national, and someone basically visiting the country. Most of all, their greatest hope is trying to get the message across,” says Warwick. “This is something that is followed very closely in neighboring countries, but doesn’t get too much attention if we’re looking at the EU as a whole, and especially western Europe – as in the UK, Germany, France and then abroad in western societies. And they want to bring the world’s attention, especially European attention and European Union attention, in terms of the human rights abuses, what is happening there on a daily basis and on a weekly basis, and that, in the 21st century, why such actions are still taking place and why certain governments are turning a blind eye to human rights abuses that are committed by the Lukashenko in Belarus.”

Warwick has contacted multiple press freedom organizations to tell the story of what he experienced and witnessed while in the capital of Belarus.