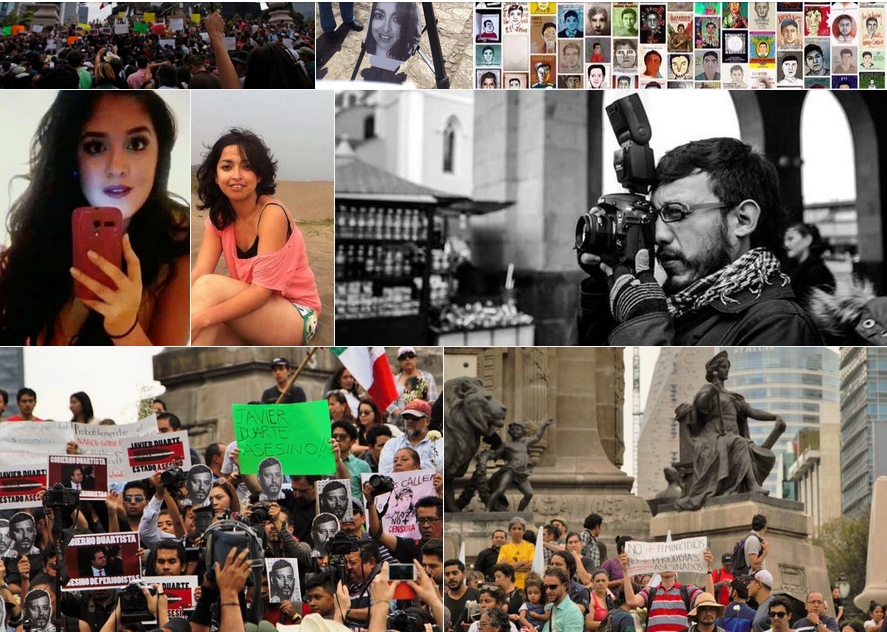 Yesenia Quiroz, Nadia Vera and Rubén Espinosa were among five people killed in a Mexico City apartment July 31, 2015. (Screenshot of #JusticiaParaLxs5 via Twitter)

Yet another journalist has been murdered in Mexico – but this time the crime occurred in what is known as the country’s safe haven. Shannon Young has more.

Photojournalist Rubén Espinosa was found dead in a Mexico City apartment Friday night, but he wasn’t alone. Four other people – all women – were also murdered in the same way, with execution-style gunshots to the head.

Espinosa had moved to Mexico City in June, fleeing a climate of fear in the Gulf Coast state of Veracruz, by far Mexico’s deadliest region for media workers.

In an interview last month on Rompeviento TV, Espinosa explained that he decided to leave Xalapa, the capital city of Veracruz, after men in plainclothes made it clear that they were watching him outside of his home. The conspicuous surveillance coincided with a particularly brutal machete attack targeting student activists at the state university, a story Espinosa documented as a reporter who routinely covered social movements.

“The harassment against the press in Veracruz is an ongoing thing and it’s an everyday thing,” notes Ricardo Gonzalez of the Mexico office of Article 19, an international press freedom and transparency organization. He says this particular case marks a watershed moment because, “Mexico City has been well known among the journalist community and human rights defenders community as a safe haven. And, all of a sudden, this is the first case in which a person that has fled the violence from different regions in Mexico, seeking some sort of security in Mexico City, was actually attacked in the city.”

But Espinosa wasn’t the only exile from Veracruz murdered in Mexico City Friday.

Nadia Vera, an anthropologist and student activist, was also among the victims. She had fled Xalapa due to incidents that made her fear for her life, including a break-in at her a former apartment which she believed was politically-motivated. After relocating to Mexico City, she remained outspoken about the situation in Veracruz.

“We started to get very worried when the rate of disappearances spiked in 2010 after Duarte took power as governor,” said Vera in an interview with Rompeviento TV from last November. “The violence spread and we began to realize that we were the product they were after. I say product in the sense that, as a woman, they’ll grab you for sex trafficking. They’ll recruit students to become hired killers. And those of us who are in the way are considered a problem by both the government and the narcos. So we’re trapped between two fronts and their use of repression through legal and illegal means.”

Eighteen year-old Yesenia Quiroz is the third victim identified from the multi-homicide. Two others remain unnamed at this time. Media reports indicate three of the women were roommates and a fourth was a housekeeper.

In a weekend press conference, Mexico City attorney general Rodolfo Ríos Garza said all lines of investigation are open, including the motive of robbery. Rios Garza did not mention that at least two of the victims had left Veracruz due to fear.

News of the multi-homicide triggered demonstrations by journalists and human rights activists in Mexico City, Oaxaca City, and in Xalapa, but the scope of the crime has shaken people beyond the victims’ professional and social circles.

“The fact that five persons were found dead in a relatively calm and safe neighborhood in Mexico City is actually shocking news for the common citizens,” says Gonzalez of Article 19. “And now, add to that the fact that they were facing threats from the government of Veracruz. That’s also shocking because that’s the first time we see that kind of violence here in Mexico City. People were under the assumption that Mexico City, despite the many problems that it has, it was actually a safe city. And now, the reality is catching up with us.”

Rubén Espinosa is the 13th journalist from Veracruz murdered during Governor Javier Duarte’s administration. He’s the second killed outside of Veracruz this year, after the murder of Armando Saldaña in Cosolapa, Oaxaca in May. Three other journalists in the state are disappeared.

It’s now up to Mexico City authorities to either take into account the documented harassment targeting at least two of the victims as a line of investigation or to continue with the established practice of chalking up the murders of journalists and activists to random acts of crime.