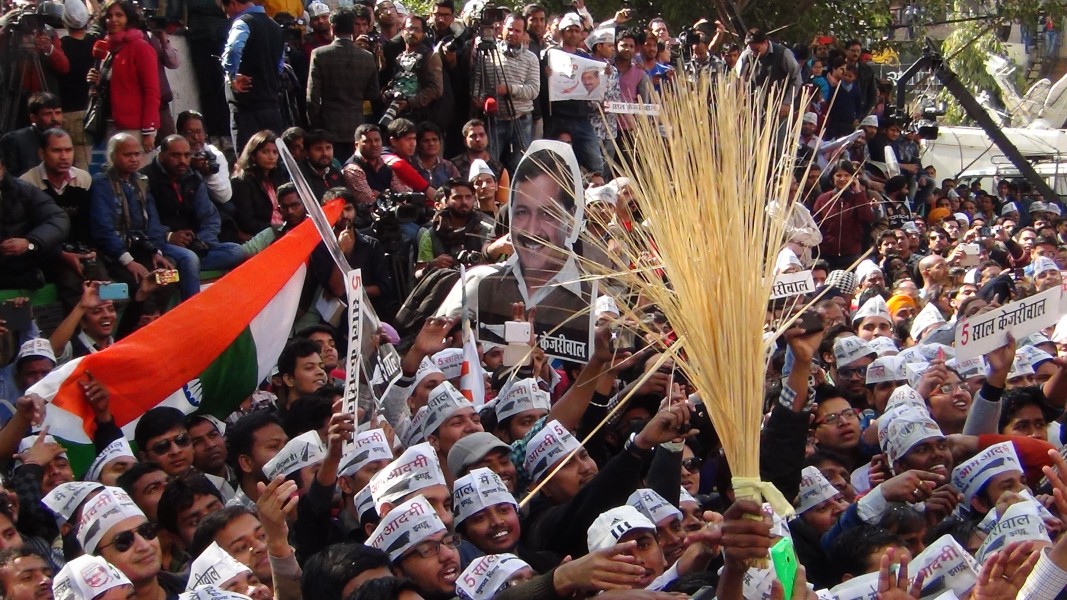 The Aam Aadmi – or “Common Man’s” – Party has won a landslide victory in Delhi Assembly Elections. Political analysts say the sharp left turn in the state which includes India’s capital is a major blow to Prime Minister Modi and his party, the hardline Hindu nationalist BJP. The results announced Tuesday give the Aam Aadmi an overwhelming majority in the Delhi Assembly and put the government of the state at ideological odds with those at the helm of the national government. Bismillah Geelani has the details.

Hundreds of supporters sing and dance outside the Aam Aadmi Party – or AAP – office in New Delhi to celebrate the final results of the Delhi Assembly election. The AAP – which uses a broom to symbolize its anti-corruption platform – has literally swept the elections, winning 67 of the 70 state assembly seats.

The AAP emerged out of the nationwide anti-corruption movement led by Anna Hazare in 2012. The party’s leader is Arvind Kejrival, a close associate of Hazare.

Kejrival won his first election to the Delhi Assembly in 2013 with a pledge to clean up politics. He went on to become the Chief Minister of Delhi, the de-facto head of the government of the state which includes the national capital.

In his first week in office, Kejriwal fulfilled his two main elections promises: to provide the population people with free drinking water and to cut electricity rates by 50 percent.

When the political opposition blocked Kejriwal’s attempt to introduce an anti-corruption bill, the  AAP-led state government resigned after only 49 days in power.

The mass resignation forced a new election. It was this election that delivered near-total control of the Delhi Assembly to the AAP.

“Arvind Kejrival is a man of action,” said 20-year-old first-time voter during Tuesday’s victory party outside the AAP office. “He did in 49 days what no political party has ever done. So he deserved a second chance. Modi also won a majority in general elections but in 9 months of his rule he has only made speeches and promises. And today people have rejected him.”

The anti-corruption party says Tuesday’s victory will allow it to implement its policy priorities without hindrances and undue delays.

The elections results are seen as the first major setback to Prime Minister Narendra Modi and his Bharatiya Janata Party, which has won a series of state elections after taking power of the central government last year.

The BJP has won just 3 seats while the Congress Party that ruled Delhi for 15 consecutive years until 2013 elections, has been virtually wiped out.