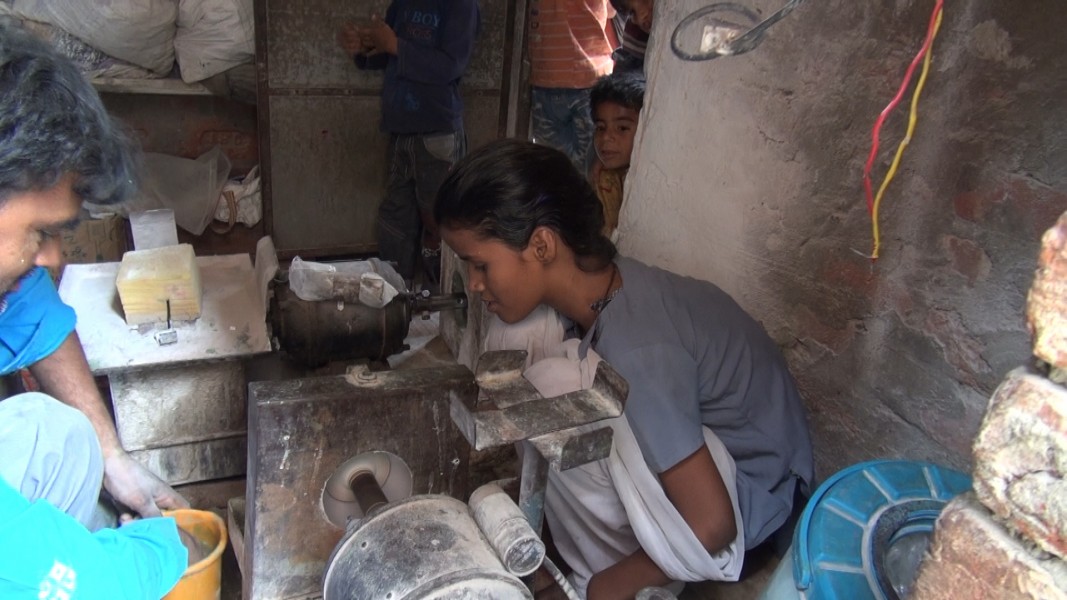 India’s cabinet is considering amending the country’s child labor law to allow children younger than 14 to work in their family businesses and farms after school hours and during holidays.  To take effect, the amendments must be approved by the Indian Parliament. UNICEF estimates that India has the highest number of child workers in the world where more than 12 million children work, many of them in hazardous occupations where hours are long and pay is minimal. Jasvinder Sehgal visits a rural household in the western state of Rajasthan where 10 percent of the workers are minors.

Three young Indian girls work in front of a hot furnace which melts the raw material for making bangles. In this work environment, they often handle poisonous chemicals and inhale noxious fumes.

Seven-year-old Aisha is the youngest. She says she and her two sisters and a brother work at the family shop. She also says burns are common due to the heat and sometimes irritants fly into their eyes. The eldest, Shazia, is 12 years old and says that many of her friends work at home to help their parents.

“Embroidery, cloth dying, gem polishing, kite and jewelry making are the jobs my friends do,” she says, listing off some of the jobs of her friends. “Many of these tasks are dangerous for their health but their parents make them to do it. Children are not interested in working but their parents force them to do so even at the expense of their studies. It adds to the family income but also harms the children’s future.”

When asked to comment on allowing her children to perform risky work, the girls’ mother, Salma Khan is defensive

“Why are you worried about my children?” she asks. “These are my children and if they earn for the family, why are you upset? I send them to school every day and if they work in their free time, what’s the issue? Didn’t your Prime Minister Modi use to sell tea in his childhood? Now when our Government is ready to relax the law then what’s your problem?”

A proposed amendment to India’s Child Labour Prohibition Act would allow children under 14 to work in family businesses. Child advocates say the major problem with the proposed amendment is that it does not differentiate between hazardous and non-hazardous jobs.

“The new law would make it easier to categorize all child labor tasks under the family enterprise label,” says Vijay Goel of the One Stop Crisis Management Center for Children, an NGO that works for the rights of children. In the last two years, Goel has rescued over 2300 child laborers from various hazardous work places. “It will severely violate children’s right to an education. Fourteen to 18-year-olds would be free to do non-hazardous work, but it will be extremely difficult to differentiate between hazardous and non-hazardous work. For example, a child is allowed to work in his ancestral agriculture farm which is classified as a non-hazardous work. But what happens if he gets injured by farm equipment like axes or spades?”

“There are various such examples and today even if you take the entertainment industry or you take any of the children programs, there are a lot of children under the age of 14 who have immense talent and which needs to be applauded as well,” points out Shaina NC, a spokesperson of India’s ruling Bhartiya Janata Party. “I think they are very clear that there are hazardous jobs for children and there are non-hazardous, which are to be monitored by the parents.”

While the Indian Government says that the new amendment is in tune with the country’s socio-economic conditions, activists say the biggest beneficiaries will be the informal manufacturing industry that thrives on cheap labor.

“This is a very sad day, a very sad day for the children of our country,” laments Shanta Sinha, the former chairperson of the commission for the protection of child rights. “We thought that the amendment in the child labor act will actually end child labor but it seems that it will legalize child labor through back door by allowing children to work at home. But then this kind of help, I think is no kind of help to the family. If the children were all in school, their families would have been better off.”

Just last year, the U.S. Department of Labor added India to it’s list of countries where child labor is prevalent, listing 23 goods produced by underage workers in the country’s manufacturing and agriculture  sector.

The proposed amendment expanding conditions under which children are allowed to work in India will be presented to the lower house of parliament in the coming months.