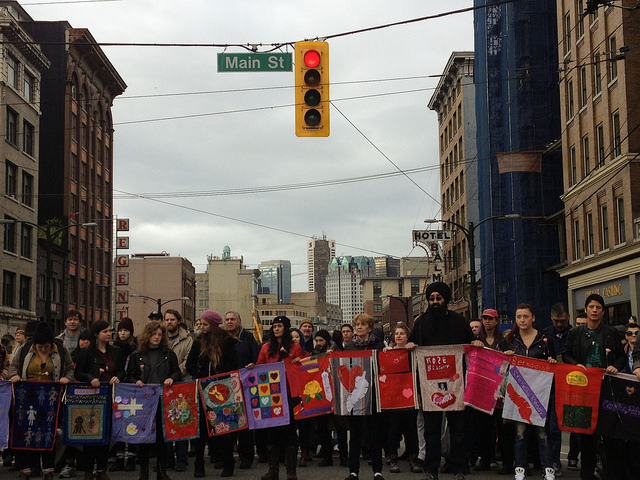 For some in Canada, Valentine’s Day was one of somber remembrance and calls for change. Over the last couple decades, several thousand women have disappeared or been killed and a disproportionate number of those women were indigenous. Participants in the 23rd Annual Women’s Memorial march spoke about the personal effect these disappearances and killings have had on them and about the need for communal and governmental change. Stéfanie Clermont reports.

On Valentine’s Day, people in cities across Canada held marches to honor the lives of missing and murdered women. Over 3000 women have disappeared or been killed in Canada since the 1970s. A disproportionately high number of them were indigenous. This year marked the 23rd Annual Women’s Memorial March, which originated in Vancouver, British Columbia in response to the growing number of missing and murdered women, most of them indigenous or poor. On Friday, about 1000 people gathered in the Vancouver low-income neighborhood known as the Downtown Eastside, and marched through the streets of the city to call for an end to the violence that vulnerable women in the area and elsewhere face on a daily basis. Lorelei Williams from Skatin Nation shared the story of her disappeared aunt.

“My auntie Belinda Williams, who I closely resemble, went missing around 1978. She disappeared without a trace. She’s still missing today. Violence has affected my family directly. And I don’t want another woman to go missing or be murdered. They are someone’s cousin, mother, daughter, grandchild or grandmother. We form family circles. And when the circle is broken, it takes a really long time to mend. All my relations.”

Priscilla Mays spoke of how violence against indigenous women has affected her family.

“My native name is … from my grandmother. We grew up on our reserve, Wet’suwet’en. My late sisters were murdered. One of them was murdered and left for dead in a closet for about a week.”

She thanked the crowd for coming out in such high numbers.

Elder Paula Johnson gave a speech in which she pointed out police complicity with the exploitation of women in the drug trade.

Johnson invited indigenous women to heal from intergenerational trauma in traditional ways rather than with drug-use.

“You know there’s many sweat lodges around. That you guys can come and show that our native women stand strong. Our men will follow. I know there’s many recovering addicts that are scared to go to elders. But elders love you. Come to the sweat lodge. That’s where you’re going to heal. Not with that crack pipe. Not with that needle. Quit killing yourself. Then we won’t give this society a chance to kill you.”

Mona Woodward is one of the organizers of the Vancouver women’s march.

“My name is Mona Woodward, I’m the executive director of Aboriginal Front Door Society. I am Cree, Lakota and Saulteux from Slekwatuh, Saskatchewan.”

Thank you. Can you tell me about your role organizing the memorial march?

“I am one one many women and organizations that come together way before the march starts, months before, and we do planning and organizing around what we need to do to make it happen and that includes a task list that gets different people to perform tasks to ensure that the march is a success every year.”

What motivated you to be a part of the organizing?

“The injustice of missing and murdered aboriginal women and girls. That society doesn’t value an aboriginal woman. And that there are so many systemic failures to address the issue that allowed it to go on for so long. And now things are changing. It’s a new day, it’s a new movement that has happened and we’re finally getting recognized.”

What has been the government’s action on this issue, what has been its response to the activism?

Can you talk about the role of the police?

“The police have to uphold the law in regards to violence against women. When you look at some of the issues that have come from SisterWatch at the community level, there are different issues that have been addressed, but we have a long ways to go.”

Sisterwatch is a Vancouver Police Department program that includes a crime hotline, town hall meetings and rewards for information about violence against women.

What has been the reaction of the federal government on this issue?

A missing women’s commission of Inquiry was established in British Columbia in 2010 to look at the trend of missing and murdered women and at how missing women’s cases are treated by police. It was led by former judge Wally Opal. Not everyone was satisfied with the inquiry, which some say excluded the voices of grassroots women’s groups. No equivalent exists at the federal level, even though the problem exists Canada-wide. A petition of 23,000 signatures asking the government to hold a national public inquiry was recently delivered to the federal government in Ottawa.

For somebody who might be hearing about this for the first time, can you talk about the roots of the problems are, why is this happening?

“The bigger picture is the impact of colonization. The impact of the indian residential schools. It’s intergenerational trauma that’s happened. And when we look at the population of the downtown eastside–the overall population of Vancouver is 7% aboriginal–and here, it’s primarily aboriginal people who are impacted by whether it’s indian residential schools, child apprehension, diabetes, HIV/AIDS infections, and mental health issues. And those are some of the social impacts of colonization.”

Mona, like many activists who do work on this issue, is pointing out that violent offenders tend to prey on a society’s most vulnerable members; those they can most easily hurt without facing repercussions; those who are not considered valuable by police and mainstream society.

Mona and her peers are now looking to enforce the BC missing women’s inquiry’s recommendations, which includes compensation for the families of the victims. they recently met with BC minister of justice Suzanne Anton. They have received the support of Vancouver mayor Gregor Robertson, who agreed to bring the advocates’ concerns to British Columbia’s premier. 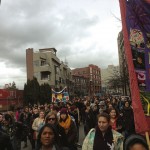 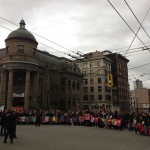 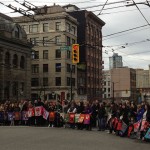 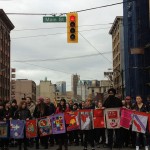 Special Thanks to Doug West and pictures by Felipe Magalhães