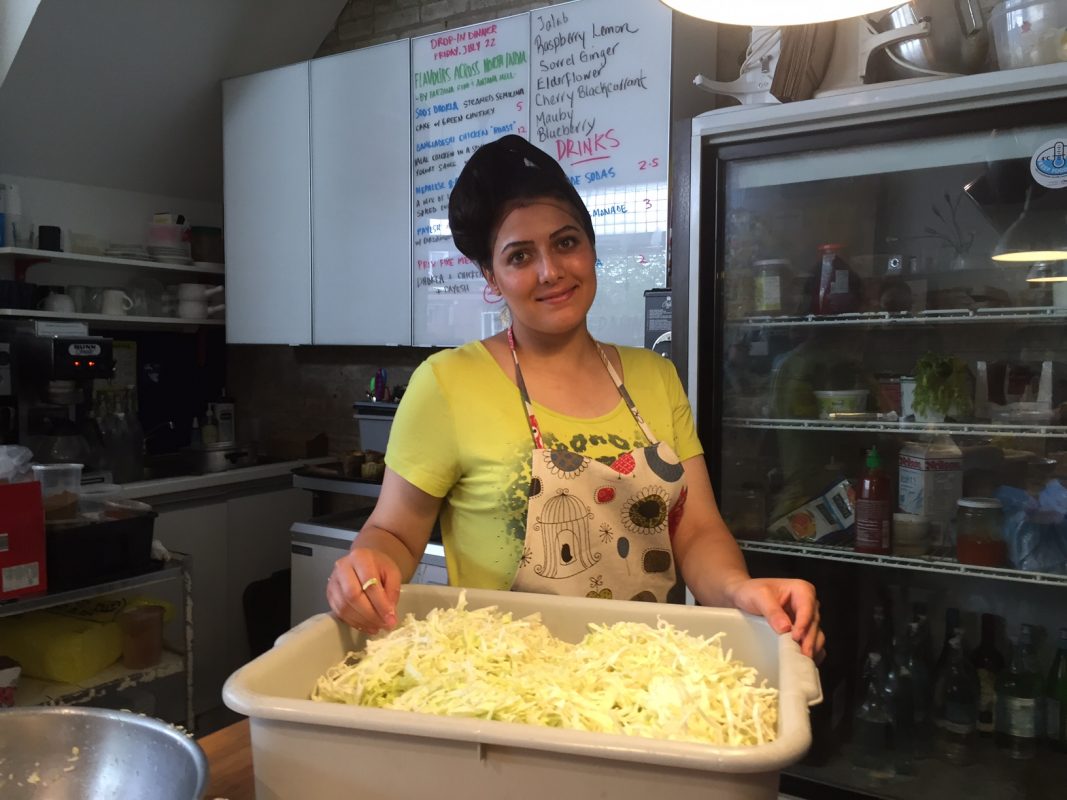 Amnesty International issued a scathing report today on the state of the global refugee crisis, calling the recent UN summit on refugees a spectacular failure and criticizing most of the world’s wealthiest nations for doing the least to address the needs of 21 million refugees worldwide.

The report, titled “Tackling the Global Refugee Crisis: From Shirking to Sharing Responsibility,” does name two countries that have stepped up to the call: Germany and Canada.

In December 2015, Canada opened its doors to 25,000 Syrian refugees fleeing civil war. Across the country families arrived from the Middle East to start a new life. The welcome, led by newly elected Prime Minister Justin Trudeau and his Liberal Party, became a nationwide effort with Canadians from coast to coast opening their hearts, homes and kitchens. Tanya Castle reports.

Asma Al Hariri chops zucchini in a downtown Toronto kitchen. She is one of a dozen Syrian women preparing tonight’s Newcomer Kitchen meal. The dish: Sheikh El Mahshi Bil Laban, a traditional Levantine recipe consisting of zucchini stuffed with beef, cooked in a yogurt sauce thickened with eggs and seasoned with garlic and mint, accompanied by Egyptian rice.

Restaurant and culinary incubator The Depanneur hosts the Newcomer Kitchen. The initiative started out as a space for Syrian women to prepare home-cooked meals for their families while they were stuck in hotels upon arrival in Toronto and has since grown into a weekly take-out restaurant.

Asma has been participating in the project for more than three months and says, “I love cooking and I love to share and participate in this project because I want to be in touch with the Canadian people and with the Syrian people also in my community.”

Each Thursday morning the Syrian women arrive, sometimes with children in tow, at The Depanneur to cook 50 pre-ordered meals for customers around Toronto.

The women range in age from 25 to 72 and come from every corner of Syria. Some know each other from their early days in hotels and some are meeting for the first time, but they all share similar goals: to make delicious meals, earn some cash and build a life in Toronto.

Asma says knowing how to speak English helped her transition to life in Canada, but that she’s still adjusting.

“It’s a new culture, new style of life, new country, so that’s the big challenge for me, to be accustomed to the traditions, to the customs of the Canadians, to the way of life,” says Asma. “The big, big, big challenge is finding a job here. For us as newcomers, it’s a big challenge to find a job.”

Although the Newcomer Kitchen was not started as an income-generating project, it does provide pocket money to the women. Each participant leaves with around $75 for a day’s work and can also take home leftovers for their families.

“The social benefit of all of them coming together and interacting and cooking, they’re incredibly proud, they’re incredibly capable, they’re eager to show what they can do and to share what they love about their culture with the Canadian community,” The Depanneur’s owner, Len Senater, says the real value of the Newcomer Kitchen goes beyond the weekly token payment. “The fact that we can do something that generates a transaction – an equitable transaction – something of mutual benefit, that they can create something of true value, and the people are happy and willing to pay for it, creates a really dignified exchange, and that I think is really the foundation of an amazing type of interaction. It’s not charity, they’ve earned this money through hard work and they’re getting something for it in return, and the people are getting an amazing meal and everyone goes away happy.”

Additional revenue comes from locals – like Dawn Scarrow – who pay to attend the week’s cooking session to learn how to prepare Syrian cuisine.

“It’s such a good idea, it’s just such a good idea for everybody to participate and for people in Toronto to get to taste it. Why not? And what an amazing opportunity, the price is right, the food is fantastic, everybody gets something out of it.”

The project got off its feet thanks to Rahaf Alakbani and her husband Esmaeel Aboufakher, a young Syrian couple who came to Canada as refugees earlier this year. The couple met Len at a fundraiser and drew on their interpreting and social work backgrounds to connect a handful of refugee women with the kitchen space.

Now the couple coordinates more than 50 women in the greater Toronto area who regularly participate in the project. Rahaf says it’s a lot of work but worth it to see the women so happy.

“Actually, they say that they are very happy by this project, and always, always: ‘I want to come, please,’ Rahaf says. “They always call me and my husband and say, ‘When can we come again, because they had fun,’ and they got the benefit financially and they want to support their families. They always: ‘Please don’t forget me. I’m on the waiting list.’”

Singing classics by famed Lebanese songstress Fairouz, it’s clear the women are enjoying their work and having fun at the Newcomer Kitchen.

In an attempt to establish a standalone kitchen with salaried positions, Len Senater has launched a FundRazr campaign and applied for charity status. He says the Newcomer Kitchen model can be successfully applied in other cities resettling refugees.

This dream is shared by many of the women involved, including Rahaf: “I see that the Newcomer Kitchen will grow up and be a big – a huge project – and maybe there will be a copy over the world like what Len did, because it’s a good idea.”

With the support of Toronto’s mayor and many immigration organizations in the city, it shouldn’t be long until more Torontonians are enjoying home-cooked Syrian cuisine.