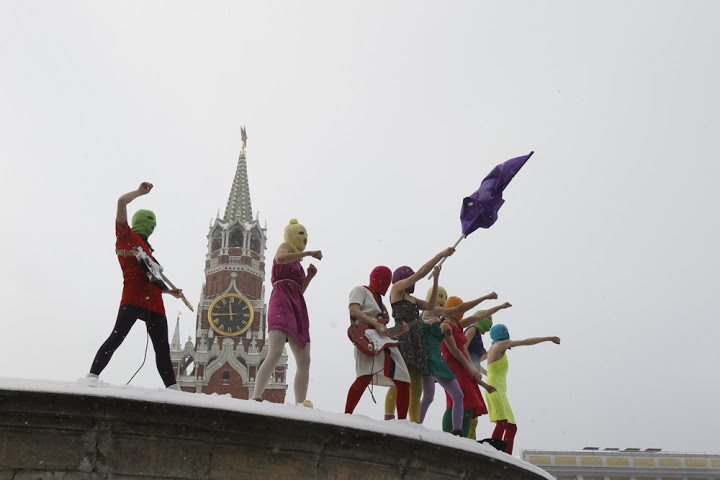 Russian police detained five members of the punk group Pussy Riot today in Sochi on suspicion of theft. The band denies the allegations and says they were beaten while in custody. Ekaterina Danilova reports.

Pussy Riot came to Sochi for several performances while filming a video for their new song called “Putin Will Teach You to Love the Motherland.” The song is about suppression of freedoms in Russia and corruption surrounding the Olympics.

Tank is one of the group members who were detained today. She said the song honors anti-Putin protesters that face 6 years in prison, and an environmentalist in Sochi who protested against environmental destruction caused by the Olympic construction.

“It’s about Evgeny Vitishko, who TODAY was sent to a penal colony for three years for writing on a fence. And of course about the holding of the Olympics, which looks like a huge convention of every possible Russian security service in one city. They’re standing every 10 or 15 meters on the street, and it’s all on the backdrop of having spent $50 billion on the Olympics.”

Tank says the group has been in in Sochi for less than 3 days, and has already been detained by police and security services three times and held for around 30 hours in police stations on what they say are made up charges.

“All these reasons were really absolutely absurd, and all the detentions were aimed to prevent us from performing and recording the project that we came here for, and not to stop something illegal.”

The group says that before their attorney arrived, police used force to try to get them to talk. They were later released from custody, and two members went to the hospital to document their injuries.

Pussy Riot plans to stay in Sochi until they finish their project. Ekaterina Danilova, FSRN, Russia.