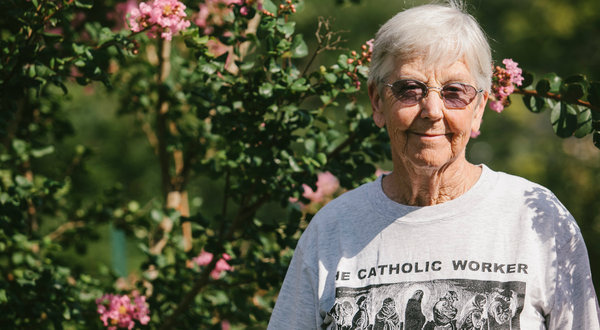 An 84-year old nun asked a U.S. District judge to show her no leniency at a sentencing hearing Tuesday in Tennessee. But counter to her wish to serve her fellow prisoners for the rest of life, the judge sentenced Sister Megan Rice to 35 months in federal prison for  a 2012 break in at a Tennessee federal security site as part of a plowshares anti-nuclear protest.  She and her two co-defendants cut through the fence at the Oak Ridge enriched uranium storage site where they hung banners, splashed blood and hammered on the walls. Sister Rice faced up to 30 years on the charges brought against her under the federal Sabotage Act.

Rice  spent most of her life teaching in West Africa, and joined the protest movement against US militarism in the 1980s. She’s been arrested dozens of times. In early 2013, Sister Rice sat down with FSRN’s Alice Ollstein to share thoughts on the Church’s treatment of activist nuns, LGBT Catholics and celibate priests, and why she thinks change will come from the grassroots, not the Vatican.