Ukrainian protesters remain on the streets despite president’s ouster 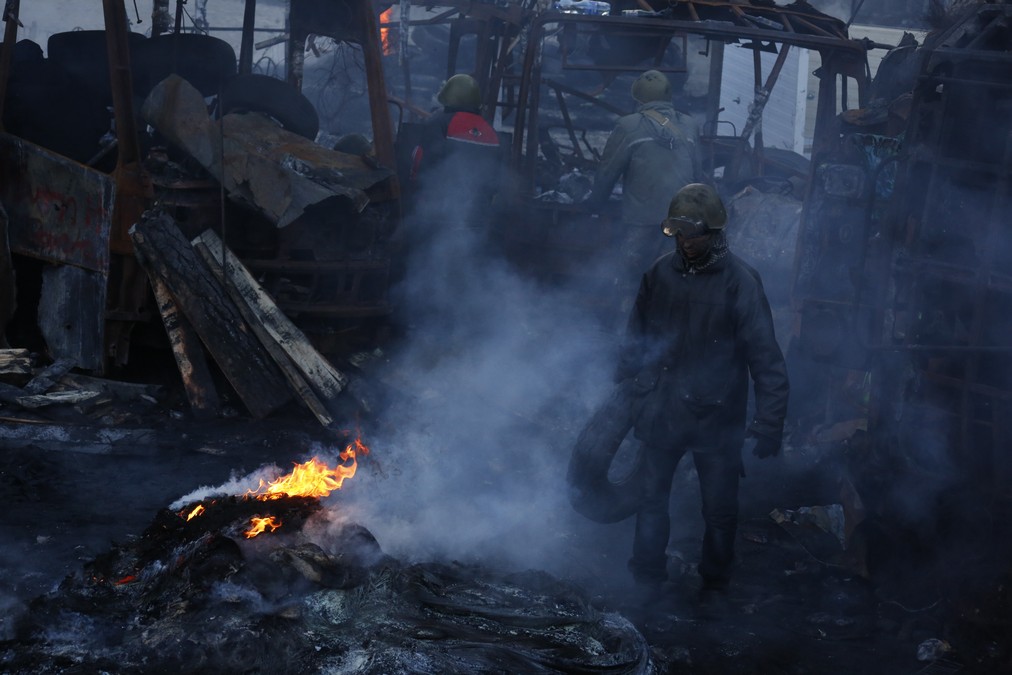 Demonstrators burn tires behind a barricade

Ukrainian parliamentarians voted over the weekend to remove Victor Yanukovich from the presidency and appoint an interim replacement. The Russian government, which supported the Yanukovich administration, expressed doubts today about the legitimacy of the Ukrainian parliament’s decision. Meanwhile, protesters continue to occupy central Kiev, the presidential palace and the prosecutor’s former residence.

This weekend and throughout today, protesters mourned 80 people killed during clashes with police in Kiev. Ousted president, Victor Yanukovich, unexpectedly fled the capital February 21st and is now in an unknown location. He continues to lay claim to the presidency, saying he is the victim of a coup d’etat.

Vladimir Malyshev is an activist from Russia, who went to Kiev in November to support the demonstrators. He says the atmosphere on the street is still tense and people worry that new clashes may erupt.

VLADIMIR MALYSHEV: “People want to change the system. For them, Yanukovich fleeing is just one step toward changing the system. Now the police are saying it’s time to take down the barricades, but people are not going to do it because everybody understands that the faces will change but the system itself will be the same, nothing will change. So, it’s very important for them to reach a logical conclusion and they are striving toward that.”

Former President Julia Timoshenko, who was in prison on what protesters say were politically motivated charges, has been released. She spoke at a rally on Saturday, calling the the protesters heroes for their fight to change the country for the better.

JULIA TIMOSHENKO: “Today we have an open path to build Ukraine as you want. But it’s important to be skeptical of politicians and officials. You must stand firm until you see that the person you trust is elected honestly. We should no longer permit governments to be formed by politicians behind closed doors.”

Ukraine’s indebted economy may receive aid from the European Union, even as Russia withdraws the financial support it had offered after Ukraine backed out of a trade agreement with the EU in November.

The parliament is currently appointing new government ministers and a presidential election has been scheduled for May 25th.