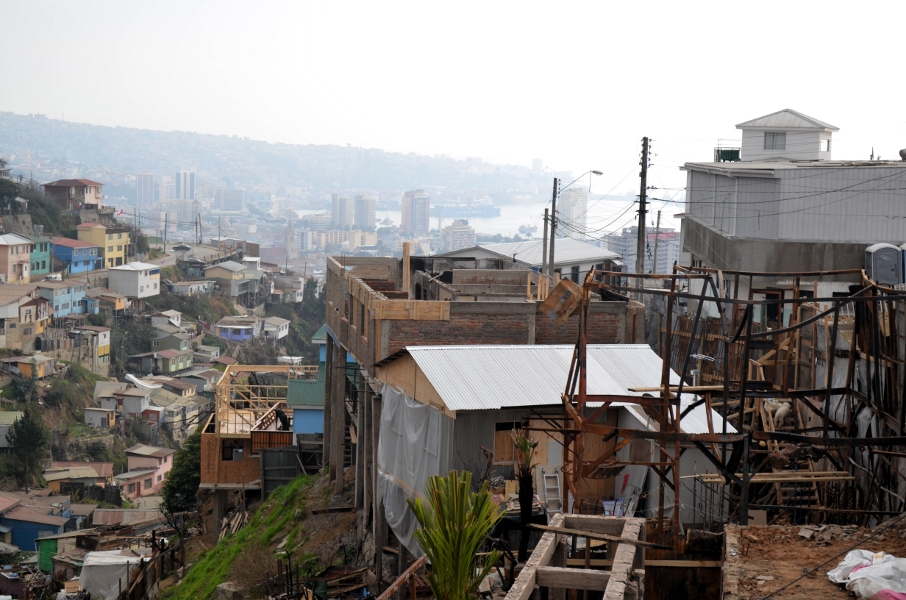 In the Chilean port city of Valparaíso, residents are starting to rebuild after massive fires killed fifteen people and leveled nearly three thousand homes this April. The government is offering housing subsidies to those who lost their homes and is investing in infrastructure improvements to try to prevent similar tragedies in the future. But some analysts say these improvements don’t go far enough: It’s necessary to create new parks, green spaces, and fire breaks in the neighborhoods that burned down this April. From Valparaíso, Chile, Eilís (eye-LEASH) O’Neill reports…

Residents in the neighborhoods burned down in April’s fires are hard at work rebuilding their own homes. The signs of destruction are everywhere. The burnt skeletons of brick houses dot the streets. The wooded ravines between the populated hillsides are full of blackened, charred trees. And residents are living in emergency shelters.

María Isabel Zeledón is one of those living in a government-built emergency shelter made of plywood and corrugated metal. It’s just two rooms: a bedroom, and a larger space that serves as a dining room, living room, and kitchen. And Zeledón still doesn’t have a bathroom. She’s sharing a portable toilet with several of her neighbors.

Zeledón says she was visiting her daughter in northern Chile when the fire broke out. And, while thinking of that night still moves her to tears, Zeledón says the distance saved her from living the nightmare her neighbors and much of her family experienced. When she returned to Valparaíso, her house and everything in it were gone.

Carolina Moraes is an architect with expertise in public housing and energy-efficient homes. She’s been volunteering in the neighborhoods that burned down in April, to help families build new houses or improve their emergency settlements. “The fire affected the outlying parts of Valparaíso – the hilltops,” she said. “And right now we’re going to the place where people—it’s like the newest part of the city, the shantytowns. The newly-arrived families are very vulnerable; they live in very poor places. They had houses made of scrap material.”

One of the neighborhoods where Carolina Morales has been volunteering is the Cerro Ramaditas. Here, the people lived in informal, spontaneous settlements. Families built homes wherever they found space, on old timber plantations.

The dry wood, lack of fire breaks and other urban planning, and the poor accessibility made for a lethal combination, says architect Rodolfo Jiménez, of the University of Santiago: “These neighborhoods weren’t planned. They were occupied by squatters, and they thus have serious problems of access, of services. It’s very difficult for firefighters to get to these places, or for there to be regular trash pickup. As a result, the ravines are full of garbage. And part of the combustible material was the trash that the residents themselves threw into the ravines.”

Now, the government is trying to prevent those who lived in particularly high-risk locations from rebuilding in the same place. Valparaíso’s urban planning secretary Luis Parot Donoso says many of those in the informal settlements are being told they need to leave. But the order to evacuate comes with the offer of aid. The government has already built emergency shelters for all of those who lost their homes in April, he adds. Now, it’s helping people find permanent solutions by giving out subsidies: vouchers they can use to rebuild their homes, buy new homes, and rent apartments while they wait for their house to be ready.

Parot adds that the government of Valparaíso is also planning to improve the city’s infrastructure to help reduce the risk for future disastrous fires: “Our big investments in infrastructure and connectivity will allow people to get around more easily and will make fire prevention—with fire trucks, police, services, ambulances, everything—more efficient. In addition, we’re building a network of water pumps that will take advantage of the grade: that is, that will move potable water from the top of the hill to the bottom and not, as it currently does, move water up from the bottom of the hill.”

But University of Santiago architect Rodolfo Jiménez says these infrastructure improvements, while important, don’t go far enough to renew the affected neighborhoods. He says the government should build more collective housing, such as small apartment buildings in keeping with Valparaíso’s character, to free up space for parks, businesses, and places for recreation and community-building. “A neighborhood should have infrastructure of all kinds: for young people, for children, for mothers, recreational spaces. And, today, because of the hill was occupied spontaneously by squatters, that infrastructure doesn’t exist.”

Without waiting for the government to act, architect Carolina Moraes is starting address these issues. She’s building playgrounds in the affected areas—and she’s simultaneously teaching residents low-cost, energy-efficient techniques, such as covering houses with adobe, they can apply in their own homes.

Isabel Zeledón is one of the residents who learned these techniques from Moraes, and she’s already stucco-ed her emergency home with adobe to improve its insulation.

Zeledón says it’s necessary to keep moving forward. And Valparaíso planning secretary Luis Parot agrees: He says all individual homes will be rebuilt within two years, while larger infrastructure projects will take at least four or five years to plan and execute. In the meantime, architects like Rodolfo Jiménez and Carolina Moraes are trying to fill in the gaps.