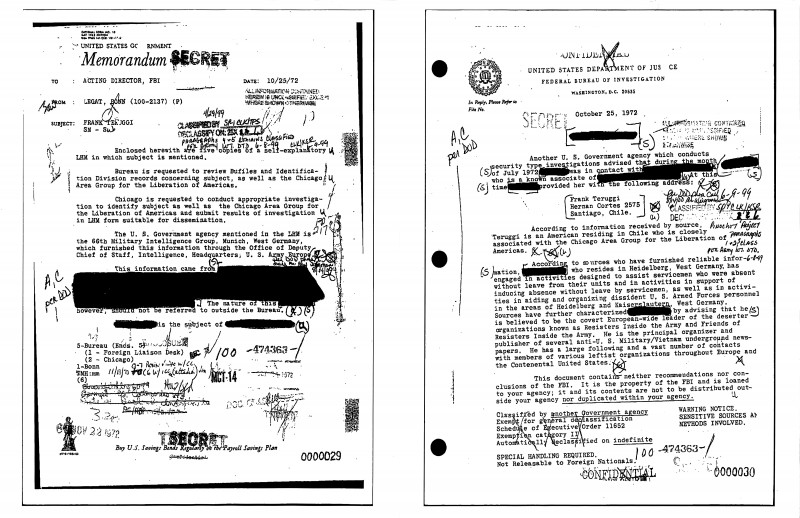 Forty-one years ago this weekend, two U.S.  citizens, Charles Horman and Frank Teruggi were arrested in Santiago by Chilean security forces in the days following a bloody coup . Both were killed and a quest to understand how and why may be coming to close after four decades. FSRN’s Norman Stockwell files this report.

Charles Horman was a journalist and filmmaker who went to Chile to document the reality of Salvador Allende’s democratically elected socialist government. Frank Teruggi was a student and an antiwar activist. He, too, was drawn to witness Chile’s experiment. Both men would be killed in the coup that overthrew President Allende and installed Dictator Augusto Pinochet.

Now after more than  four decades, Chilean Judge Jorge Zepeda ruled this past June that the two men were murdered with the complicity of U.S. intelligence services operating in Chile in support of the coup.

“In December of 2000, the widow of Charles Horman, who was a journalist, living in Chile with his wife Joyce, went to Chile and filed a court case, asking judges to officially investigate who had killed him and why,” explains Peter Kornbluh of the National Security Archive. “We finally have a ruling in this case. This is a major step forward in this long saga. It’s a forty year saga since they were killed, and a fourteen year saga of legal efforts to find out who killed them and why.”

The Hollywood film “Missing” told Charles Horman’s story, but Frank Teruggi’s is lesser known. He grew up in a working class family just outside Chicago and became exposed to Liberation Theology through his Catholic High School.

In 1967, Frank went to college at CalTech in Pasadena, where he started the first Student for a Democratic Society chapter on campus. After hearing about Allende’s election in September of 1970, he moved back to Chicago to raise funds to study Economics at the University of Chile in Santiago. While in Chicago, Frank worked at the Chicago Seed, an alternative paper, and the New World Resource Center, a progressive bookstore and meeting space. 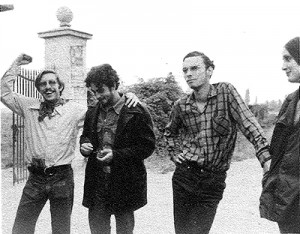 “I would characterize him as reliable and very, very honest and principled,” recalls colleague Burny Farber. “He was committed to a variety of what he viewed as just causes, and, you know, he was willing to put himself on the line a lot of times in terms of devoting his time and energy. He was the kind of person who you could ask him to try and do something and he would come through – he wouldn’t let you down.”

When Teruggi arrived in Chile, he joined up with FIN – the “Fuente de Información Norteamericana,” or North American Information Source. FIN was a collective of about a dozen North Americans that produced a newsletter of translated US press accounts for a Chilean audience.

“We were very much in the spirit of a collective,” Mishy Lesser explains. As a college sophomore, she was was the youngest member of FIN. “So, there were meetings and work was divided up and decisions were made on what articles to focus on and what information to try to make available and what translations to do, and it was not hierarchical, it was tremendously collaborative and people were able to sort of play to their strengths. But it was not easy, and then making that available in Spanish, in good Chilean Spanish, was another challenge.”

On September 11th, a long-planned military coup took place, overthrowing the government of Salvador Allende and bombing the Presidential Palace. Allende died the day of the coup and thousands of other supporters and activists were rounded up in the coming days and held in the National Soccer stadium and other locations.

Many were tortured, hundreds were killed. Among those arrested were FIN contributors Charles Horman, Frank Teruggi and his roommate, David Hathaway. Hathaway was released after several days, but Horman and Teruggi were never seen alive again.

“David was released the next day from the National Stadium and given 24 hours to leave the country, to pack up his things and leave,” recounts FIN member Steven Volk, continuing “… and he asked me whether I would go to the morgue and see whether Frank’s body was there, because nobody knew at that time where he was. And after about maybe 20 to 30, 35 minutes of looking at the bodies that were there that I discovered Frank’s body.”

The reason that Frank Teruggi and Charles Horman were the only US citizens killed remains unclear. The Chilean government today officially estimates more than 3000 people were killed during the coup and its repressive aftermath. The Teruggi and Horman families suspect these men would not have been killed without some sort of green light from U.S. officials.

For the past forty-one years, they have sought answers. Now Judge Zepeda’s ruling may open the door to the publication of evidence that documents how and why these deaths occurred.

“Nobody’s been ever sent to jail for the murder of these two Americans,” according to Kornbluh.”And almost nobody’s been sent to jail, if I know the Chilean cases correctly, for almost any of the executions. All of this, at the time when the U.S. is actively embracing Pinochet, those executions have really never been fully aired, and the people that committed them held fully accountable.”

Judge Zepeda would not comment for this report because the case is still ongoing, but Frank Teruggi’s sister, Janis Teruggi-Page said she and Joyce Horman both look forward to the court’s evidence being made public.

Editor’s note: Stockwell’s longer article on the life of Frank Teruggi can be found online at: http://www.progressive.org/news/2014/09/187856/other-911-seeking-truth-about-frank-teruggi