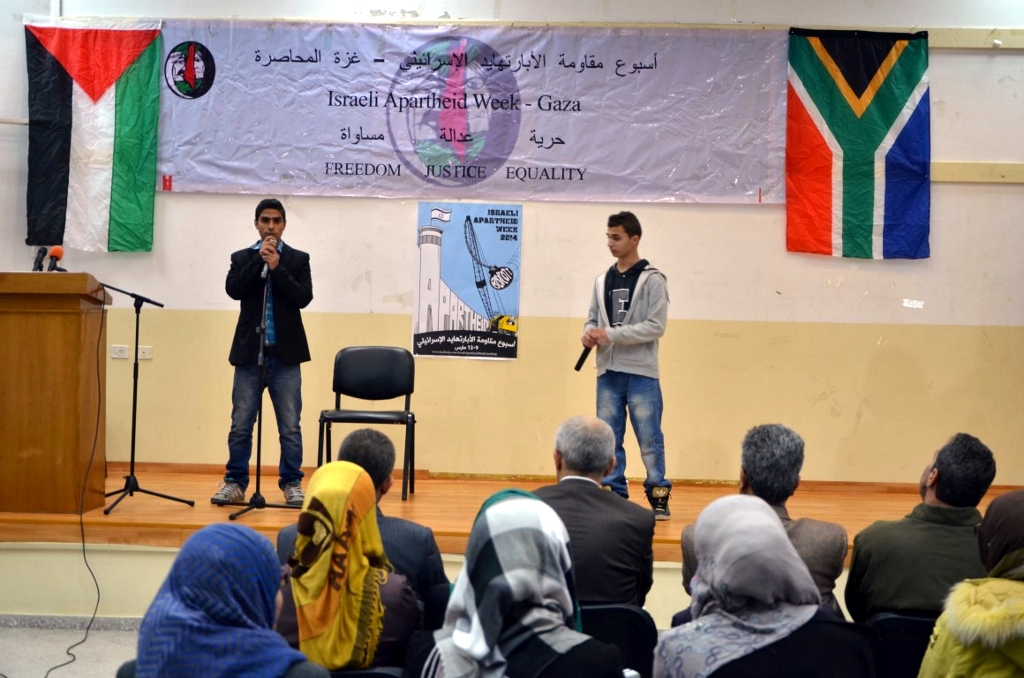 Every year in March, student groups at hundreds of universities worldwide organize activities around Israeli Apartheid Week in protest of Israel’s policies in the occupied Palestinian territories. The activities are meant to raise support for a campaign of Boycott, Divestment and Sanctions – or BDS. FSRN’s Rami Almeghari has more from Gaza.

Representatives of 170 local civil society organizations in both the West Bank and Gaza Strip, kicked off the Israeli Apartheid Week. In Gaza City, about 200 people – including activists with the Boycott, Divestment, and Sanctions campaign, NGO representatives, university students and others – attended a special launching ceremony at the premises of the Palestinian Red Crescent Society.

“As time rolls by, and if we put more pressure and are more active, I think this international solidarity campaign will improve and will increase and I think the whole world will start to support the Palestinians,” says Dr. As’ad Abu Sharekh, a university professor and political activist in Gaza. “I think it will be very embarrassing for the so-called Western democracies not to support those people who are suffering under Israeli occupation.”

During the inauguration ceremony, both local and international BDS activists, including Omar Barghouthy from the West Bank and veteran fighter of Apartheid in South Africa, Ahmad Katharda, delivered speeches to Gaza audiences via recorded video messages.

An academic and economic boycott of Israel has been gaining momentum internationally over the past few years, particularly following Israel’s massive Cast Lead military offensive against Gaza in January 2009. However, some people involved in the Boycott, Divestment and Sanctions campaign often have to contend with accusations of antisemitism for criticizing Israeli government policies.

The week-long Israeli Apartheid resistance in Gaza involves workshops and film screenings about Apartheid and the Boycott, Divestment and Sanctions campaign. The closing ceremony will be held at Gaza’s abandoned sea port, which has been under Israeli blockade for more than seven years now.