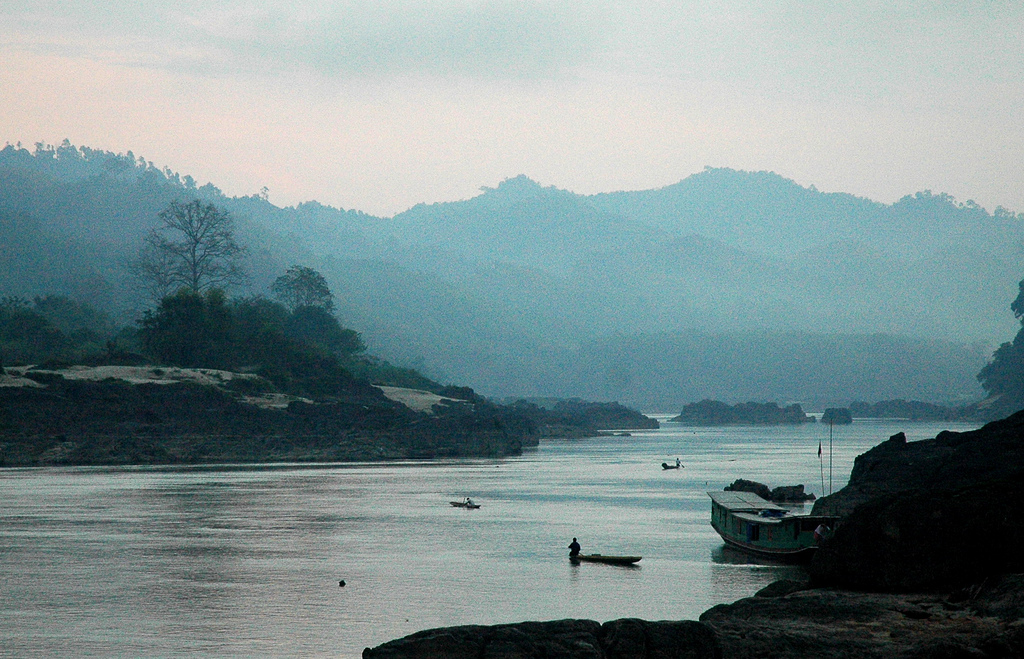 Environmental activists are once again raising concerns over a proposed hydropower dam on the 4,300 kilometer Mekong River’s lower region in Southern Laos, near the border with Cambodia. The Don Sahong Hydropower project, one of eleven dams proposed for the Mekong River downstream, is to be located on the five-kilometer long Hou Sahong, one of the braided channels of the Mekong River just two kilometers upstream from the Lao-Cambodia border. Environmentalist concerns lie in the impact the dam will have on migration by fish, a vital food source to local communities and a further threat to the endangered Irrawaddy dolphin. The planned Don Sahong Dam would follow that of the Xayaburi Dam, located in mountainous regions of northern Laos. Despite protests and concerns raised by neighboring countries, Cambodia and Vietnam, the Laos Government has pressed on with the project. FSRN’s Ron Corben spoke with Dr Robert Mather, head of the South East Asia office of the International Union for Conservation of Nature (IUCN) and initially asked about the IUCN’s key concerns over the project.

ROBERT MATHER: IUCN is always primarily concerned that development decisions are made on the basis of best available science. So the Don Sahong Dam project on the Mekong mainstream is potentially a concern for a number of reasons; that we would like to see better scientific investigation and more accurate information before decisions are made. The first issues is related to migratory fish. As you may know the lower Mekong mainstream is the most productive inland fishery anywhere in the world. A lot of that fish productivity is based on migratory species; some of them migrating up to several hundred kilometers up and down the Mekong.

The Don Sahong area is known to be perhaps the only secure fish passage in the dry season in that part of the river near the border between southern Laos and northern Cambodia. So of course there’s a major concern, what impacts may or may not have on Mekong fisheries, particularly those migratory species that need to pass through the Hou Sahon channel particularly in the dry season when the water level is low and the other potential areas that the fish could get through are no longer accessible.

FSRN: How dependent are the people in Cambodia on the migratory fish as a source of protein?

Mather: Yes, our concern about the migratory fish is not just about the fish per se, but of course the fact that these fish are of fundamental  importance to the food security and the local livelihoods of people living in the Mekong Basin. And of all the Mekong countries that’s perhaps most clearly the case in Cambodia more so than the other countries where people are extremely dependent on not just fish but the other things you find in the river as well as crabs, fresh water, prawns, shell fish and so on for their very survival for their food security and for their income.

FSRN: With the development – and it is going ahead — of the Xayaburi Dam. First of all are there are primary concerns about that going ahead and the potential impact of having two dams in that region of the river on the wildlife?

MATHER: The Xayaburi Dam overall will have less impact, direct impact on migratory fish because its higher up, much higher up in the system and there are much fewer fish that actually migrate that high up in the river. So it’s not of such direct concern for the immediate survival of these migratory fish and the livelihoods that depend on them. There is an issue, a bigger issue with the Xayaburi Dam relates to its impacts on the sediments transport in the river. The sediment that is carried down by the river from the upper areas including from northern Thailand and Laos — that sediment is what feeds the flood plains in the delta in Cambodia but again mostly in Vietnam and maintains the fertility of those areas. The Mekong Delta in Vietnam is one of the most highly productive places within Vietnam responsible for a huge proportion of both their rice production, and their aquaculture production. And of course it is the sediment that is transported down rivers to the coast that actually helps in the fight against rising sea levels that we’re seeing from climate change. If you cut off that sediment supply then you make the job of adapting to climate change that much harder as well.

FSRN: Just finally, how worried would you be if the 11 dams go ahead and are in place over the next decade or so?

MATHER: I think the decision making process – at the moment we have the Mekong River Commission (MRC) which is a body that was established by four countries of the lower Mekong basin, Thailand, Laos, Cambodia, Vietnam. And is intended to bring the countries to work together towards more equitable and more sustainable development of the Mekong River for the benefit of all the Mekong Basin dwellers. What we saw from the Xayaburi – which was the first time that this process was put into play by the MRC was that it was quite confusing; there was no clear end to the process –  a point in time was reached where the Lao Government stated that they believed that the process had ended while the Vietnamese said that they believed it hadn’t ended. There were no clear lessons that came out of that the first time that the process was used towards how do we improve it and make the process better the second time around. But really we don’t see a very good process at the moment and I think that’s quite worrisome and that if things don’t get better and the process isn’t that good then yes the rest of the cascade of another eight or nine dams, whatever it is, will probably …. at the moment business as usual scenario. Is that they will also discuss in a not very good process and will all go ahead. And I think that will basically mean you will be transforming the whole Mekong River and you will be moving to a whole other type of River. Not to say that is right or wrong; you are just trading off one set of values and benefits which is mostly at the moment to do with the natural environment and fisheries for another set of benefits which is to do with hydro power generation, economic revenue generation and providing money for development in these countries.