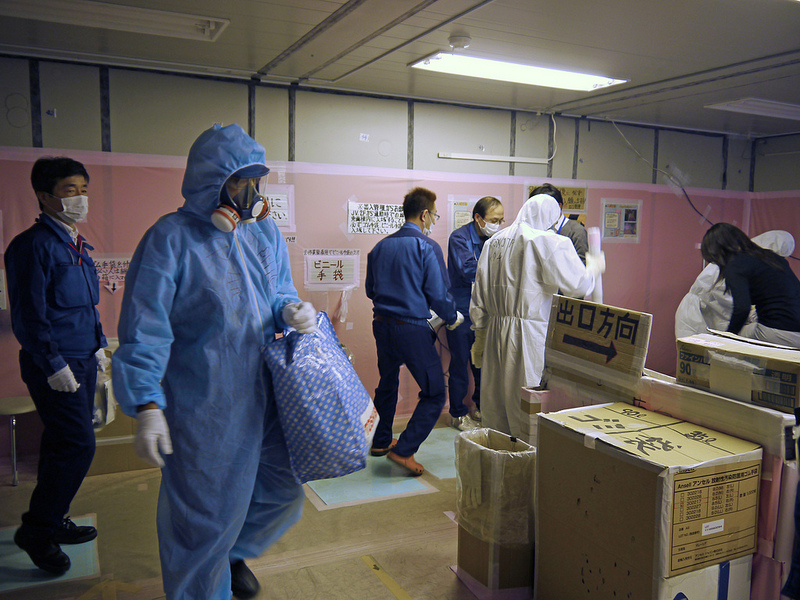 Three years after the Fukushima nuclear catastrophe, earthquake and tsunami, there is still no full explanation – or even consensus – as to what precisely went wrong with all the safety measures supposedly in place at the plant. What is certain is that the events triggered a total loss of electrical power to the plant, which caused the first Level 7 nuclear accident since Chernobyl. What resulted was one of the largest-scale nuclear accidents in history with a great deal remaining to be cleaned up in destruction to the environment and in ordinary Japanese people’s lives. Claudia Cragg reports.


Download
Thousands of protesters marched on the Japanese Parliament in Tokyo this past weekend to, once again, demand a permanent national moratorium on nuclear power. Citing the soaring cost of oil imports and the detrimental effects on the national economy, however, the present Japanese government policy under Prime Minister Shinzo Abe is to restart the 48 idled reactors as early as August this year.

The position of the nuclear industry – via the World Nuclear Association – is that the Fukushima accident has caused no deaths, but rather “resulted in some radiation exposure of workers at the plant, but not such as to threaten their health.”

However, widespread anxiety persists throughout Japan over the true extent of the catastrophe’s still largely unknown radiation and health effects. The World Health Organization mentions only “possible risk” in the Fukushima district closest to the meltdowns, but the number of confirmed and suspected cases of thyroid cancer among people aged 18 or below at the time of the accident continues to rise. Research shows cancer cases related to the Chernobyl meltdown took several years to develop.

The decommissioning of the plant is in the hands of Tokyo Electric Power Company – TEPCO – the very entity that was in charge at the time of the triple meltdown. International offers of help have been largely shunned. mitigation specialists estimate a thorough cleanup will take decades with a skill set beyond TEPCO’s current capabilities. Even now, the spent nuclear fuel from a pool in the reactor building has yet to be recovered, despite a few on and off attempts, and radioactive water in unverifiable quantities continues to pour into the sea.

Dr. Yoichi Funabashi of Rebuild Japan, an organization that works to promote post-meltdown restructuring and renewal says “Japan is fully responsible for releasing all the radiation, TEPCO, it is first and foremost fully their responsibility and the Japanese government is also very much responsible and it is very much regrettable that the Japanese authorities allowed the radiation to be released into the water, too.”

Government prosecutors also recently moved to drop criminal charges against TEPCO for the disaster, meaning not one indictment has arisen from one of the worst nuclear accidents in history. But a large number of civil lawsuits of have arisen from Fukushima.

Personnel from the USS Reagan who rushed to help are suing for claims against cancer arising, they maintain, from their mercy mission exposure. In another legal action, more than one thousand Fukushima residents, along with 400 other petitioners from around the globe, are suing the plant manufacturers — GE, Hitachi and Toshiba — for failing to make safety adjustments to the plant’s aging reactors which were commissioned in the very early nuclear days of 1971.
“They walk away with the profits and we’re stuck with the health effects,” says Cindy Folkers of the U.S. group, Beyond Nuclear. She says the plaintiffs are right to take on the plant manufacturers. “It’s probably a very good idea to push that envelope to see how far they can get especially since it’s a GE design, we have at least 23 Mark 1s and I think 8 more Mark 2s that are the same design as Fukushima in this country. They need to be held accountable and I think that we should try.”

In a Nuclear Accident report released today, the Bulletin of the Atomic Scientists (BAS) adds its support to those voicing doubts about the willingness of Japan’s nuclear industry and its regulators to accept responsibility for human errors which worsened the disaster’s aftermath.

These scientists say the accident was a “human-generated disaster” with faulty management oversight, a clear lack of preparedness for a severe incident at a nuclear power station, and the nonexistence of an independent effective nuclear regulatory organization. Above all, they stress the need for oversight that is independent from any community within the nuclear power village.

Hajime Matsukubo with the anti-nuclear Japan campaign, known as the CNIC, says citizens’ groups across the country are focusing their pressure now on local government authorities to maintain the current moratorium on nuclear power generation in Japan. “Without local government’s approval they cannot restart,” he says. “Several local governments agree with it, but several local groups ask them to stop and we are supporting them.”

The Rebuild Japan Initiative Foundation shares the position that until effective regulation is properly established, the nuclear reactors should all remain shut down.

Dr. Funabashi, Rebuild’s chairman, says the lessons of Fukushima call for new nuclear leadership, better decision-making, and governance… lessons the central government may choose to ignore if given the opportunity.

“There are so many unknowns; we have to be very careful here,” warns Funabashi. “The government simply cannot monopolize the truth. They are sometimes in the dark and the people should not suppose, should not regard the government as the Almighty Father and the government should not treat citizens in a patronizing and condescending way”.

While the current shutdown of all nuclear plants in Japan is considered a victory for the anti-nuclear movement, it may be short lived and relatively superficial. Three years after the disaster, there’s still no sign of any independent oversight with teeth. Meanwhile, an approval process that would allow many of Japan’s nuclear plants to resume operations looms on the short term horizon.