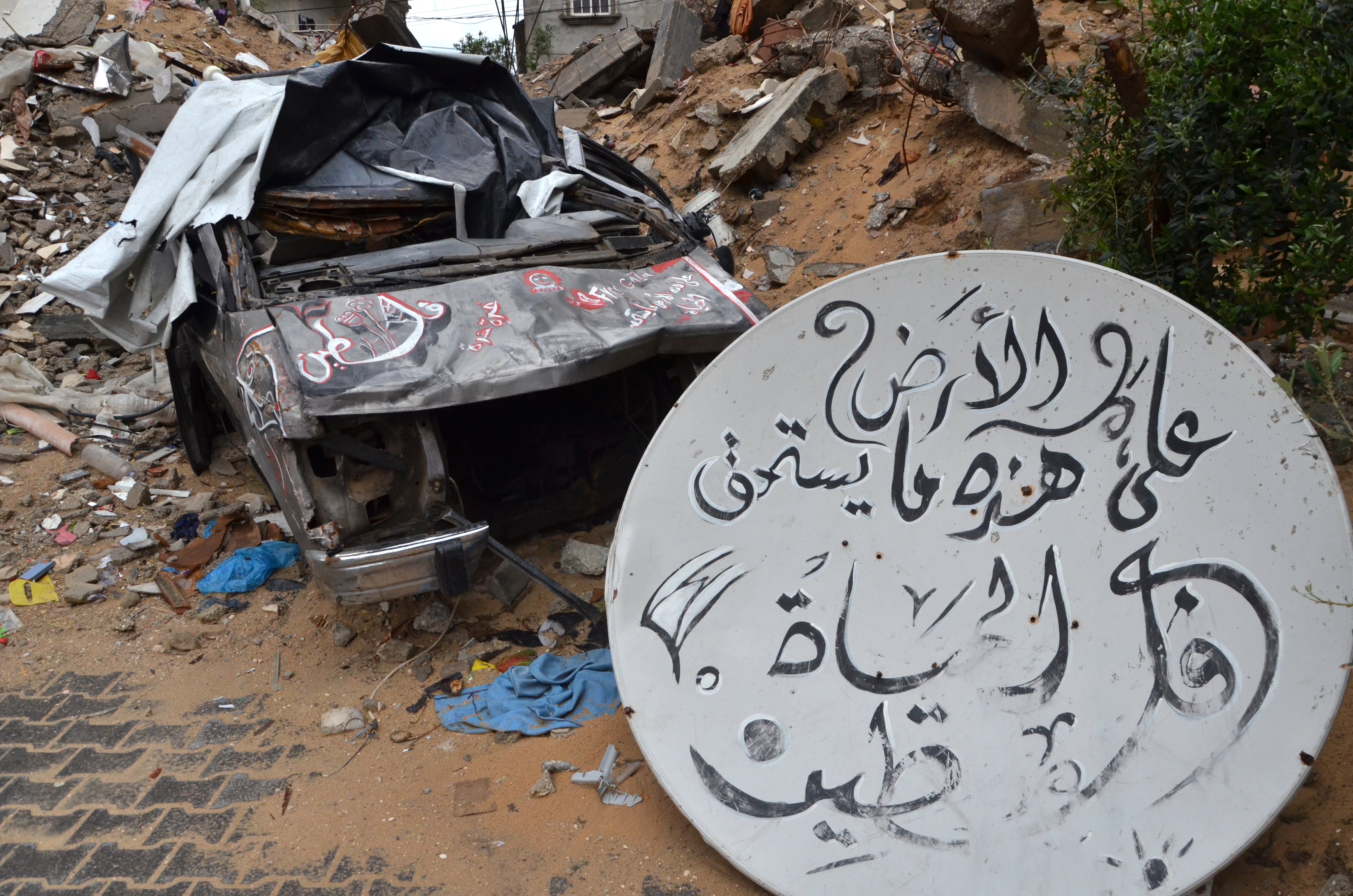 A satellite dish, left over from the destroyed home of Hazem Alzomar's neighbor. The words painted on it read "On this land , there is still a worthy life." (Photo credit: Shadi Alqarra)

An Israeli group called Breaking the Silence released a collection of testimonies this week given by nearly 60 Israeli soldiers who served in last summer’s operation against the Gaza Strip. In the 242-page book, the soldiers describe extremely permissive rules of engagement that allowed troops to treat civilians as combatants. According to a United Nations report, more than 2100 Palestinians were killed in the 50-day offensive; nearly 500 were children. The same report puts the Israeli death toll at 69, including four civilians.

The summer offensive reduced tens of thousands of buildings to rubble. Eight months later, large-scale reconstruction has yet to begin. FSRN’s Rami Almeghari has this story about a team of artists in Gaza turning the rubble into a memory project.

At his home in Rafah city in the southern Gaza Strip, Hazem Alzomar and four fellow artists turn debris from  destroyed homes into works of art. The group began working on the project in January and calls it “Memories.”

Alzomar, a 26-year-old art school graduate, is the driving force behind the project. He says the inspiration for it came from a neighbor whose house was hit by an Israeli missile last summer.

“It occurred to me that those houses are not just rubble, but that they are pieces of memories of the houses’ inhabitants,” explains Alzomar, who began using broken pieces of his neighbor’s home as art material. “Being artists, we wanted to help those affected in our own way, so that’s how the initiative started.”

Art made from shattered former homes fills the workshop. Twenty-two-year-old Elham Al-Astal also works on the Memories project and spends a few hours a day at the workshop in Alzomar’s home. She explains one of her drawings, rendered on a slab of asbestos that was once part of a house.

“I wanted to refer to freedom,” she says. “Though, as you see, the bird is being surrounded by bars. This is to show how the freedom of children, women and men here is being suppressed. The idea for this drawing came from Hazem, after he passed to me an asbestos sheet from the rubble of Abu Ghali’s destroyed home.”

In addition to crafting artwork from the rubble of destroyed homes, Hazem Alzomar and his team have also tried to beautify the drab metal boxes used as temporary shelters.

“We first went to Khuzaa’ with an initiative to paint the metal box shelters there,” he says. “The displaced people were very cooperative and helpful and passed along to us some of their belongings, so that we could preserve the memories behind those belongings.”

The five-member team led by Alzomar receives support in the form of raw materials and art supplies from the Association of Culture and Free Thought, a non-profit organization based in Khan Younis.

“Visual art already exists in Palestinian society, but unfortunately still lacks an identity,” says Hussam Shehada, director of the association’s cultural center. “For instance, if you go to Andalusia, you will notice that Islam once existed there. If you go to Munich, you will learn about music and musicians. And if you go to London, you will learn from churches’ sculptures, about the history of churches over there. Gaza has a mix of various visual art forms that sometimes do not reflect a genuine Palestinian cultural scene. For instance, our visual art lacks figures about Palestinian embroidery or some other figures about the Palestinian cultural heritage, in general.”

The Gaza-based Ministry of Construction and Public Works estimates that about 18,000 houses need complete reconstruction due to damage during last year’s military offensive.

Last October, international donors pledged a total of $5.4 billion to rebuild the tiny coastal territory. Widespread reconstruction has yet to begin, while piles of rubble remain part of the landscape.