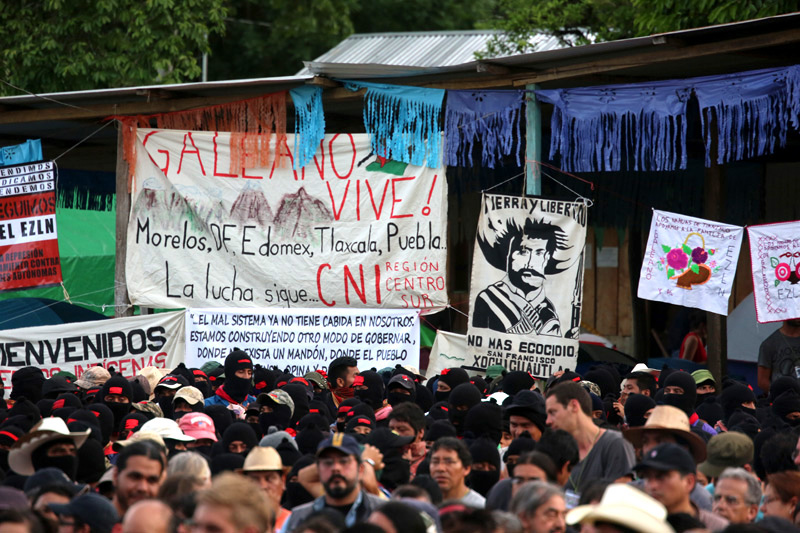 "Long Live Galeano" reads the banner in the background, signed by the National Indigenous Congress. Thousands gathered in La Realidad to demand an end to the on-going violence directed towards Zapatista indigenous communities in Chiapas.

Billionaire Petro Poroshenko gained more than 50 percent of the vote eliminating the need for a second round of voting. But the elections were disrupted by armed separatists in Ukraine’s restive eastern regions following an unrecognized referendum earlier this month as the country slides further toward civil war. FSRN’s Jacob Resneck reports.

The U.S. Supreme Court ruled today in favor of a developmentally disabled man on Florida’s death row, saying states must consider more than just an intelligence test score to determine if a prisoner with borderline intellectual disability can be executed.

The justices ruled that Florida, and by extension any other states, cannot rely solely on IQ score to determine mental disability. FSRN’s Sean Kinane spoke with Mark Elliott, Executive Director of Floridians for Alternatives to the Death Penalty.

A report released earlier this month details the public health and environmental impacts from coal ash, where a spill in North Carolina in February sent 27 million gallons of toxic wastewater connected to a coal ash spill into a nearby river.

Another danger related to coal mining lurks high above residents who live in small towns and hollers in southern Appalachia coal country. Thousands of people live daily with the fear of a possible breach in coal slurry dams above their homes, where the waste from cleaning coal is stored. Two recent reports investigated the threats that exist, but some who would be most at risk are skeptical of the process. Melinda Tuhus reports from Charleston, West Virginia.

Nearly 4000 people traveled over the weekend to the depths of Mexico´s Lacandon Jungle to pay homage to a murdered Zapatista teacher who had been deeply involved in the rebels’ latest initiative and autonomous government. During the event, the EZLN´s iconic spokesperson, Subcomandante Marcos, made his first public appearance in five years only to announce his final act. Tim Russo brings us more from La Realidad, Chiapas.

View a photo essay of the event in the Zapatista community in La Realidad.

Thirty years ago today a bomb went off at a press conference in Nicaragua during the height of the Contra war. Today, journalists in Costa Rica remember the bombing and look for answers to the still unsolved crime. FSRN’s Norman Stockwell brings us this report.

Music used in this week’s program is by Silence, licensed under Creative Commons.