Rio police take over another favela as part of “pacification” operations 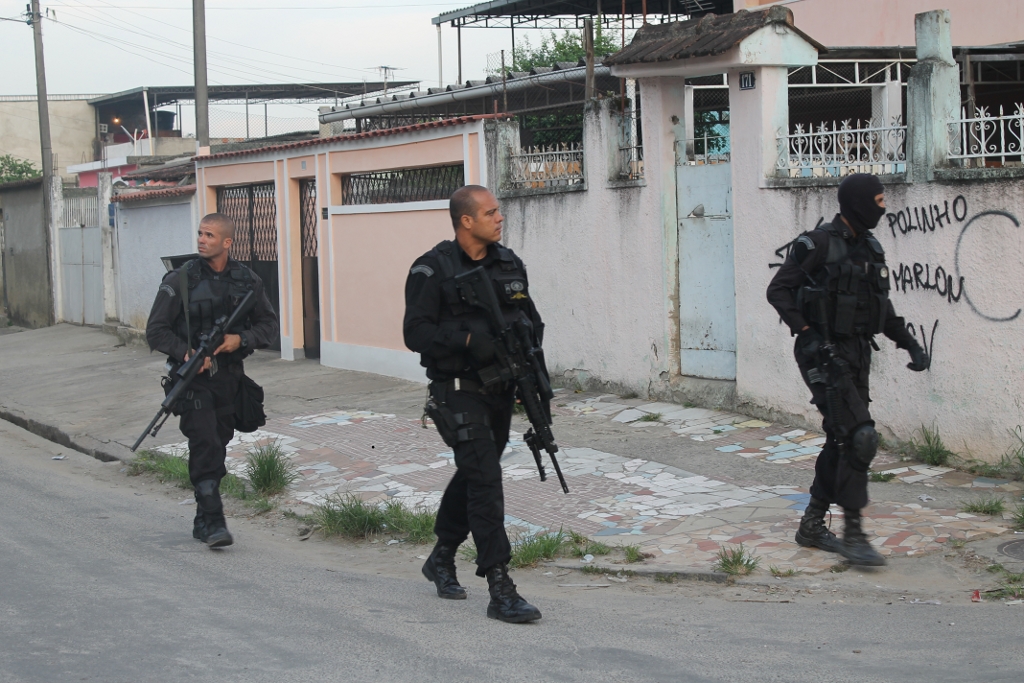 In Brazil, Rio state forces have moved in to occupy Vila Kennedy, a violent neighborhood in Rio de Janeiro. The action is part of the city’s so-called pacification program in which state special forces set up units in areas controlled by organized crime gangs. Authorities in Rio have carried out a number of these operations as the city prepares to host the World Cup and Olympic Games. Although the program has been widely heralded as a success for bringing down local crime rates and increasing property values, the scheme has also been criticized for incidents of police brutality and for not providing promised social services following the occupations. From Rio de Janeiro, Sam Cowie reports.

The occupation of Vila Kennedy, a poor neighborhood of some 40,000 people, on Rio’s peripheral Western Zone began at around 5am.

Vila Kennedy was founded in 1961 as a government subsidized housing project for residents relocated from favelas that were cleared from more prosperous parts of the city. Named after JFK, the area has since suffered from official neglect and in the early nineties fell under the control of Rio’s largest and oldest drug trafficking gang – the Commando Vermelho.

As troops made their way through the neighborhood, some residents were leaving for work. “It was terrible here,” said 22-year-old receptionist Carol Alves. “On my way to work I would walk down this street and see guys on the corner selling drugs in the middle of the street, ridiculous. When there was a war on, the guys were carrying heavy weapons.” Alves said that during the worst times, she used to hear intense gunfights almost every night.

The drug traffickers who control Vila Kennedy have been in a long running turf war with rivals from another nearby favela; Vila Alancia.

Vila Kennedy is the 38th neighbourhood in Rio to receive a UPP police pacifying unit. The program is part of Rio’s cleanup operation ahead of the World Cup and Olympic games.

As with the vast majority of pacifications, the occupation of Vila Kennedy went smoothly. The community was occupied in 20 minutes without a shot being fired.

Major Marcelo Corbage, of Rio’s elite police Special Forces unit BOPE, explained to the press that there are still arms and drugs in Vila Kennedy. He said that with the cooperation of the community, they will gradually flush them out.

At around 7:45, police arrested three suspects and captured a cache of drugs and several automatic weapons.

Rio’s UPP scheme began in December 2008 with Dona Marta favela in Botafogo. While initially regarded as a triumph, over the past year in particular, there have been several well documented problems, the most high profile of which was the indictment of 10 UPP officers in the Rocinha favela for the murder and disappearance of stonemason, Amarildo de Souza. There have also been a series attacks on UPP bases that have led the deaths of several officers.

Valmir Cardoso said that he isn’t worried about police brutality. However, he said that young people in Vila Kennedy are attracted to the drug trade due to lack of better options and simply installing a police unit will not change this. “We’ve always had two police battalions in the community,” said 28-year-old Cardoso. “The problem here isn’t lack of police; the problem is lack of social projects for the kids so they don’t grow up using or selling drugs or doing other bad things. If we have more local jobs and more projects, things will improve. If we just have the police, things will continue the same as they are.”

UPPs are heralded for bringing down local crime rates and increasing property values in the areas where they’re installed. Residents and activists however complain that authorities haven’t followed up the police occupations with adequate investment in local services such as sanitation, schools, public transport and social projects.

UPP critics say the scheme is fuelled by private interests of making the city safer for investment. Coca Cola donates to the  program. A 2009 Rio US embassy cable published by Wikileaks estimated that incorporating Rio’s favelas into the formal city could be worth some $21 billion per year.

Jorge Mello is head of a local association in Vila Kennedy that provides job training for residents. In his office, he recounts tragedies in the community, residents hit by stray bullets during turf battles. He said he was hopeful that the UPP would improve things in the community and felt that the majority of Vila Kennedy shared his opinion. He blames that the lack of investment in infrastructure and opportunities for creating the conditions that lead to violence. “The third and better option is to invest in the community,” added Mello. “The dream of everyone in Vila Kennedy is a community without drug traffic and without heavily armed police.”

Around 11am, a flag raising ceremony took place at the newly established UPP base. A bunch of excited local kids danced and shouted for the cameras, as helicopters landed nearby.